Living in Brazil is awesome.  It’s an adventure.  It’s exciting.  It’s new.  But it is also constantly reminding me that I am not in Kansas anymore.  So, with that, here are some funny little Brazil-isms.

1.) Kitchen Cabinet Installation
So, the cabinets that came in our kitchen originally were crappy, totally insufficient and a complete misuse of space.  Therefore, we knew that when we moved in we would need to buy new cabinets, so we just looked for something cheap that would get the job done.  This was a little challenging because most of the cheap cabinets that they make here are metal – like, high school locker style (which, by the way, is what the previous cabinets were).  It’s weird, right??  Do they do this anywhere else in the world??  Anyway, I just wanted something that was NOT metal and a better use of space.  Casas Bahia is a cheap store that has a lot of kitchen stuff so we found 2 cabinets there and placed the order.  We knew that they would be delivered in a couple of days, but they come in small boxes – Ikea style – with major assembly required.  Thankfully, the products come with free assembly so we called to request assembly with delivery.  Here is the process that followed:
– First they told us that we had to have the actual delivery before we could request assembly because they wanted to be sure that everything was delivered in good condition, HOWEVER if you are getting assembly, you are not allowed to open any of the boxes so there is no way that you would know if anything was wrong.  Does this make sense to anyone?  No?  OK.  Moving on…
– After receiving the delivery, we could then call to put in a request for someone to call us back within 20 days to schedule installation.  Is that not ridiculous??  You wait for delivery to call, then you call and wait for someone call you back to then schedule…
– OK so all of that happened and eventually we got the call back and scheduled it for one morning at 8am.  But, 8am rolls around and no one arrives.  9, 10, 11, 12 o’clock roll around and still nothing.  We call Casas Bahia to see what the problem is and they proceed to tell us that they work completely separately from the installation people and cannot help us track anything, nor can they put us in touch with them.  Unbelievable.
– Finally the guy arrives to assemble the cabinets and tells me that he only has an order for one so that’s all he can do.  I’m like, clearly we have two here.  Two of the exact same thing.  Just do the exact same thing twice.  I mean…  Eventually we figured it out and all is well, but a VERY typical Brazilian experience of bureaucratic, inefficient processes. 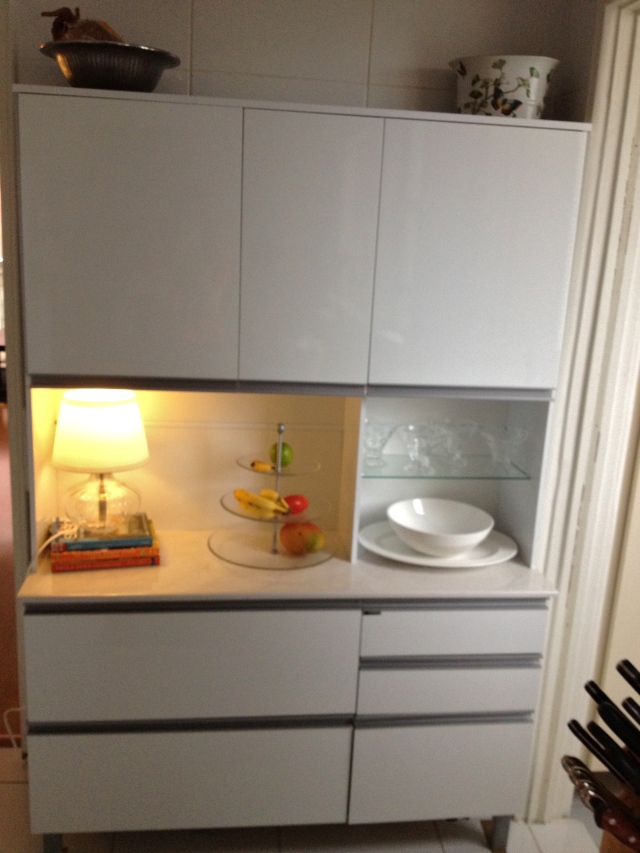 One of the cabinets…

2.) Dishwashers
I have already posted on the fact that when you rent an apartment in Brazil, you buy your own appliances to go with it.   We are going without many things here (a dryer, a disposal – eww) but a dishwasher was on my “must” list.  Now, I realize that this is not very common in Brazil because most people just have maids who do all of the cleaning, but I’m American and I don’t really want a maid, I want a dishwasher.  Plus, you will never believe this, but  kitchens often (ours included) do NOT HAVE HOT WATER.  What?!?!  How on earth do you clean the dishes without a dishwasher and without hot water??  No one knows if it’s even possible but due to the “service” culture here, you will see apartments with helicopter pads on top that do not have hot water in the kitchens.  People just assume that things get clean because the maid cleans them.  OK anyway, with a dishwasher, you get hot water.  ANOTHER reason I was determined.
Since dishwashers here are not super common, selection is not very good.  Also, because they are more of a “luxury” item, they are expensive and usually very small.  The dishwasher in Michael’s office is probably 2’x2′ (max) and this is in one of the nicest buildings in all of São Paulo.  OK, so we ended up finding a freestanding unit that would work in our apartment and (like with the kitchen cabinets) after delivery, we scheduled installation.  The installation guy arrived and started poking around our kitchen.  Soon he told me that the kitchen was not equipped for a dishwasher.  What??  After a while of struggling in Portuguese I learned that we had an “in-hole” for water to flow into the dishwasher, however there was no “out-hole” for the water to get drained.  There was a long tube with the dishwasher but nowhere in the kitchen to hook it up.  He said that my only option was to have the tube hang over the sink and spit the water out there.  So…that’s what we’ve got.  Anytime we are running the dishwasher we have to stick something heavy on top of the tube to be sure that it doesn’t end up shooting nasty water all over the kitchen.
Furthermore, although it is a Brazilian dishwasher, Brazil is in the process of changing their plugs or something so it wouldn’t fit into the outlet.  We didn’t have the right type of convertor at first so the guy who installed it literally attached wires to the end of the plug and stuck it into the outlet.  And…we used it like that for about 3 weeks…  Eek.  Thankfully no one was electrocuted before we found the right convertors, but it looks like an even bigger mess with all of the plugs, cords and tubes going all over.
And still, even after all of this, our dinner plates don’t fit in the dishwasher.  Actually, they don’t really fit in the cabinets we bought either.  And they are normal dinner plates!!
Oh, and the other day, Michael put laundry detergent in the dishwasher (since here they are both powdered soaps) and you can guess…bubbles and water EVERYWHERE.  I love you Michael. 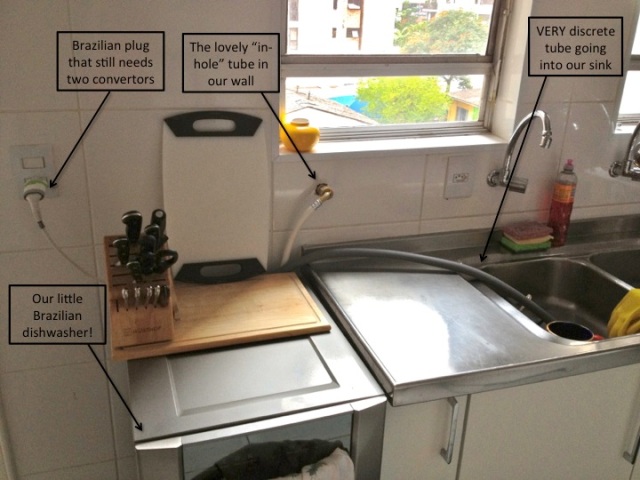 Seriously. This is Brazil.

3.) Washing Machine
This one isn’t really a big deal but I think it is a little funny.  We bought a washing machine and when it was delivered we realized that it didn’t fit through the kitchen doorway into the laundry area.  We had to literally rip off part of the door frame to get it through, but for about 3 weeks we had an enormous washing machine sitting in our kitchen.  🙂

4.) Couch / Wardrobe Delivery
The theme of things being too big continues — from dinner plates to washing machines to our couch and wardrobe… Our shipment of ALL of our stuff finally arrived two weeks ago.  (I will post on that soon!)  Everything made it in OK until it came time for our couch and an Ikea wardrobe that we had.  Now, these are not huge items.  Not even all that large.  We have this couch from Pottery Barn and a random wardrobe from Ikea.  However, they would not fit through the stairwell or the elevator.  So, what happened?  Well the movers left the two items in our parking spot in our building’s garage (since we don’t have a car yet) and returned the next morning to hoist them up THROUGH THE WINDOW!  We have a large window in our living room and the movers said that it could fit through there, but please keep in mind that we live on the 4th floor (which in the US would be the 5th floor since Brazil counts the first floor as “0”) of this building.  They acted like this was somewhat regular so I expected them to return the next day with some type of pulley system.  Nope.  Just a bunch of ropes, men and muscles, pulling our furniture up through the window.  Ri-diculous. 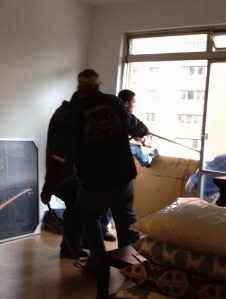 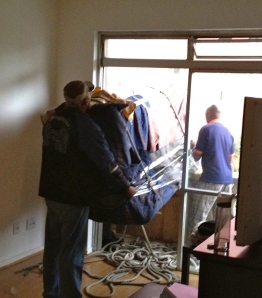 5.) Cashing a Check
The other day I went to a bank to cash a check.  Simple.  At the first bank I went to I waited in line for almost an hour (it must have been pay-day or something?) and then finally a woman told me that I couldn’t cash it without my original passport as proof of identity.  (Normally I carry my CA Drivers License and then just copies of passport and Brazilian documents.)  I tried to ask her something and she just started yelling, “No MONEY for you, no MONEY for you!!!” in front of everyone.  For a second I thought that I was in a weird Brazilian remake of Seinfeld but then I almost started crying so I ran out.  Later in the week I went to a different location, armed with my passport, ready to go.  The bank had a glass revolving door with 4 sections so I walked into a section and started pushing on the door like a normal person.  Then, just as I took a couple of steps and had gotten trapped  in between the outside and the inside, the door stopped and an alarm started going off!  I was so confused.  I was just trying to get inside!  I wasn’t armed or suspicious, I mean, what was going on?!?  The security guards came over to me and started yelling things at me but I couldn’t understand.  I was trapped in the glass and everyone was staring at me.  I felt completely embarrassed AND completely helpless.  Finally a woman who spoke English came over and asked if I had keys or a cell phone.  Yes, of course I did.  Those are normal things to have.  She told me to drop them in this little bowl in the door and once I did, the alarm stopped.  I don’t know exactly what happened but soon the door was moving again and I made it in.  Then, feeling like a serious CRIMINAL, I was finally able to deposit my check.  Whew!

6.) The Alarm
Speaking of alarms… last Friday afternoon I wasn’t feeling well so I was laying down, trying to rest.  Just when I was getting comfortable, an alarm started going off.  Now, I hear car alarms going off relatively regularly from our apartment, so at first I didn’t think twice.  This one was a little different though because rather than just being noise, it included a portion in Portuguese.  Also, it did not stop.  After 20 minutes I went to the window to look for the source.  I couldn’t tell where the alarm was coming from but aside from some other people in the apartment across the street looking out their windows, everyone on the street seemed to be acting normally.  After about 45 minutes I started getting worried that I was missing some serious warning.  I called Michael but there was no way for him to tell what it was.  He said that he would ask our doorman when he got home in a couple of hours.  Well, sure enough, a couple of HOURS later, it was STILL going off.  Michael told me it was just a motorcycle alarm that was making noise followed by the announcement, “Attention, this vehicle is being robbed.  Please call XYZ.”  In total, the alarm went off for  over 3 hours.  Needless to say, I did not get any rest.