How far along: 14 weeks today
Baby updates: Baby Harper is 3 1/2 inches long – about the size of a lemon!
Mamma updates: I’m still not feeling great, although Michael says he thinks I’m doing much better.  Maybe I just don’t quite remember how bad it was, but I’m still feeling tired and a little sick to my stomach.
Weight: -2.3  Although putting on weight has still been pretty difficult, Michael and I are definitely noticing that my body is changing which is exciting.  In the meantime, I am eating as much as possible and sneaking in supplements (like Ensure powder) to try to add on calories whenever I can.
Best moments of the week: This week was nice and relaxing — Friday was a São Paulo holiday so Michael and I had the day off!  We spent a lot of time this weekend researching baby gear and trying to decipher what will be worth bringing back from the US and what we have space for in our little apartment.  We made some major headway, but I still welcome any & all suggestions — especially on the little things, tips & tricks, books, etc. so mamas – let me know if there was a certain thing (or list of things) that you loved for your baby!

Since I have just started documenting the pregnancy journey, I wanted to get down a few notes about what the first trimester has been like before we jump too quickly into the second.

Top 5 – Highlights:
1) Obviously, the first highlight of pregnancy was finding out that we were pregnant.  We were hoping to get pregnant so I was paying pretty close attention to the calendar and took my first test on day 29 of that cycle.  The first test looked pretty negative (the faintest of faint second lines could barely be detected), but I proceded to take 1 each morning until we got a sure positive, 4 days later…on the morning of my first day of work.  🙂  So that was quite the day.
2) The next major highlight was our first ultrasound at 7 weeks, 5 days, where we got to see the baby for the first time and hear the heartbeat. 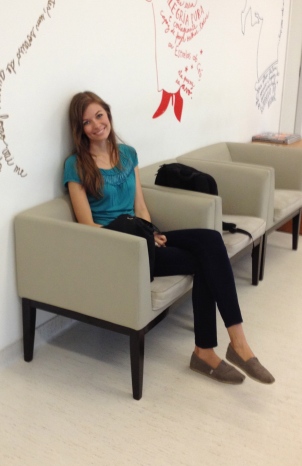 Waiting to go in for ultrasound #1!

This was still before we had shared the news with anyone and it was a moment that Michael and I will always remember and cherish together.
3) Another huge highlight is that we were able to tell our families in person over Christmas break.  I always assumed that living here, we would probably have to share news like that over the phone or something, so we were especially thankful that God orchestrated the timing which allowed us to tell them in person.  I’ll post about the holidays soon and include more details on it then, but that was very special for us.
4) The next fun blessing was last Thursday’s ultrasound that I posted about before.  It’s hard to explain but part of me was wondering if there was even still a baby in there!  It’s weird when you can’t really see anything growing so it was a relief to be able to see it again, hear the heartbeat, and learn that it’s doing just fine in there. 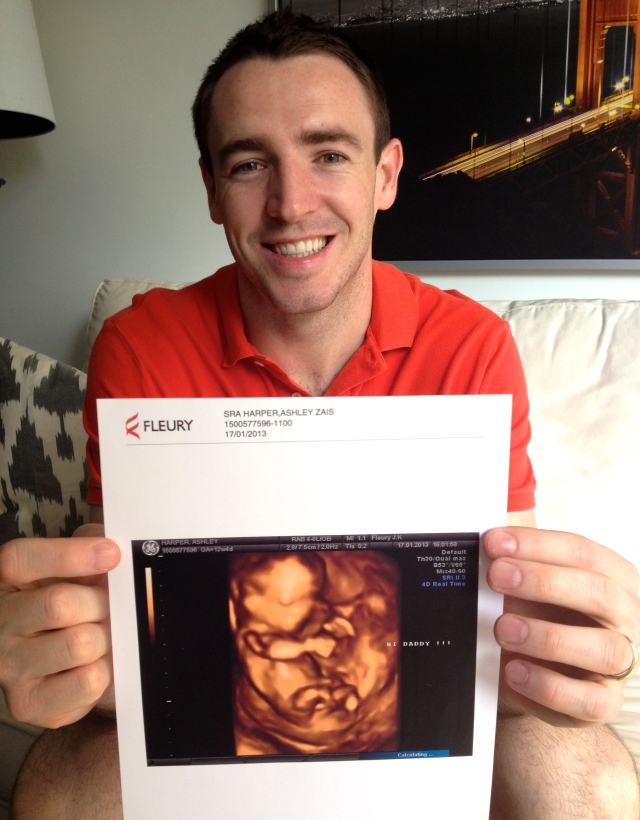 The technician wrote “Hi Daddy!!” on this one.

5) Finally, it was so much fun getting to share the news.  Everyone has been tremendously encouraging has just made us feel totally surrounded by love and support.  So thank you!!

Symptoms:
I do count myself as fortunate because I have only thrown up once so far.  That being said, it has not been an easy couple of months.  I didn’t really feel anything at all until about mid-way through my 6th week, and then it all started to hit.  I have had major exhaustion where I just wanted to sleep all day.  I felt nauseous, sick to my stomach, I had no appetite whatsoever and had strong aversions to lots of foods that had previously been some of my favorites!  Further, I started getting daily headaches around 5 or 6pm when my body would just start shutting down and all I would want to do is sleep.  All of this has not been awesome and has rendered me pretty much useless.  And to be honest, I’m still kind of in that useless stage.
Thankfully I have a husband who is the opposite of useless and has been beyond incredible.  Michael has cooked almost every meal (including making me morning smoothies!) and has basically done all of the dishes, grocery shopping, and generally everything else to allow me to rest and focus on taking care of myself.  I can’t imagine how tired he must be of this first-trimester sickness business, but he’s been so kind to me and made me feel very lucky and loved.

Emotional Experience:
Of course the overriding emotion throughout the pregnancy so far has been thankfulness and excitement.  However, there have definitely been times where other things have crept in as well.  First of all, it was a little emotional to be starting a new career at the very same time that we learned about the pregnancy.  Then, the sickness and exhaustion are a little emotionally taxing, but it never felt too badly because it has always seemed like a temporary condition that was sure to change eventually (right?!).
Also, I don’t know if other people go through this, but there was a period of about 48 hours where I felt very nervous about the way our life will soon be changing.  The truth is that I love our life.  I like it just being Michael and me, doing whatever we want, sleeping in late on the weekends, going off on fun trips at the drop of a hat, enjoying date nights together…and I felt a little panic-y about the idea of all of that changing.  And it’s weird to have thoughts like that when you know that the decision has already been made and the baby is already…there.  Naturally, these thoughts made me feel mega-guilty and embarrassed so of course I didn’t want to tell anyone, but I did tell Michael.  He was super comforting and told me that it’s normal to be a little freaked out about it, but that it will be so great and just add to the adventure of our lives together.  Honestly, just talking about it made me feel better and I haven’t felt this way since, however I wanted to share it just in case anyone else ever finds themselves feeling this way.

OK – well this has been a LOT already so I’ll stop here!  Here’s to the 2nd Trimester being better than the 1st. How far along: 13 weeks today
Baby updates: Baby Harper is currently the size of a peach!
Mamma updates: I’m still not feeling too well and haven’t been able to shake the exhaustion yet, but I’m hoping that the 2nd trimester “honeymoon” phase kicks in soon. For now, I’m thankful that I have a husband who takes care of me (and everything else).
Weight: -2.5 I have had a bit of a tough first trimester that I’ll write more about soon, but the nausea, upset stomach, lack of appetite and aversions to lots of foods has caused me to lose a couple of pounds. I am working hard to eat as much as possible and gain it back, but I think it’s pretty normal and should all work itself out soon.
Best moments of the week: This was such a special week for Michael and me. We had a pretty important ultrasound on Thursday which checked to ensure that the baby was healthy and developing on track as it should, and everything went really well. 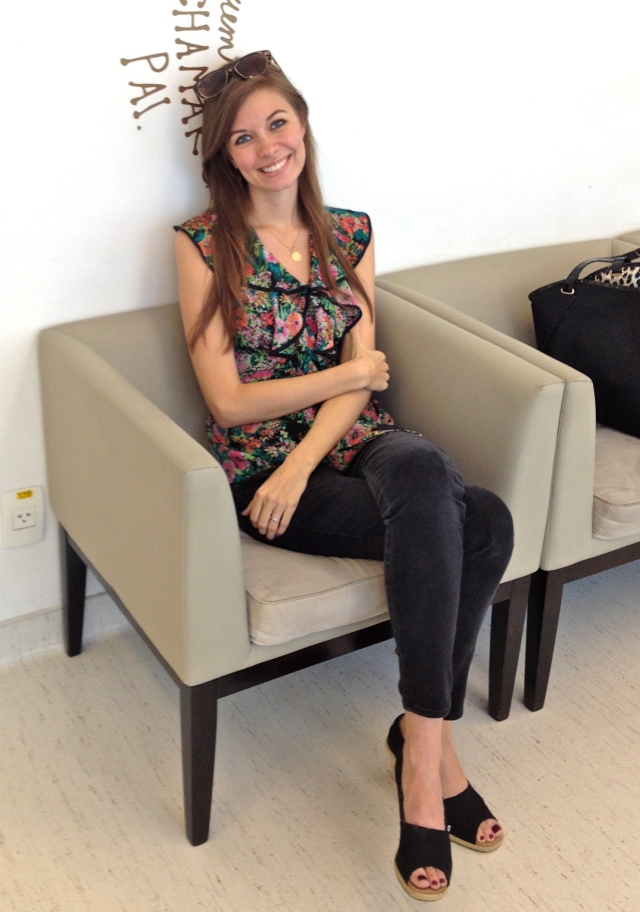 Waiting to go in for our ultrasound!

We had a great technician who spoke really good English and explained everything very thoroughly It was such a wonderful feeling to see that there is in fact still a baby in there and that the baby is developing just as it should. This then led to the next wonderful part of the week — sharing the news! Michael and I felt so overwhelmed by the love and support that we received from friends and family and are so thankful for the blessing of having so many wonderful people with whom to share our joy.

We’re pregnant!! And we couldn’t be happier.

Michael and I are so excited to announce that we are expecting in late July.
Baby Harper’s official due date is July 28, 2013, and yes, our little baby will be born a Brazilian.   🙂

It’s been far too long since I last posted, so forgive me as I do a little catching up.  First, to warm you during these cold, winter days in the US, check out our beach weekend trip from December! 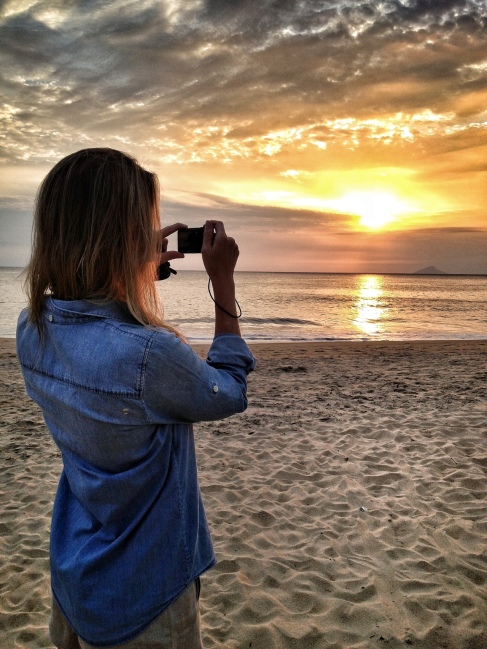 With 12 of our friends and an adorable little dachshund, Michael and I headed 3 hours outside of São Paulo to the city of São Sebastião to a little secluded beach called Praia de Paúba.  We rented a house right on the beach and spent the weekend exploring the area, hanging out on the beach and cooking amazing food. 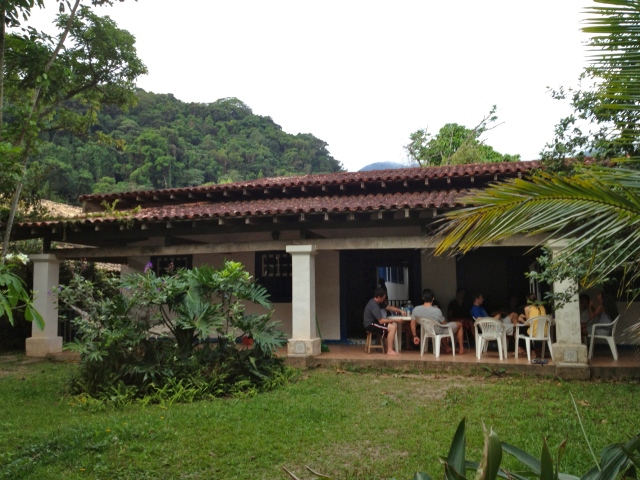 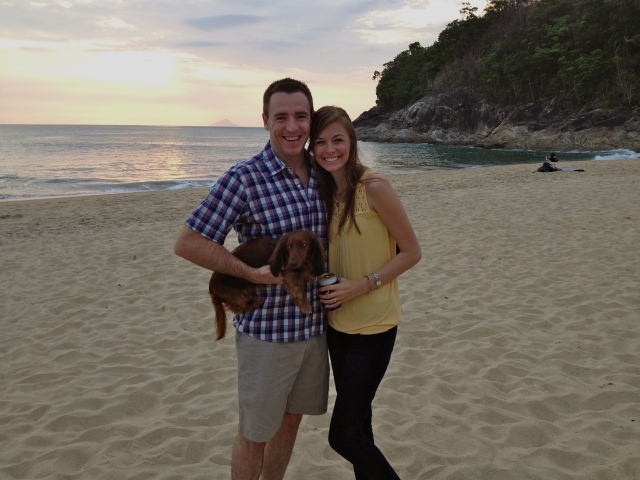 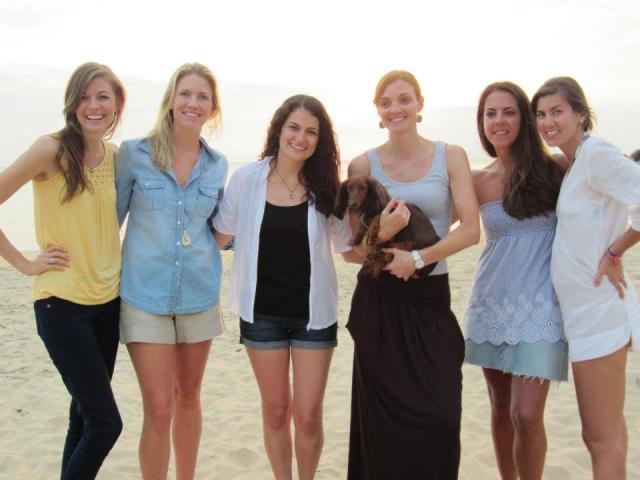 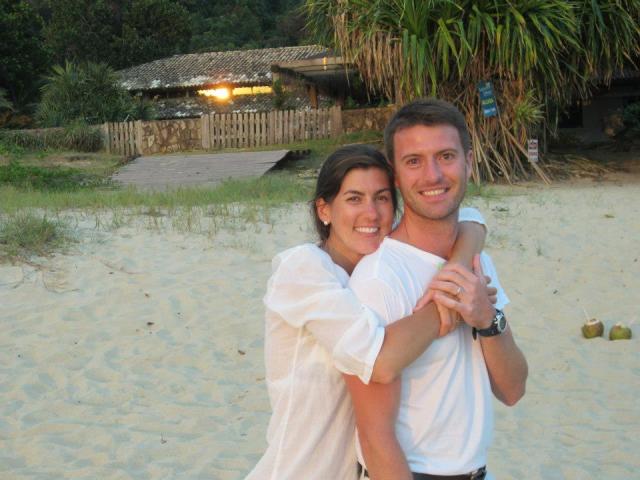 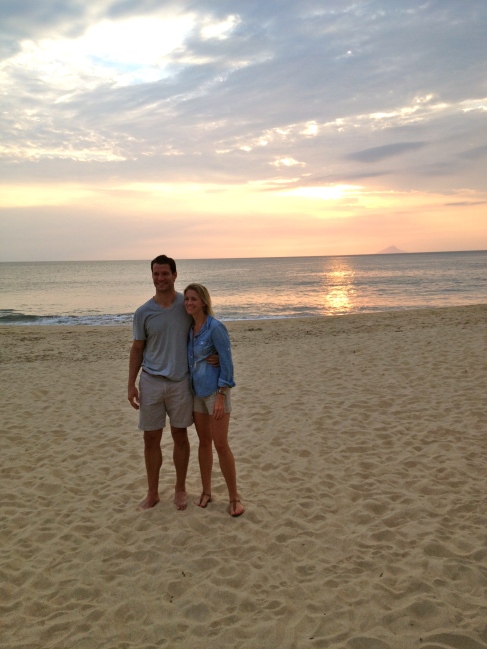 For me, the highlight of the weekend came on Saturday night.  We were all hanging out on the beach, playing games and generally being idiots, when we realized that about 200 yards down the beach, there was a wedding reception in full swing.  Michael led the charge for the group to go join the party, which I thought would surely end in an arrest of some kind.  We arrived and started dancing in front of the gate into the reception, and much to my surprise, the bride and groom came out to the beach to dance with us!  A bunch of other guests came out to join them as well and before I knew it, our friend Brad was leading the entire party in the Macarena!  What I wouldn’t do to have some type of video/photo documentation of this… 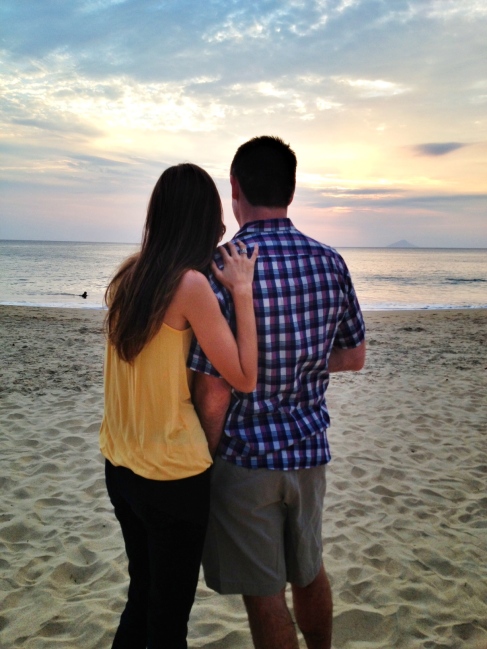