Almost 3 weeks ago, Culhane and I went to South Carolina to visit my family for a couple of weeks. Michael had a conference in DC in the middle of our visit and was then able to swing through South Carolina for a few days as well, but it was the first time that Colt and I traveled by ourselves. I was a little intimidated by the idea of a 10+ hour flight with an infant by myself, but God was with us and it was better than I could have hoped. Our flight was an overnight (leaving at 2:30am SP time) so Colt fell asleep at home before we even left for the airport. He woke up at the airport but fell asleep again before we boarded and he didn’t wake up until 8am South Carolina time. He ate, played and was up for 2 hours but then fell asleep again until we landed. Easy-peasy! I was VERY thankful that there were empty seats on the plane and I was able to bring his carseat on with us as that was key.

GOOD (aka sleeping) baby on the flight!

Normally we fly into the Columbia airport but there was a direct flight from São Paulo to Charlotte and when flying solo with a baby, a direct flight is so much easier than having to change planes (and re-check bags, go through security again, etc. etc.) so my mom happily agreed to make the drive and meet us there. Colt was awesome on the flight but when we landed he was definitely ready to stretch his legs so my mom drove us straight to Bojangles where I had a huge cup of coffee and Colt was free to move around and make noise! He was SO happy to see my mom and she immediately became his new favorite person. My mom said she thought he could tell that she was my mom and that maybe that’s why he took to her so well. 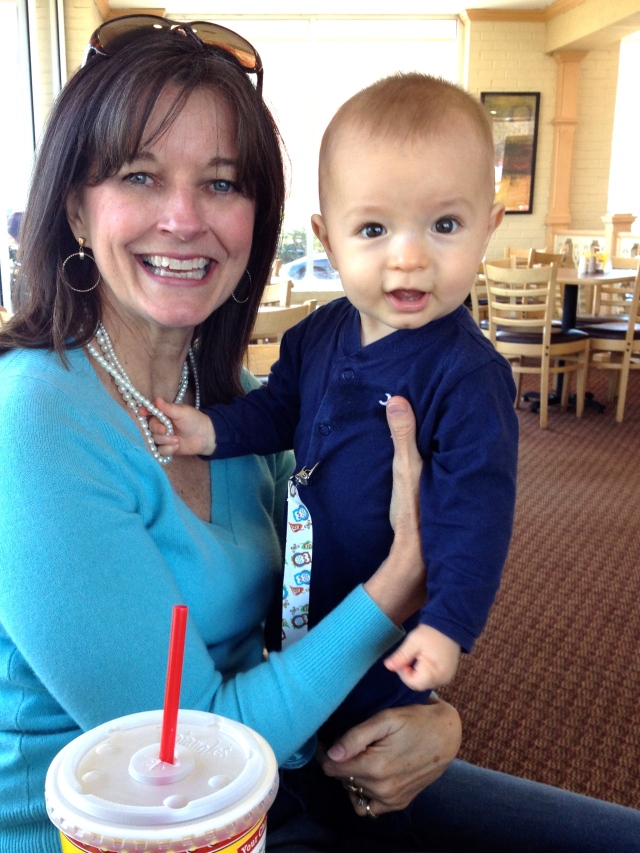 When he was ready to take a nap again, we hit the road and headed home. After a bath and a change of clothes, he was all cleaned up and ready to play.  He even insisted on wearing the overalls that Brad and I wore when we were his age!

Although my mom had already stocked up on baby food and some of my favorites, we wanted to pick up a few extra things so we took Colt to the grocery store and strapped him in the cart. I know this is a really ordinary thing, but since we usually walk to the grocery store in São Paulo, he had never done this before! Clearly he loved it. 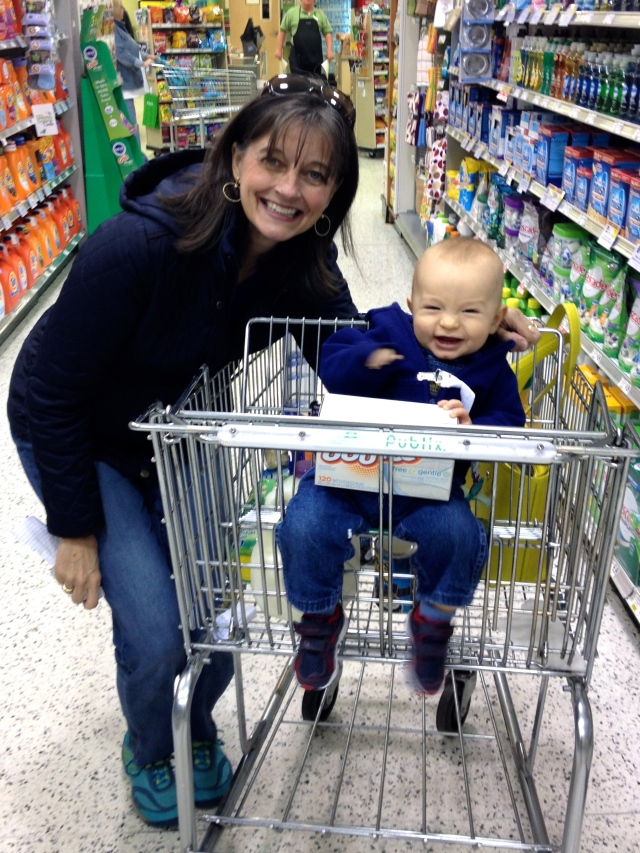 We were all happy campers when Colt spotted the caramel cookie crunch Talentis!

Colt was so happy to be in South Carolina and loved seeing his Pasha too!

Colt is usually a pretty chill, easy baby but during our time in SC he was extra easy, even by his standards. He immediately adjusted from the flight and to the time-zone (only 1 hr off) and was just super fun and playful the entire time. My mom couldn’t wait to take him to the park down the street and we had a blast!

We also tried lots of new foods while we were home. Here he is enjoying some yummy black beans – a great finger food! 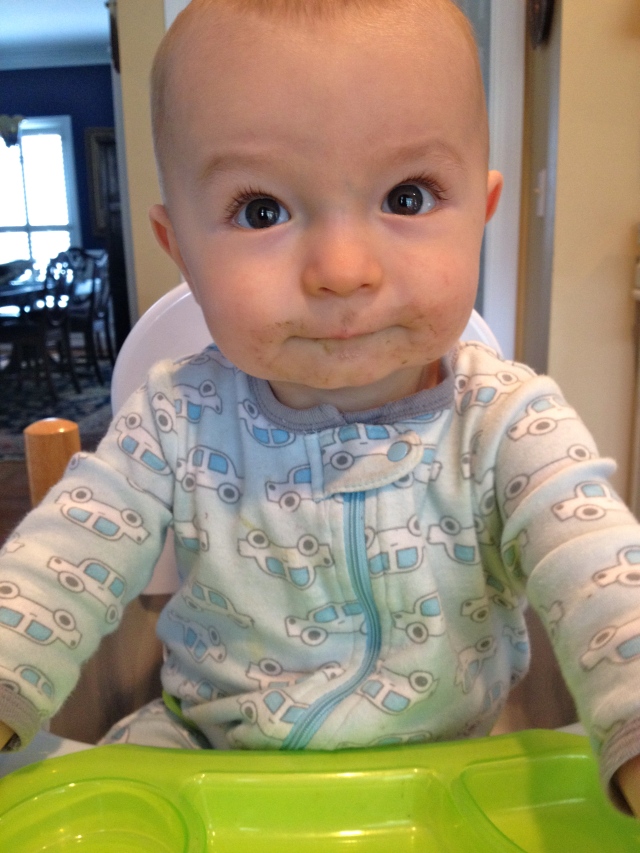 One evening my mom, Colt and I drove to Charleston to have dinner with my brother, Suzanne and Augusta Clare. Brad & Suzanne recently built a beautiful house in West Ashley and it was awesome to see how great they’re doing there. Plus it was really fun to get Colt around Augusta Clare! She was such a sweet big-cousin with him. 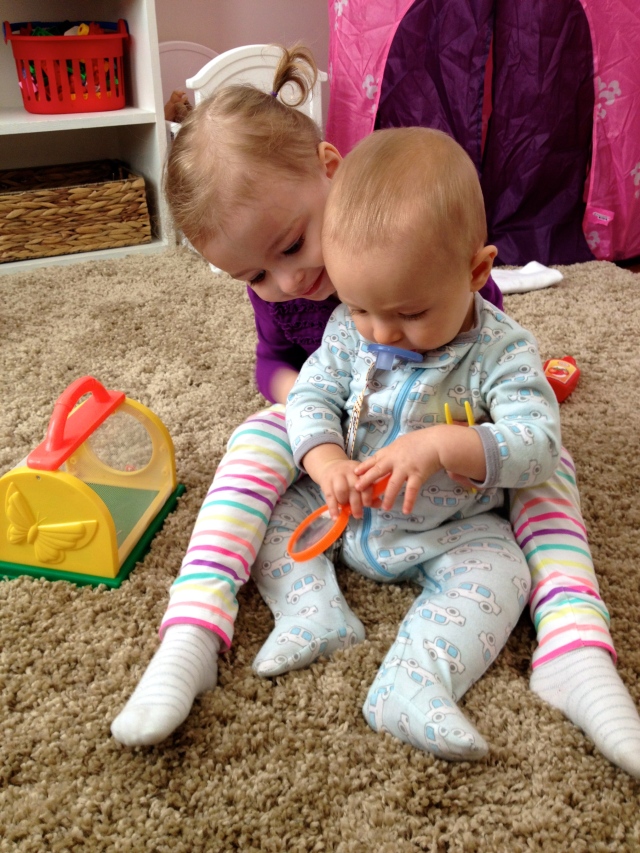 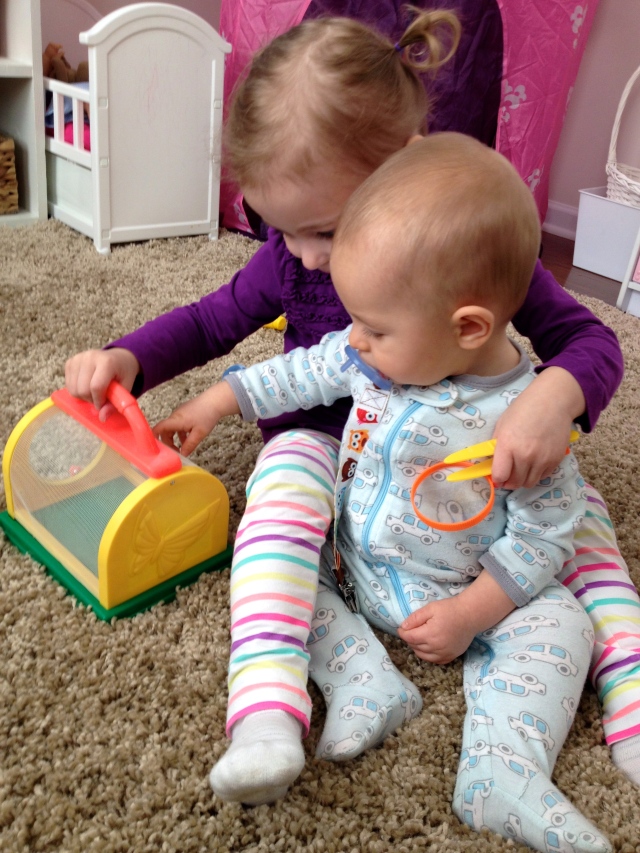 Then, over the weekend we were so happy to have Michael come visit with us!

He showed up and ran a 5K with my cousins, Beau & Henry. Despite the rain, Henry won his age group and both Michael & Beau came in 3rd for theirs!

Beau & Dolores were kind enough to have us over for dinner that weekend and Culhane quickly became best friends with his new favorite babysitter, my sweet cousin Margaret. She was awesome with Colt!

On Sunday, while we all enjoyed a beautiful service at my parents’ church, Culhane enjoyed the church’s nursery and riding around in the 6-person baby-bus! So funny.

Sunday afternoon, we had some family over to visit! 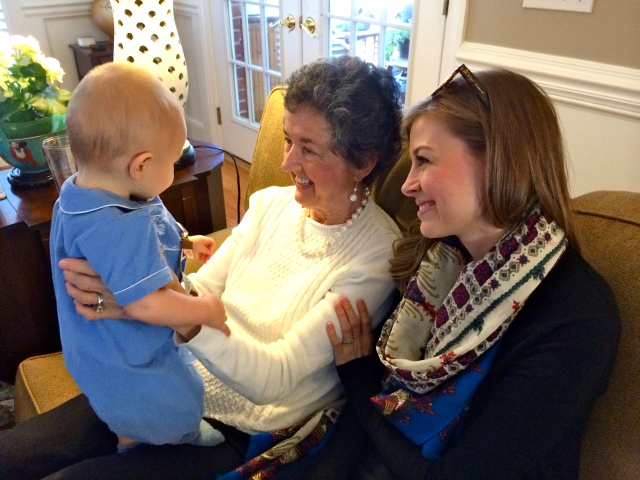 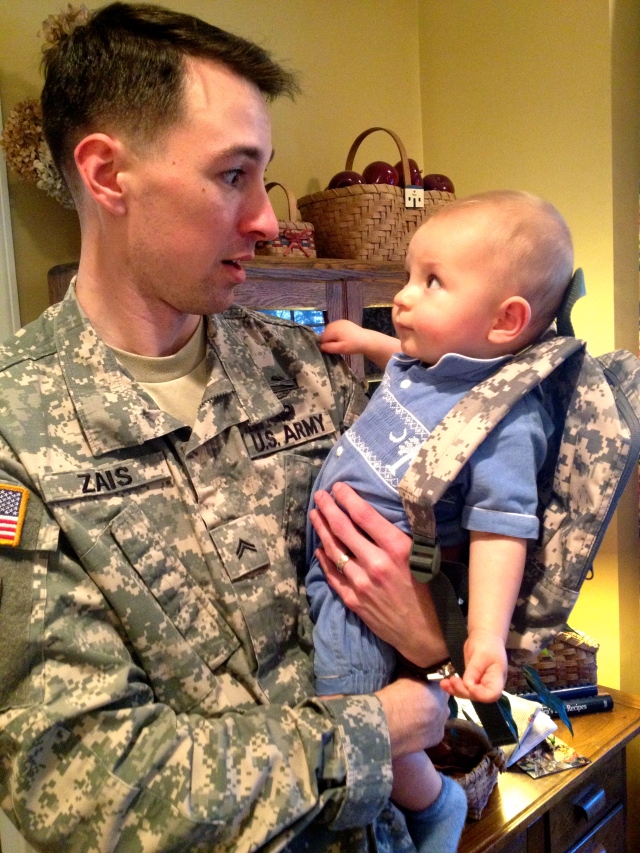 Colt trying to be a little solider like Uncle Brad (SC National Guard!)

Augusta Clare loved Michael! And I think it was mutual.

On Monday, my dear friend Meredith was so sweet to take a day off from work to come visit us. We played all day long but never remembered to take a picture until she was on her way out and Colt was asleep! 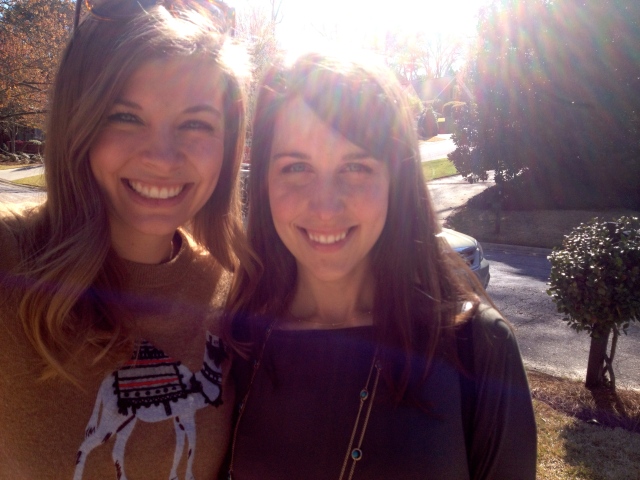 The next day another dear friend, Bess, came to visit! We went to the park and did a slightly better job taking some pictures! I just ask that next time you bring Mary Carol!! 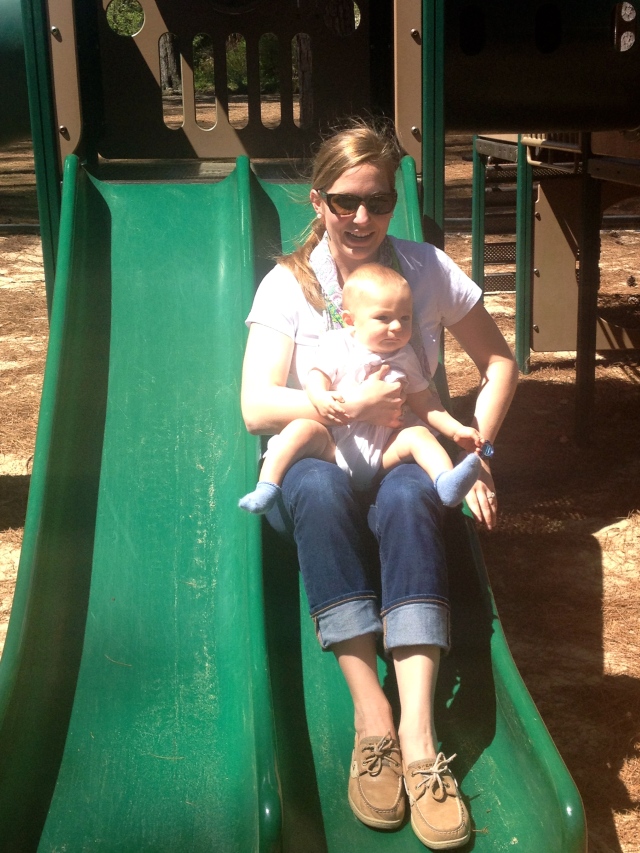 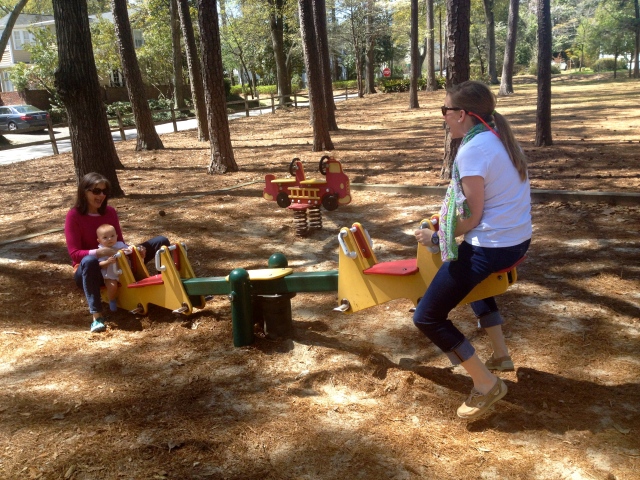 The rest of the trip was just amazing time with family and Colt hitting milestone after milestone. My mom is pretty much Super-Grandma and was AWESOME with Culhane. He absolutely adores her and she is SO great with him. She also really gets all of the developmental stuff and pretty much taught him how to crawl, sit up, pull up and talk all in 12 days time. It kiiiiiiiind of makes me question my own parenting abilities as a mother since I am with Culhane all day every day and then I bring him to my mom for 12 days and suddenly he hits all of these major milestones!! Seriously though – she was amazing. Giving him lots of new, fun foods, constantly playing peek-a-boo, riding him around on her shoulders, and literally teaching him to crawl. She even taught him who “Buster” was – the deer-head in their living room. No matter what you were doing, if you asked Colt, “Where’s Buster?” he would turn and look at the deer! I couldn’t believe it. 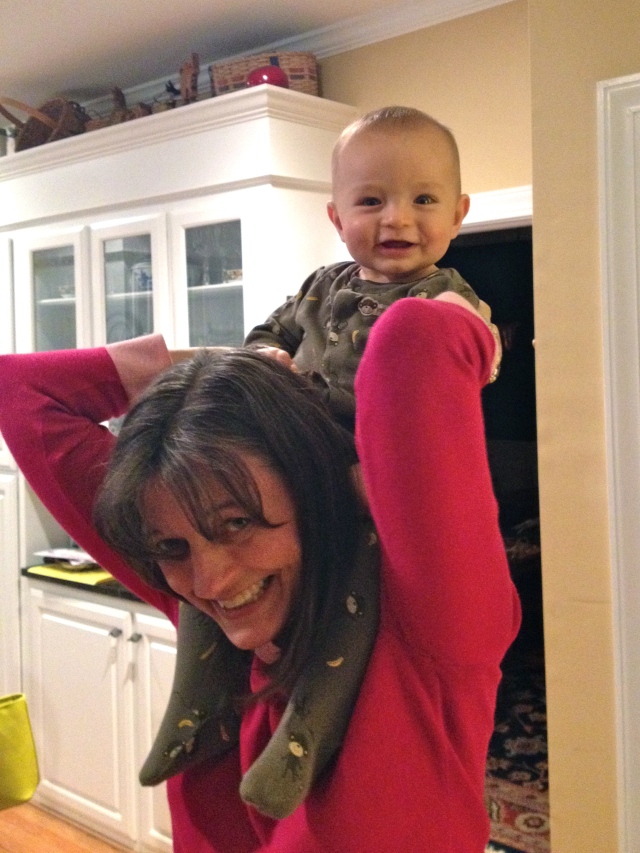 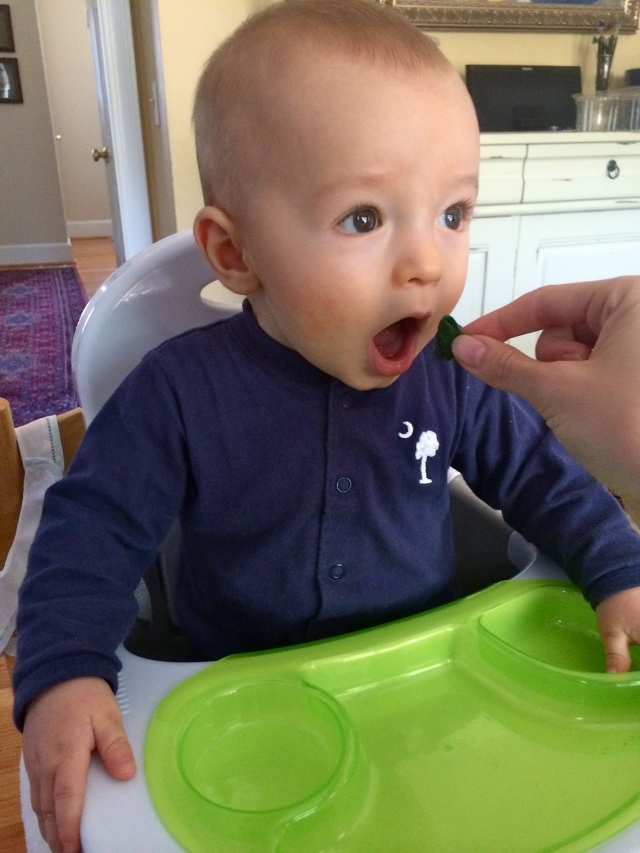 Pasha helping Colt learn to walk around the table.

Of ALL the toys that my parents have, this was his favorite. The number 8. Very Colt-like. 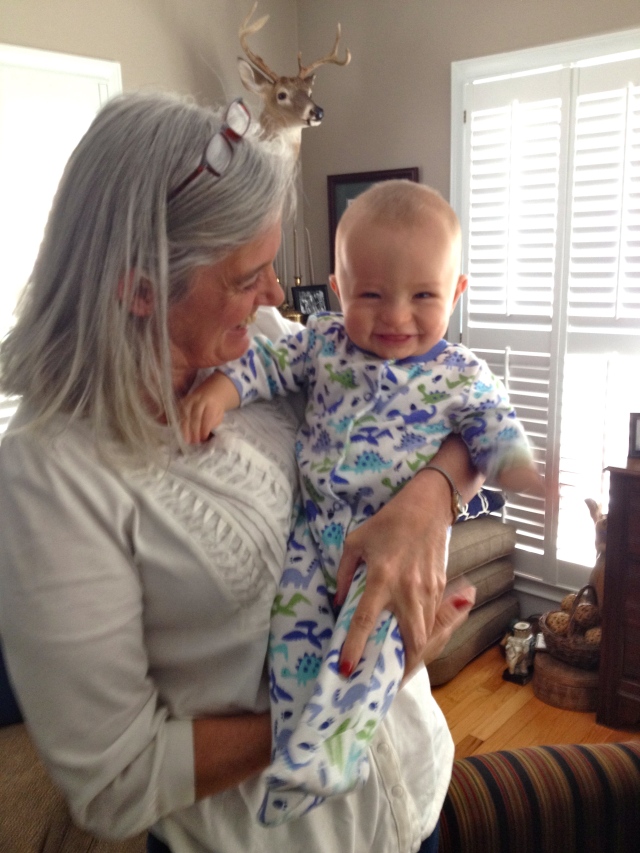 Hi Aunt Sheryl! (And hi Buster in the background!)

Two peas in a pod.

Colt and I were both pretty devastated when we had to get back on a plane and leave SC but we had a wonderful visit full of fantastic memories. Thanks for having us, Mom & Dad! and thanks to everyone who visited with us! We love you!

Thankfully, Colt was even nicer to me on the return trip, only being awake for 1 hour and no tears at all! I’m a lucky mama.

One thought on “Spring in South Carolina”