As you can tell by the title, this post is going to focus on what’s known as “The Big 5” animals: Elephants, Leopards, Buffalo, Rhinos and Lions. Little FYI – although the Big 5 are not necessarily all of the biggest animals, apparently part of what got them into the Big 5 is the fact that they are the hardest animals to hunt on foot. Phinda is known for having them all but you still never know exactly what you’re going to see, but we got lucky saw everything.

ELEPHANTS: Elephants are so freaking big that they were always a little shocking to me every time we saw them. We had many close-encounters with them and randomly there were a few instances where we saw male elephants who were, ahem, spraying fluid out – looking for a mate. Strange but interesting. Here is a look at some of our elephant sitings! 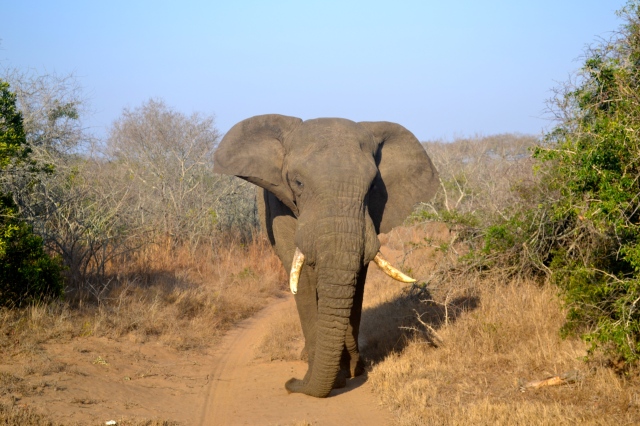 Coming right toward us! 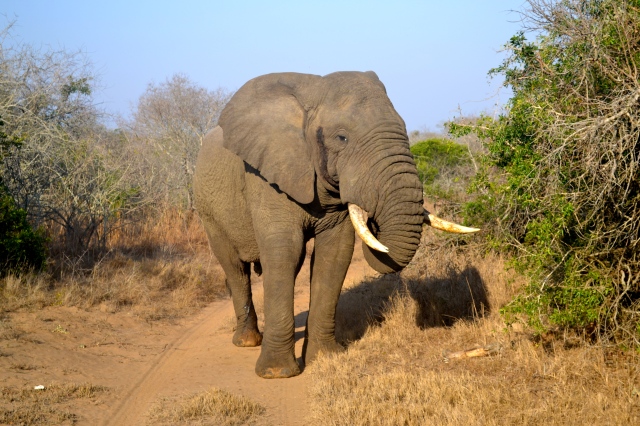 Veering off the road, thankfully! 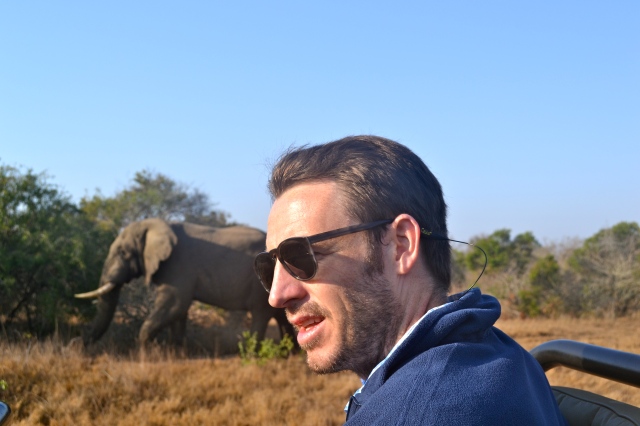 They both went for the profile shot.

Here we started off just seeing one elephant coming through the bush but were thrilled when it turned out to be a whole little herd!

Why did the elephant cross the road? 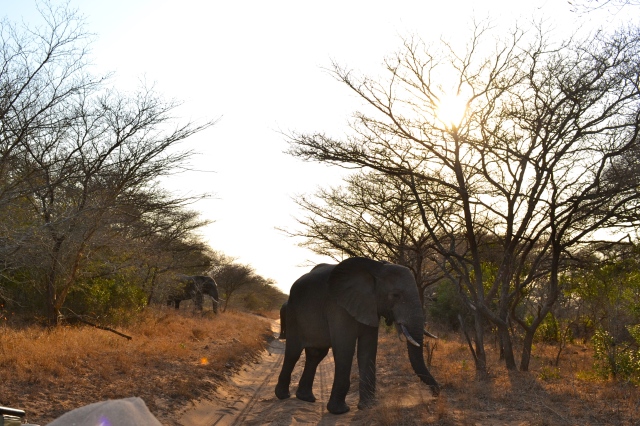 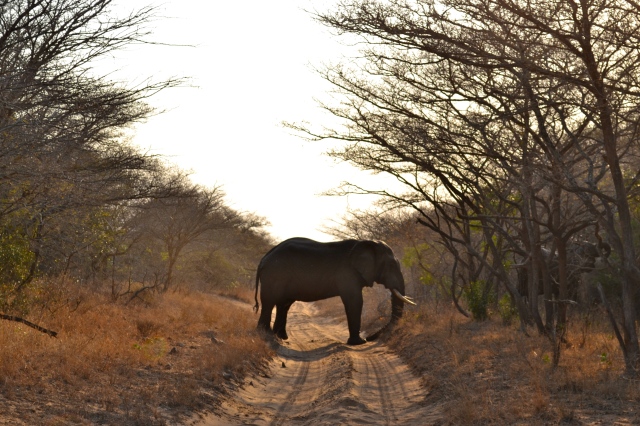 And this one was just such a cool shot. Thank you for posing! 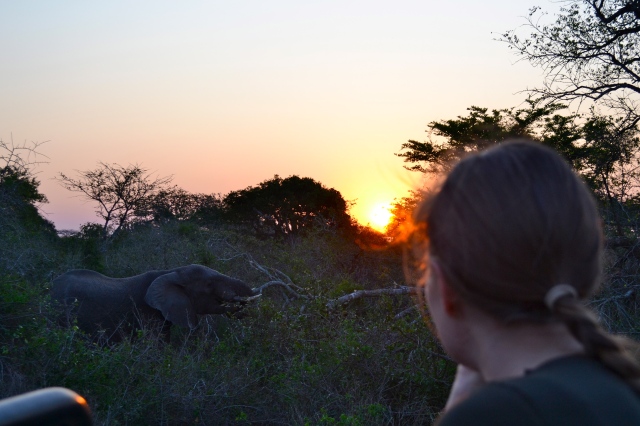 Chompin’ down in the bushes. 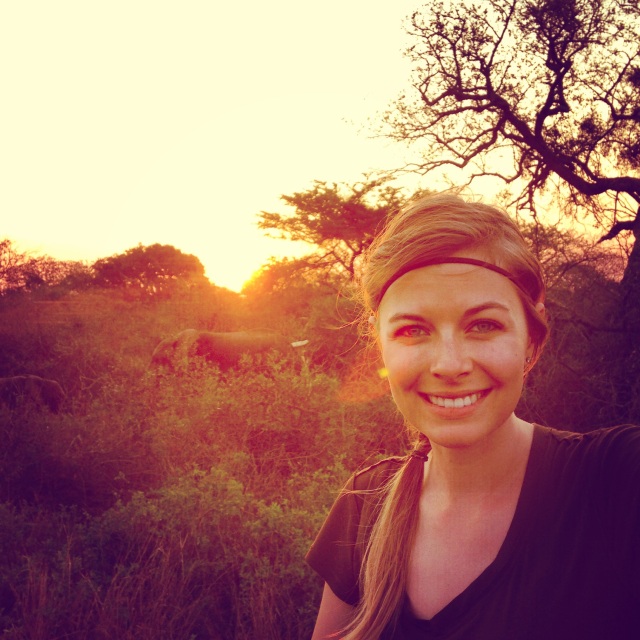 Not a bad way to watch the sun go down!

LEOPARD: The leopard is one of the hardest animals to spot as it is most active during the night when it is very difficult to find and see, however we got super lucky with this one. On one of our evening drives, our ranger had heard that a leopard had been spotted in a certain area so before we went back to the lodge we went “hunting” for it. We stayed out a little later and searched in the pitch-black dark for probably about an hour. I thought that there was no way on earth we would find it, but our ranger was determined, and amazingly, he got it! It was SO beautiful to see in person and the leopard actually walked very close (like, maybe a little too close) to our vehicle so we got a great look at him. It was hard to capture with photos at night but here are a couple. 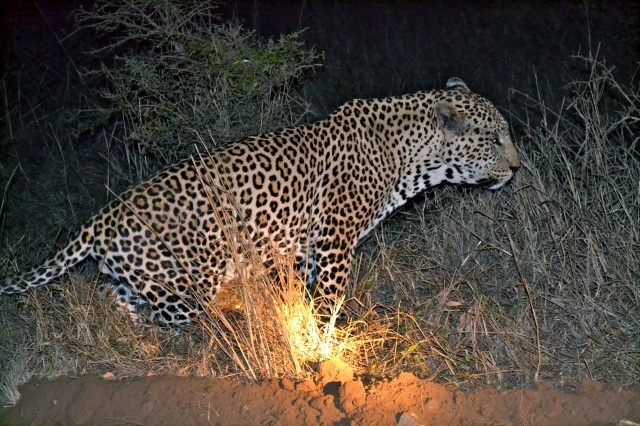 Our tracker shining the light on him.

BUFFALO: The buffalo were the one animal that we generally just saw more or less from a distance, usually in packs out on the plains or at the watering hole. 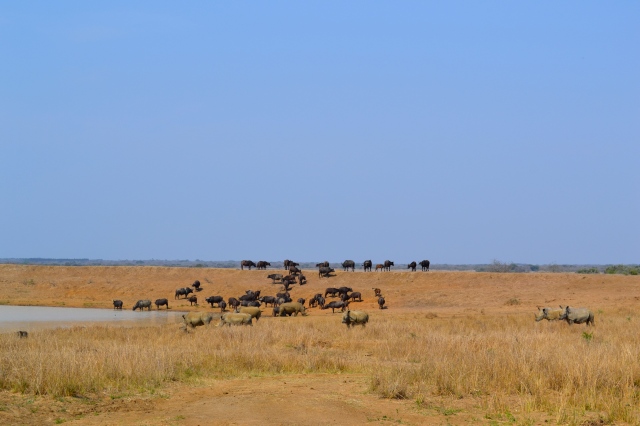 RHINO: There are 2 types of rhinos: white and black. The black rhino is a little smaller and critically endangered and although Phinda does have them and we saw some tracks, we never spotted any of the black rhinos. However, we saw lots of white rhinos! We got really close to them a few times but also saw them out grazing a lot as well.

Even being this big, they still blend in a little!

On one of our morning drives we actually went tracking rhinos on foot, and while we didn’t end up spotting any on the walk (which I was quite OK with – yikes!), we did have an awesome 2 hour hike through the bush.

Sticking close to our ranger and tracker as we tracked rhinos on foot. 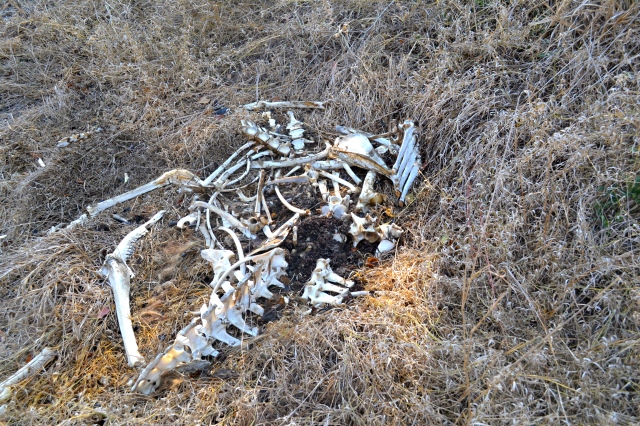 LIONS: I pretty much had the Lion King soundtrack playing in my head for our entire trip, so I was always very excited to see lions. The first time we spotted some, we had spent about 45 minutes following some tracks way off-road and we came upon a lion and lioness just in time to watch them mating!! It was so awesome. Apparently, according to our ranger, that lioness originally had 3 cubs but her baby-daddy took off and then other male lions killed 2 of her cubs. So, in an attempt to save her final baby, she left the cub with another mama lioness and went to seduce a lion into mating with her. She basically pretended she was in heat and mated with this new lion for about 3 days so that he would accept her cub as his own. Crazy, no!? 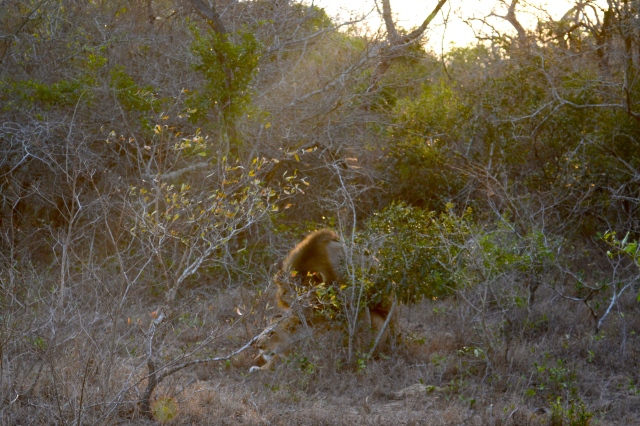 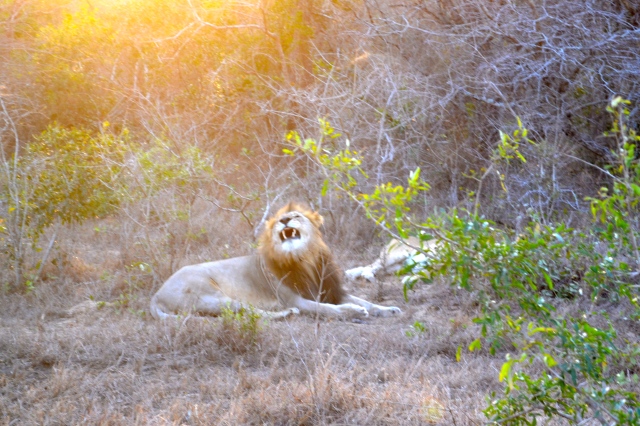 Check out those teeth!

Then, a few days later we found this pair again but she had reunited with her cub and a couple other lionesses had joined the pride! So neat!

How many lions can you spot?

Such big and powerful animals. 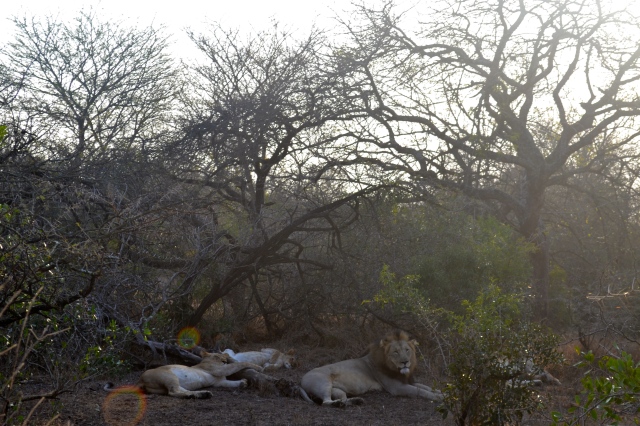 Separately, we found a different lioness who had 3 baby cubs with her. She had recently killed a wildebeest and they were hanging out around and feasting on the carcass. 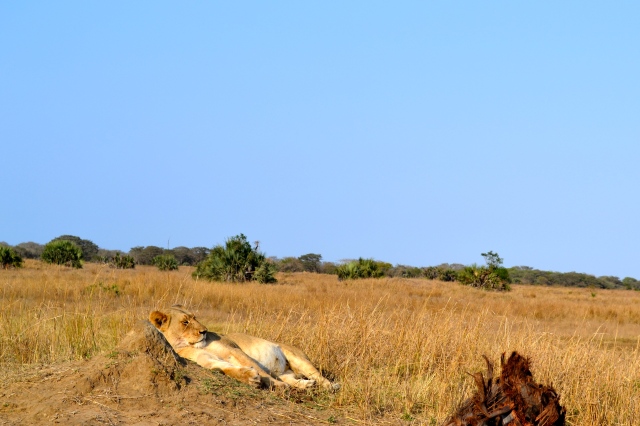 Mama sitting up on the mound. 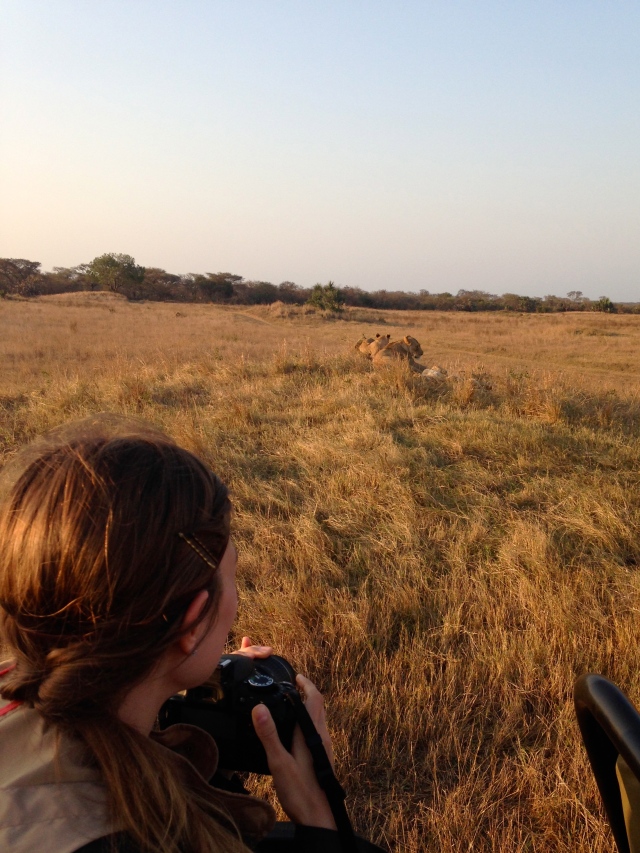 Trying to capture the moment! 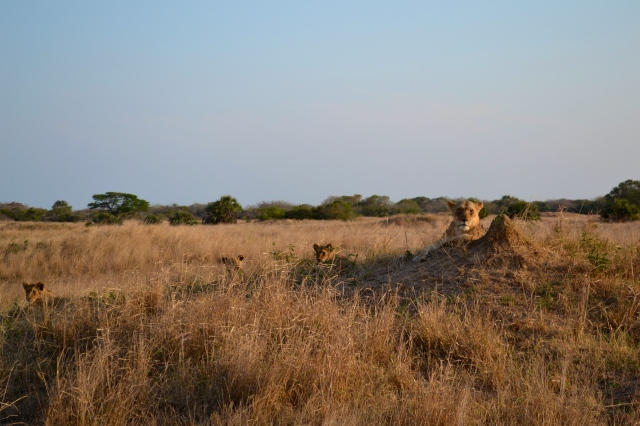 Mom with her 3 cubs. 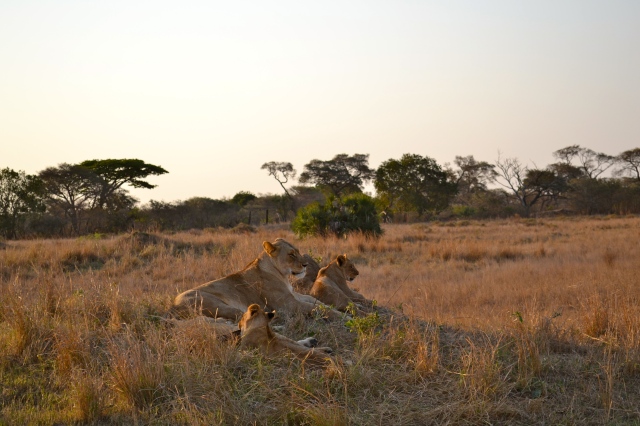 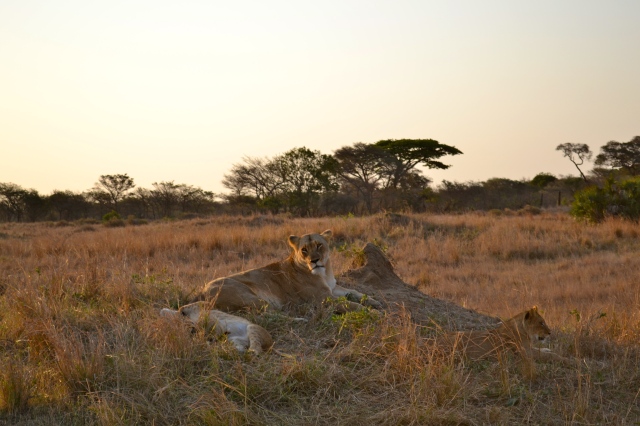 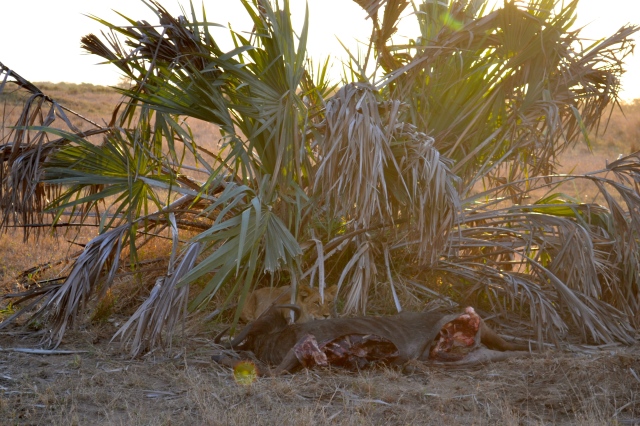 Diving right in! This was so crazy. You could hear the chewing of the tendons – it was kind of graphic…

And here comes another!

Wow – so that sums it up for our Big 5 sitings! Next up we’ll cover what we affectionately call the “Fun 5!”