After a wonderful visit in Arizona, Michael, Colt and I flew to South Carolina to ring in the new year with the Zaises! We had a wonderful welcome dinner with my parents, grandparents and my aunt where we were immediately able to share the news of Baby #2 on the way.

After a couple of days in Columbia, my parents rented a condo on Folly Beach so that we could be closer to my brother’s family for a few days. Brad and Suzanne have a sweet 3 year old, Augusta Clare, and they were due with baby girl #2 on January 20. When we originally scheduled our trip, Colt and I planned to stay in Columbia longer than Michael was able to in hopes of being there when she was born. However, the baby surprised all of us and came 5 weeks early on December 18 – the day we arrived in Phoenix! It was a bit of a shock to everyone but she was healthy and strong and after some time in the NICU, Brad and Suzanne were able to bring her on home. Of course all we cared about was that she was doing OK but secretly Michael and I were quite excited that we would definitely get to meet her and spend time with her.

We all drove to Charleston on New Years day and had a great few days in the area visiting with the Zaises and also enjoying the city. I had a hard time staying awake for, mmmm, any amount of time, so of course passed out on the drive. Normally I would never post this but with Colt snoozing right behind me, for some reason I kind of love it. 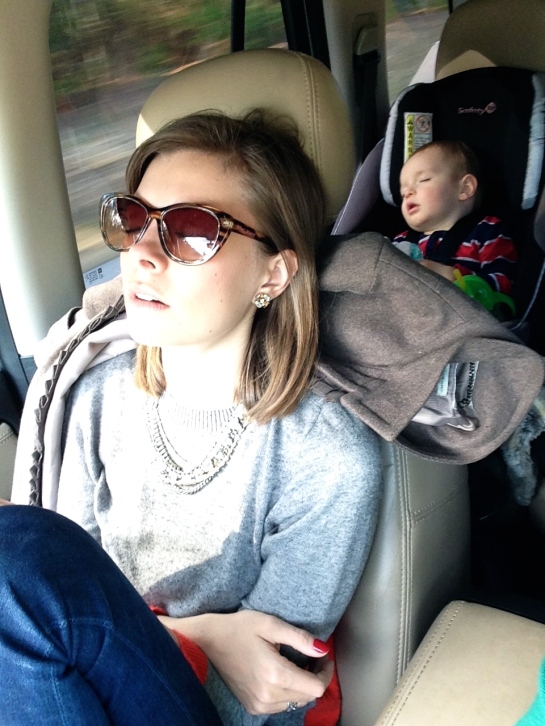 Michael snapped this little gem of Colt and I passed out in the car on the drive to Charleston.

Colt and Augusta Clare were so funny and cute together. He basically followed her around everywhere and tried to copy whatever she was doing and she just bossed him around – much to his delight. It was adorable and made me seriously wish we were closer.

Colt and AC – such fast friends!!

Brad and sweet tiny May!

One afternoon we got my parents to babysit Colt for us while Michael and I went out in downtown Charleston. It’s a beautiful city and always fun, but was especially special to us as it was the first time we had really been back downtown since our wedding! Of course we stopped in at the Charleston Place Hotel and Michael got an Old Fashioned at the Thoroughbred Bar.

That evening we enjoyed more time with the Zaises and got a few good family photos.

Augusta Clare absolutely adored Michael and he adored her right back!

Back in Columbia Colt continued to enjoy time with my parents and we continued to take advantage of their babysitting!

Playing with one of our old toys. 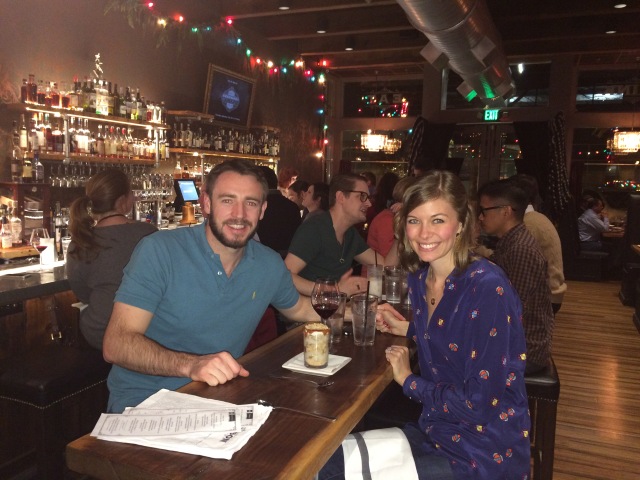 Date night out together.

Michael had to head back to Brazil early January (after all, someone has to be working around here!) but Colt and I stayed through the end of the month (until January 24). Although we missed Michael, this was truly SUCH a blessing as my first trimester exhaustion and sickness really kicked off around the time we landed in South Carolina. Therefore, while Michael was back in Brazil getting to focus on work, I was able to focus on rest and taking care of myself while my mom focused on taking care of Colt! It was really a win-win-win as Colt is literally obsessed with Gigi, my mom loved it and I could not have been more thankful for the luxury of being able to take naps and have someone cook for you every day. The life…

We also did lots of other fun things throughout our visit. One very special event was on January 10 when my grandparents celebrated their 60 year anniversary (just days after my parents celebrated their 35th!). Amazing, right?! It was a cold day so we first met them at the mall and played with Colt on the carousel and then headed out to dinner. It was such a beautiful cause for celebration and I am so thankful for the incredible testimony of their marriage and the example they have set for me. 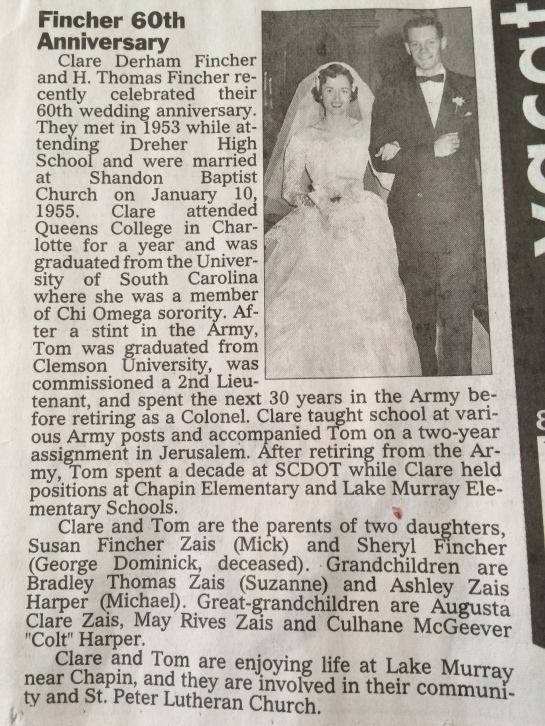 Announcement in the paper with their wedding picture from 60 years ago!

Colt at the mall with Papa, Nannie, and Aunt Sheryl.

Gigi and Colt on the carousel.

Colt living it up on the Fun Bus.

That weekend, we were also super blessed by a visit from my dear friend Meredith! She drove from Chapel Hill to spend the night with us and it was so fun and refreshing to have time with her. Thank you so much for taking the time and making the trip to see us Mere! (Excited that next time we see each other it will be here in São Paulo THIS MONTH!) 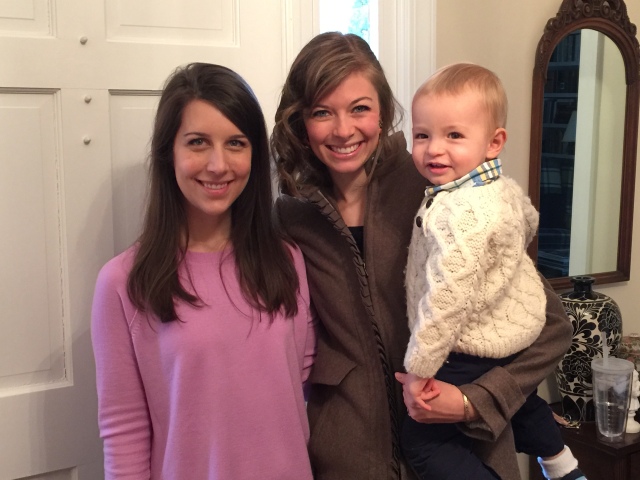 My mom and I made another trip to visit Brad, Suzanne and their girls and again, loved it. 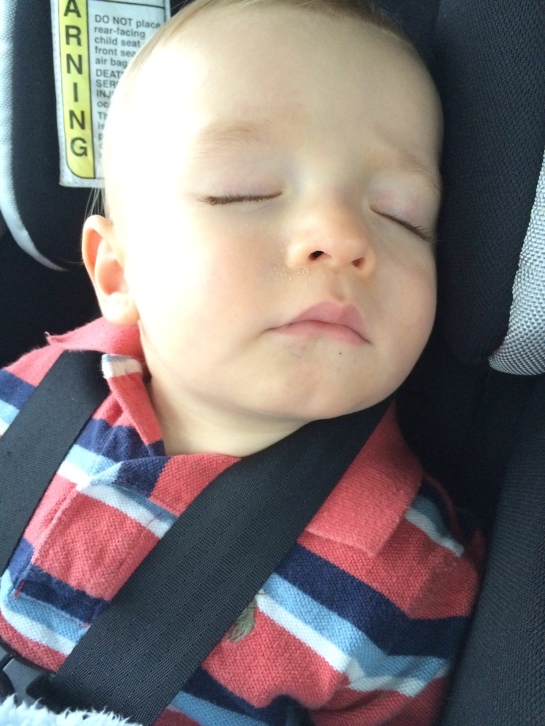 Sleeping babies are the cutest babies. 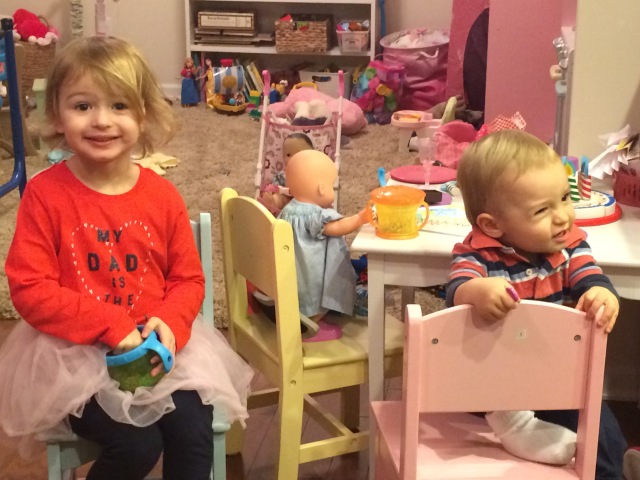 Sitting on the stairs just being cute together.

Michael and I got Augusta Clare a doll house for Christmas and Brad and Suzanne were great sports about it, even putting in the 3 hours of labor it took to put it together, but I’m pretty sure they kind of secretly hate us for giving them something so massive. Augusta Clare seems to like it though!

Augusta Clare and her doll house!

Fun in the tub. 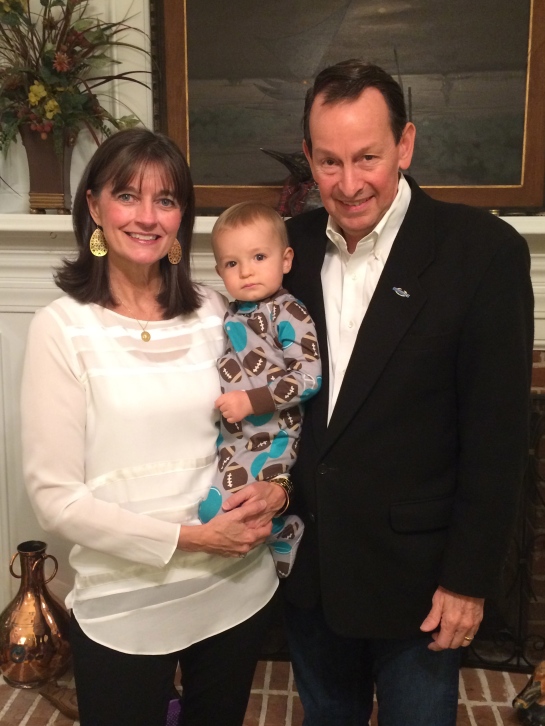 Poor Colt was not happy when Gigi and Pasha went out and he was stuck with just me.

His favorite book, “Augusta Clare goes to the zoo with her great grandparents.”

Big bubble bath. Much more fun than the kitchen-sink baths we do at home. 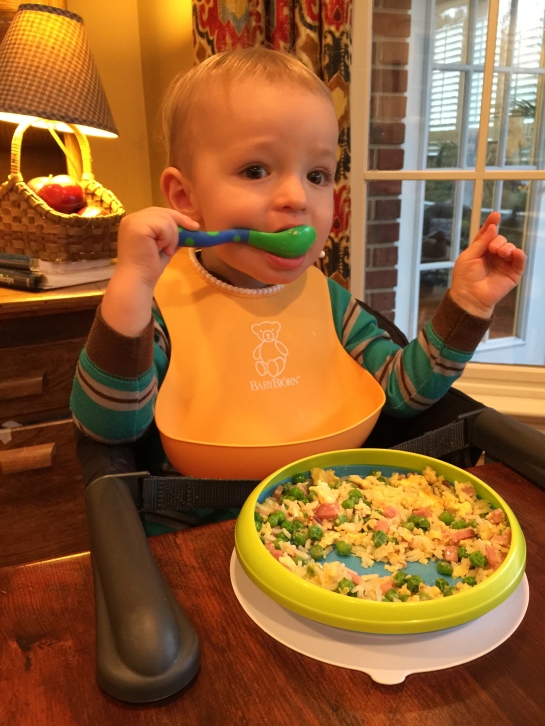 Colt loved Gigi’s fried rice. Thankfully this is one I can make too.

Flipping through pictures with Nannie and Papa. 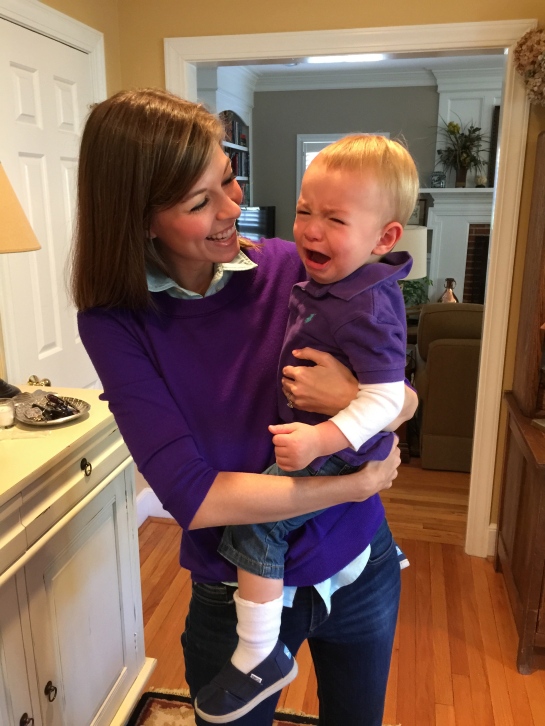 Colt was NOT excited to be dressed the same as his mom.

Outing at the children’s’ museum in Columbia. Colt loved shopping for groceries. 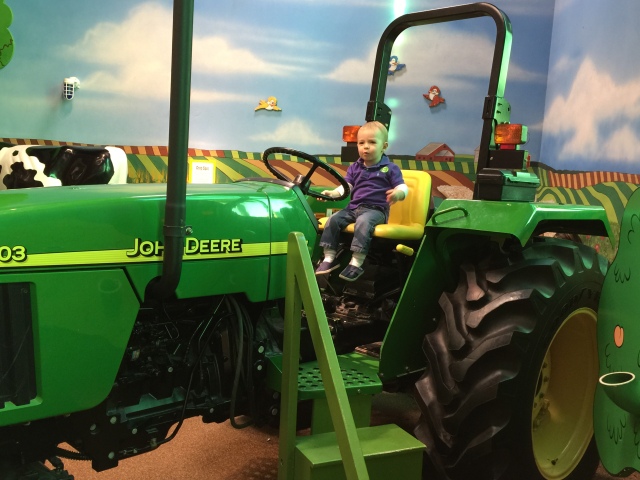 Blowing bubbles in the yard with Gigi.

Very excited about the beautiful new sweater that Aunt Sheryl knit him.

A little blurry but still sweet. Colt snuggling with his big cousin Margaret!! 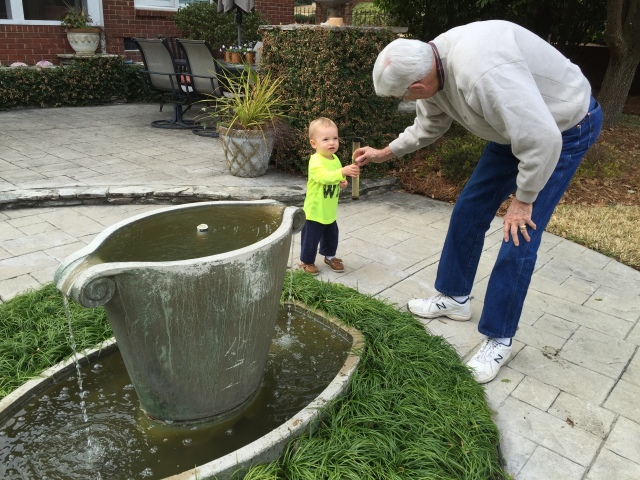 Running around the yard with Papa.

While we were in Columbia we also took a couple trips to the zoo but I’m going to post about that separately as this has already gotten so long!

One thought on “January in South Carolina!”