Jumping right back in on my friends’ visit to Brazil… On Thursday afternoon we headed to the airport to fly to Rio. The flight is only about 45 minutes and Colt had fun hanging out with “Emmie” and looking out the window at the beautiful views as we flew into Rio.

View from the plane.

We rented a cool apartment in Ipanema through Air B&B and got ourselves settled in before dinner out Thursday night to Bar Astor on the water. 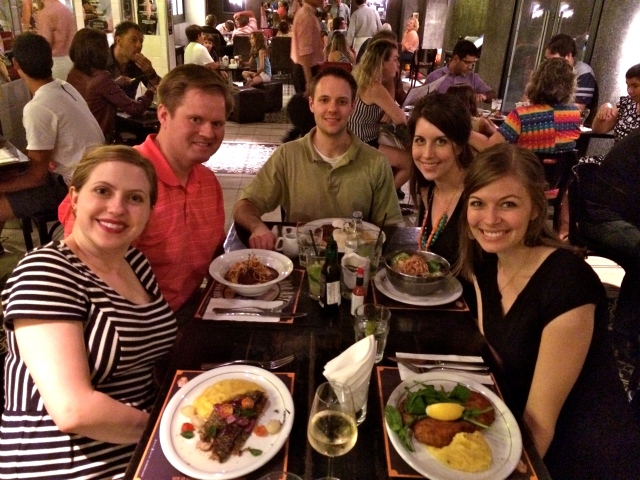 Bar Astor while Michael babysat back at the apartment.

On Friday morning while I hung out with Colt, Michael led the group on an awesome hike up the Dois Irmãos mountains. I had actually already done the hike once before with Michael’s family but he had been working at the time so he hadn’t been able to join, so he was happy for an excuse to go. In order to get to the starting point of the hike you have to first go through a local favela which is an experience in itself.

I would say the hike is moderately easy (but definitely not a cake walk) and takes 45 minutes to an hour and is a Rio must-do. It’s beautiful all the way up with monkeys, wild orchids and gorgeous views, but the view from the top is of course the best. 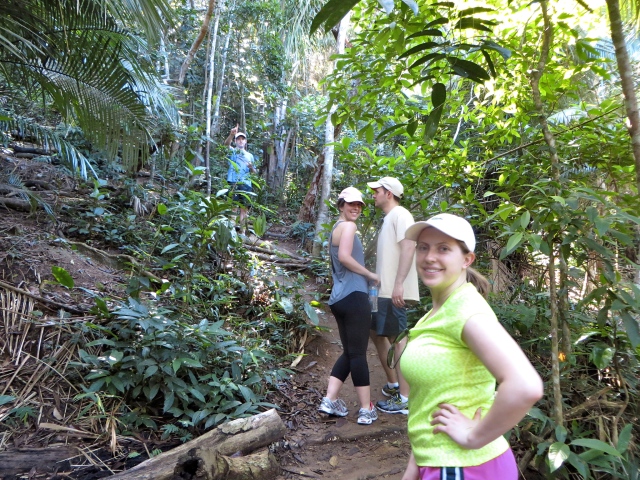 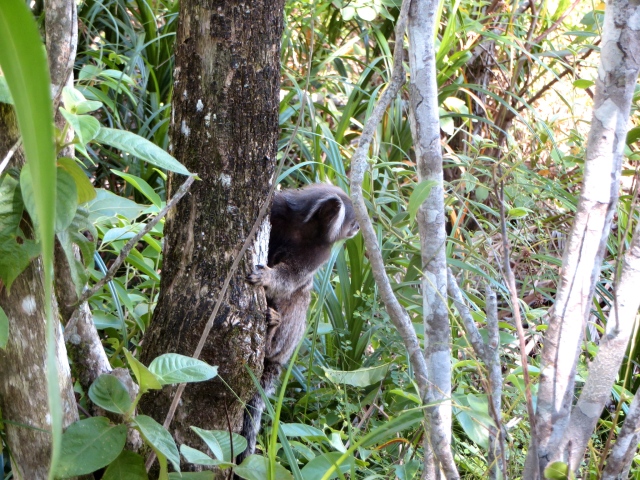 Little monkey poking his head out.

View of the favela below.

Views to the right.

Group shot at the top! 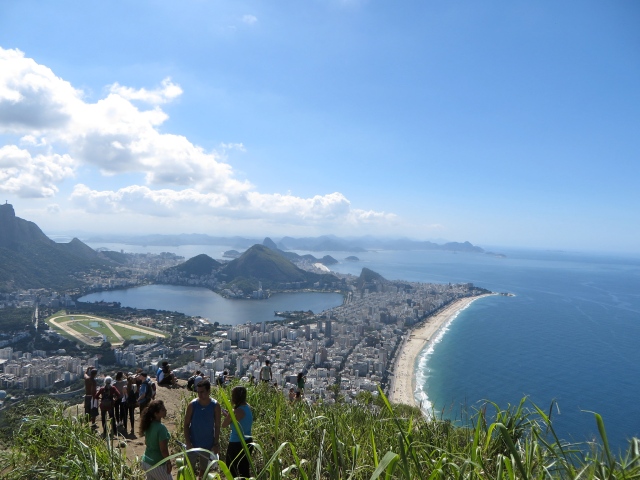 Friday afternoon we went to the beach where we relaxed for hours. It was pretty crowded but fun and perfect for people watching. And bonus – our sweet friends, the Cannons, who live in Rio came out to play on the beach as well! 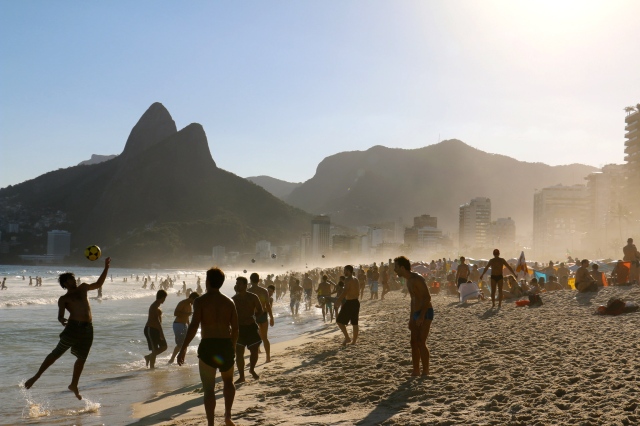 I love this shot because you can literally count 8 soccer balls in the air as you look down the beach. That is the beach in Brazil.

Friday night the Cannons let us put Colt down at their apartment for a few hours while we went to dinner at our favorite Rio sushi spot, Sushi Leblon. 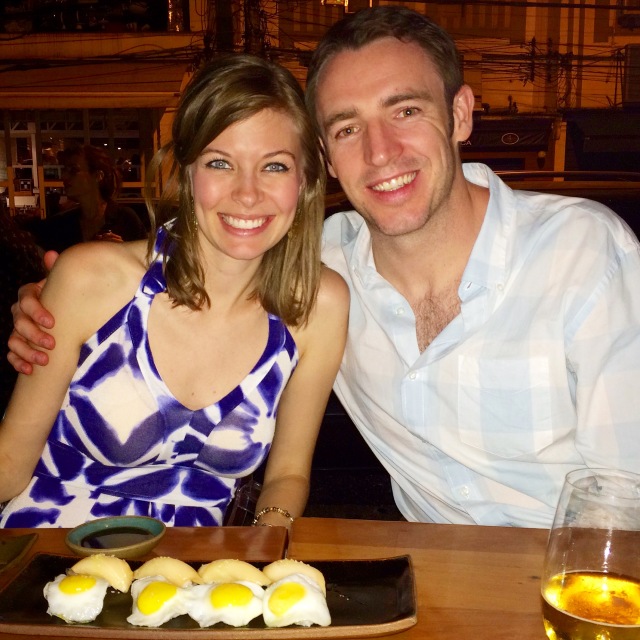 My favorite plate of the night.

Saturday morning the sky was totally clear which is perfect (and unusual!) for visiting the Christ statue. I was on babysitting duty with Colt but Michael led the crew to the top and they had awesome views of the statue and the city.

Views from the top!

Meanwhile, this is what Colt and I were up to back at the apartment…

That afternoon was another perfect day at the beach. 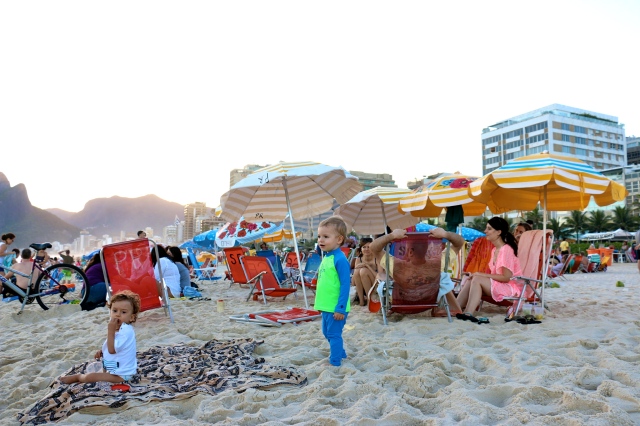 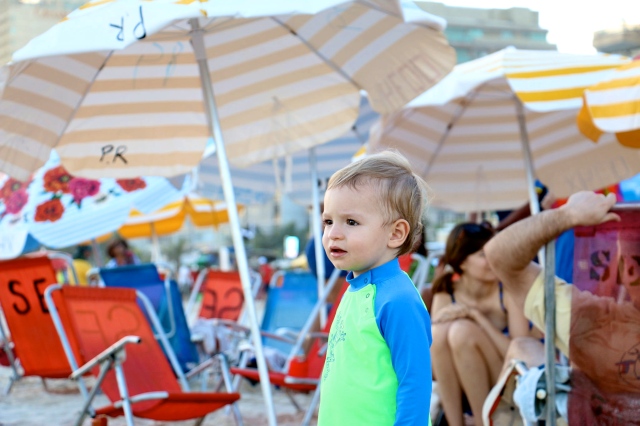 In front of the Dois Irmão Mountains that the crew hiked up!

Saturday night we hired Paula’s babysitter to stay with Colt so that we could go out for dinner at Zaza Bistro then fun and dancing at Rio Scenarium! 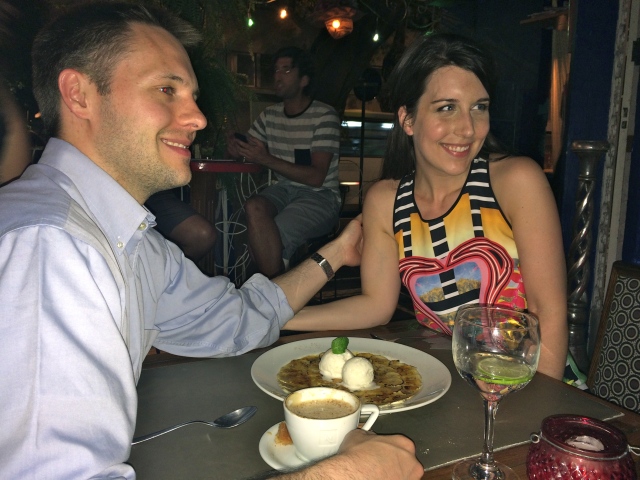 When we showed up to Rio Scenarium, the line to get in was around the block – as far as you could see. We tried to use my pregnancy to get us in ahead of everyone but the woman said that while Michael and I could go in as “priority,” I couldn’t bring the whole crew in with me so, to the back of the line we went. Thankfully, however, the line moved quickly and it felt like it moved even faster due to the plethora of music, drinks and fun happening. And once inside we all agreed it was worth the wait. It’s hard to describe Rio Scenarium but basically it’s a 3 story club with a great samba band that plays on the bottom floor, food and drinks served throughout and fun, different, totally random decor in each room.

Part of the line, stretching around the block. 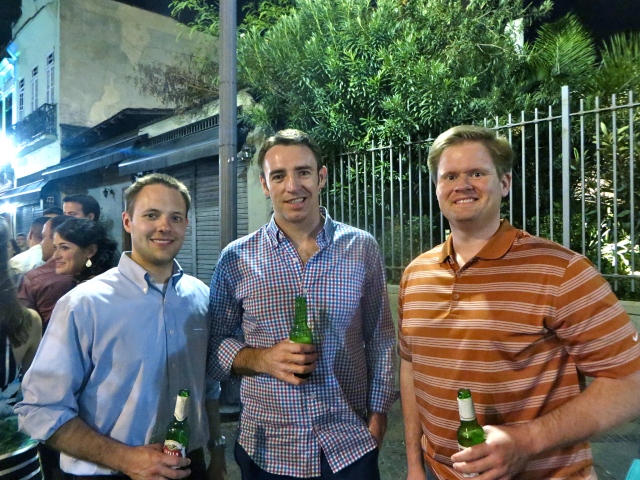 Staying hydrated while we waited. 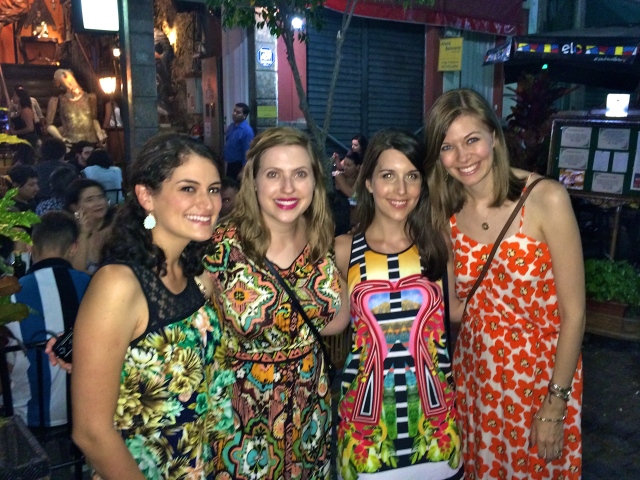 View down to the band from the 3rd floor.

Part of the random decor.

The next day was Easter Sunday! We started with a fun brunch down the street from our apartment and then went to mass at a nearby cathedral. 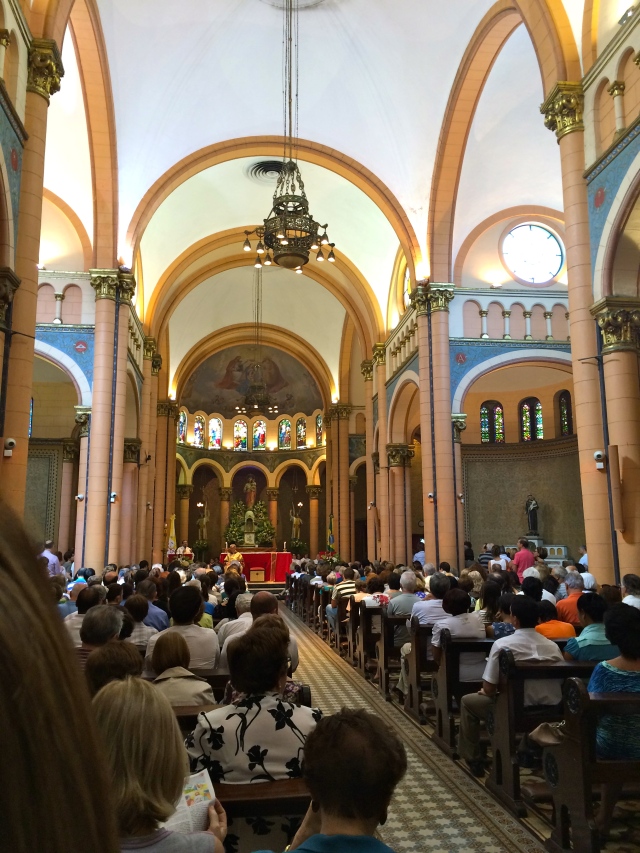 After mass we headed to the hippie art fair that happens every Sunday afternoon in Rio. 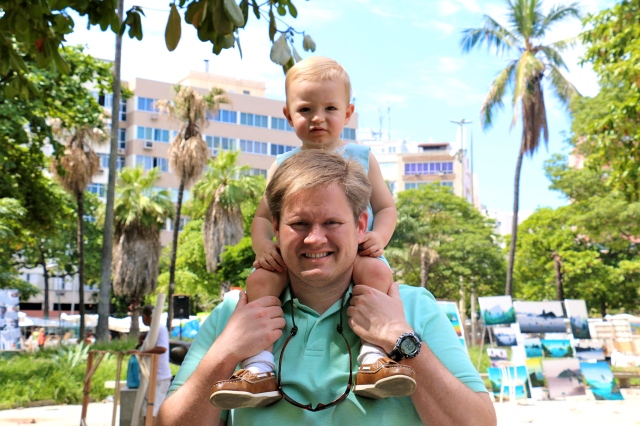 Michael and I have bought art here in the past so we were hoping that our friends would find something they liked too. Meredith and Andrew bought a couple of small paintings and Kern and Emily went big on this awesome painting of Rio.

Photo with the artist!

That afternoon we all hit up the beach for some final hours of sunshine before everyone parted ways to the airport to journey home again. It was such an honor to me that my friends wanted to take such a big trip to come visit me and see my life here in Brazil and I hope that it was everything they hoped!