On December 23, our family headed to the airport to spend the holidays with our Arizona family.

It started off great: Michael dropped me off with the kids and the luggage as he went to park the car. After running around a little, Colt decided he URGENTLY NEEDED to go potty. We had SO much stuff and were nowhere near a bathroom. Also, just at that moment Finn tripped over his feet and face-planted into the floor, only to come up screaming. I really had no choice but to strap Finn into the stroller and slip Colt into a pull-up. I didn’t even fully take his pants or undies off, I just attached the pull-up on via the side openings and had him stand and just go pee in the pull-up! I felt terrible to do that to him, especially in a crowded airport! but desperate times call for desperate measures. Soon Michael came and rescued us. 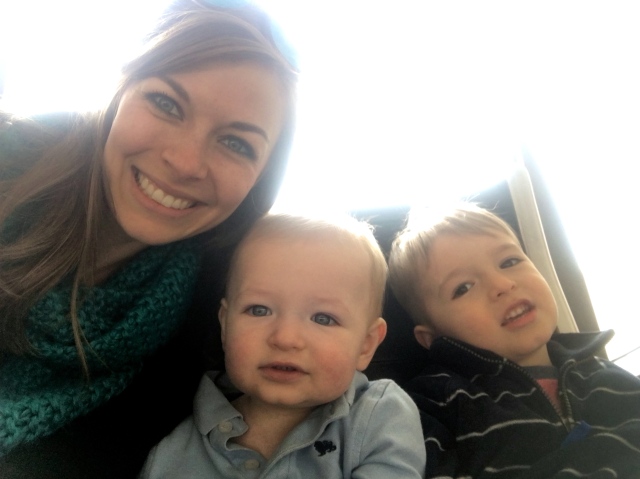 We made it through security and the TSA team handed the boys their very own stickers!

We didn’t buy a seat for Finn on the plane so the flight was…not great.

Michael described it as trying to capture Finn’s attention and keep him happy for a series of 5 second intervals that went on for 5 hours. And anytime that we came up short and failed to keep him occupied/satisfied, he just screamed. 🙂  But, eventually we made it and we were all so happy to be there!

As a Christmas surprise, the Harpers had gotten their home totally ready for the kids. They had just put up a swing-set/playground in their back yard and they turned their garage into a big play space, complete with a train set and drums!
(Uncle TJ taking Finn down the slide!) 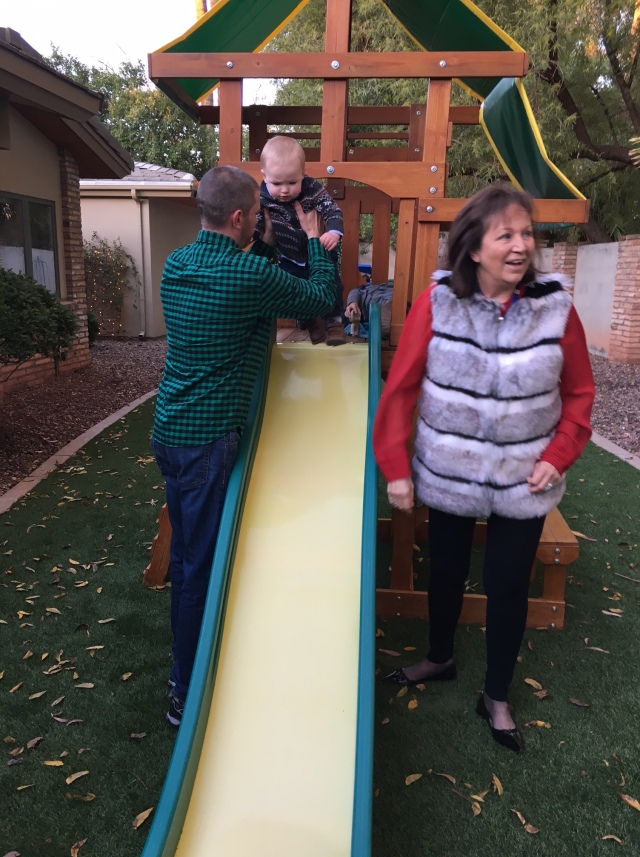 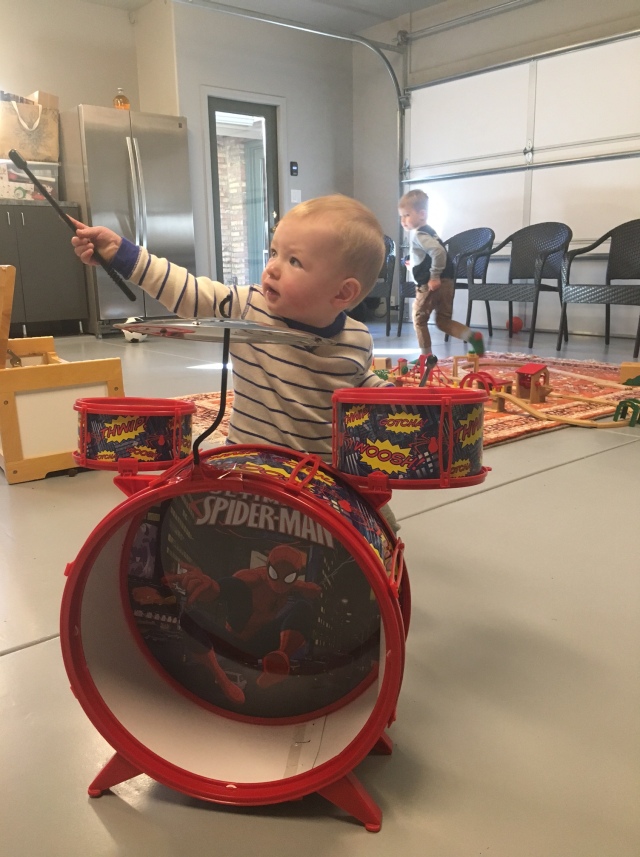 On Christmas Eve, we participated in the long running tradition of dinner and festivities with the Griego family. Bob and Lenni hosted an amazing evening complete with a visit from the Big Man himself!

When Santa walked in, Colt was SO excited. Colt ran directly to him and led him into the room and promptly sat on his lap. Colt told Santa that we had left some cookies and milk out for him back at the house and reminded him that we were in fact in Arizona, not Virginia.

Finn required a little more time to get comfortable but eventually he got there. 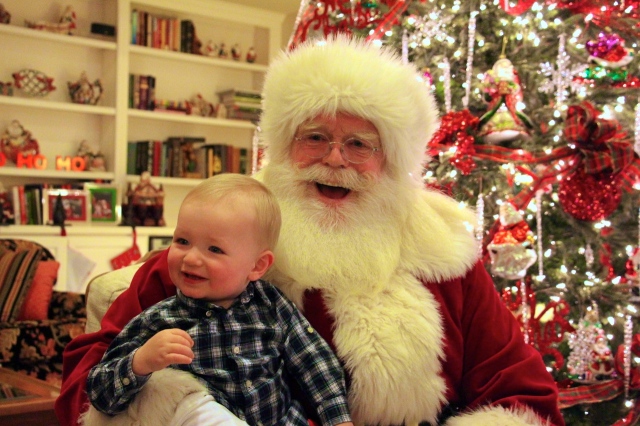 There was stiff competition for best-dressed between Dr. Bob and Dr. Ollie but Santa cast the deciding vote in favor of Papa Harper!

Christmas day was very fun and special. We started off by running to the living room with Colt to see if Santa had in fact eaten the cookies and drank the milk and he was thrilled to see that it was almost all cleared! Santa is “starting small” with our family but he did leave a few little surprises for the boys. One of which was a set of capes and masks which was instant fun for Colt and Finn. 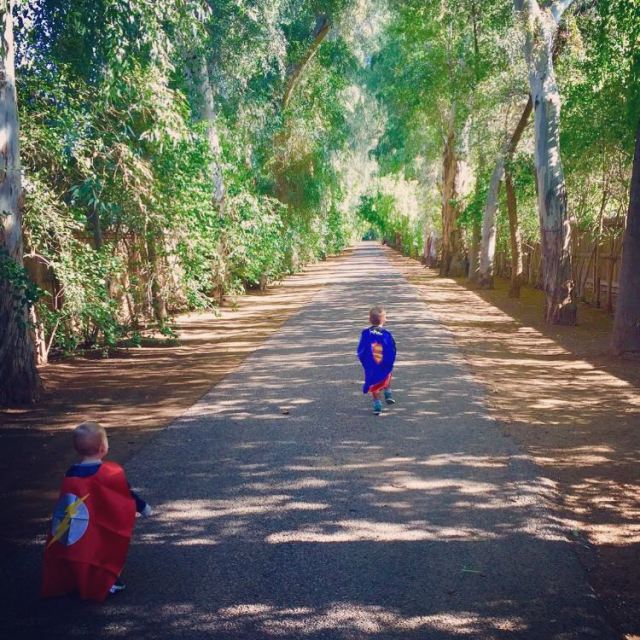 Next we headed to mass with the family at Brophy Chapel. 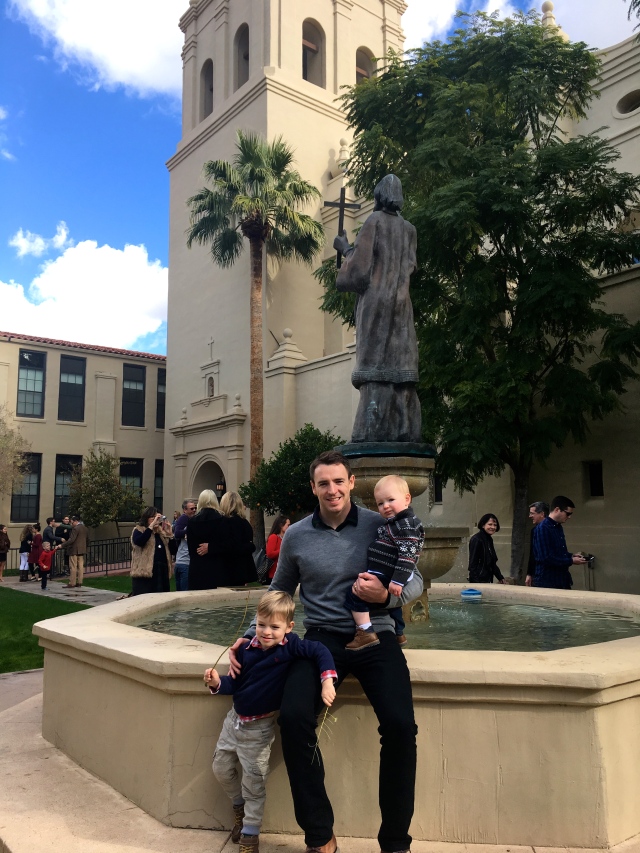 After mass, we spent the afternoon opening gifts and playing together. Both Colt and Finn received personalized sleeping bags from their grandparents and they just loved them!

After the little boys were asleep, the big boys headed out together! 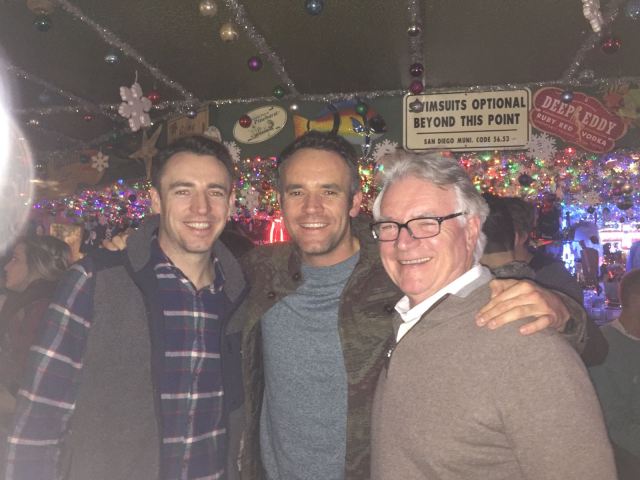 The day after Christmas, we gathered in the Harper orange grove for some casual family photos taken by dear Lenni Greigo. 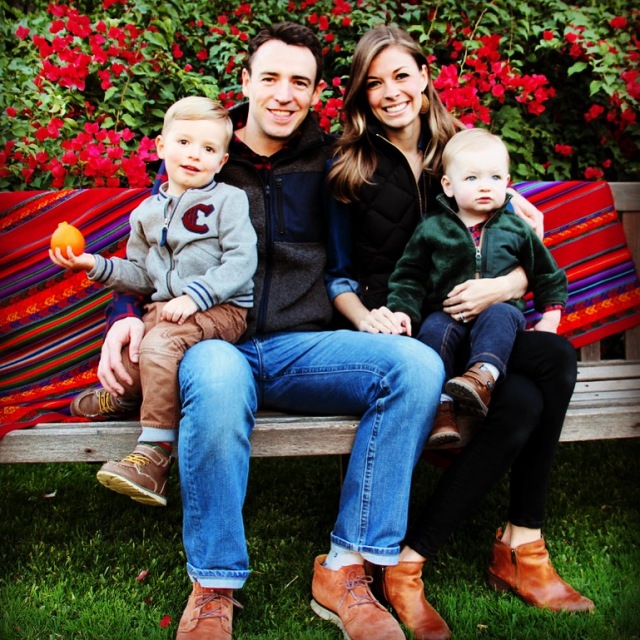 After Christmas, Michael headed back to VA for work while I remained in Arizona with the boys a bit longer. One highlight during my time there was that one of my precious girlfriends from my time in Brazil, Paula, came to visit. Paula’s family ended up in Phoenix after Brazil and (although they’re moving now!) we always enjoyed connecting with them when we were in town. Paula’s two boys are just a few months younger than mine so we had a great time catching up on life and watching our boys play together. The big boys – Colt and Gabe – were instant buds! So thankful for those special friendships formed abroad as we now have treasured friends all over the country / world. 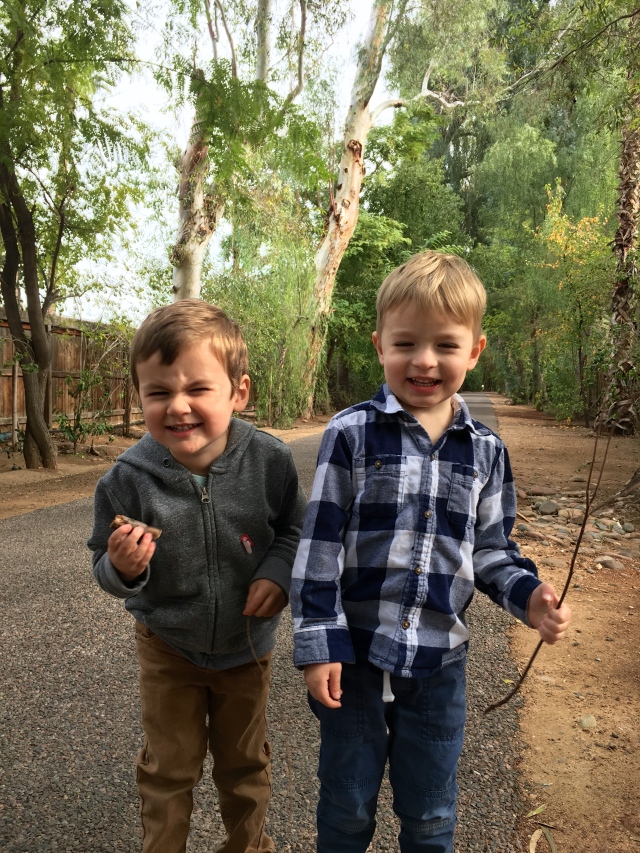 Another fun activity was Lise being brave enough to invite Colt to participate with her in a little cooking extravaganza. Although we may have gone a little too heavy on the powdered sugar 😉  it was so much fun to watch Colt cooking with Aunt Lise. He adores her to pieces and had a blast – especially taste testing along the way. 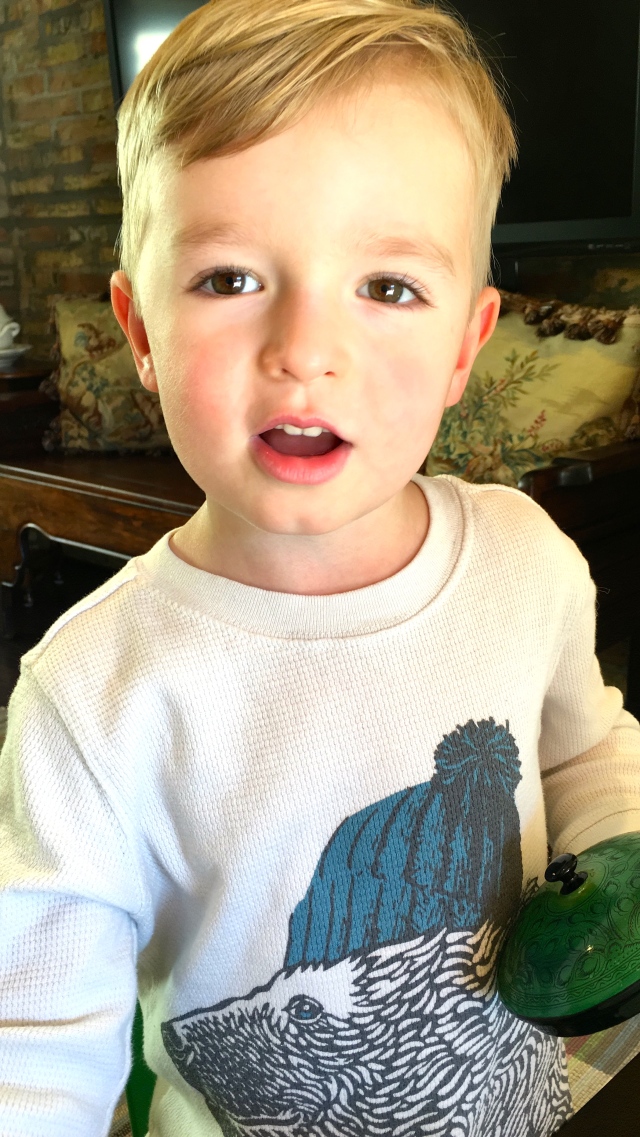 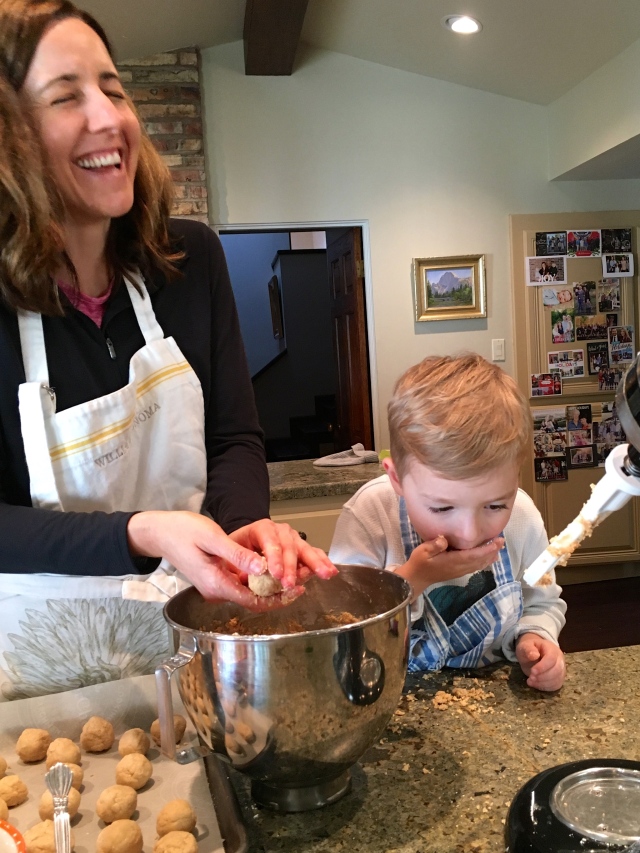 Papa Harper also took the boys to the local firestation and on another adventure to the zoo! 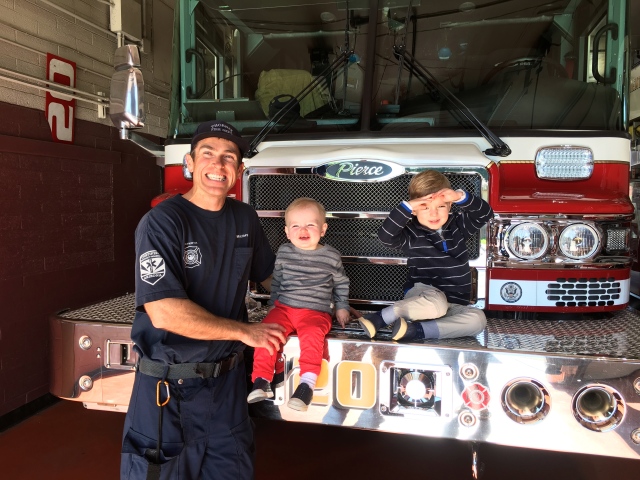 And nothing beats just hanging out with family. Especially loved our many play-dates with cousin Julian, just 3 months younger than Colt.

And I always love my boys in matching PJams!

The saddest event of the holidays happened in between Christmas and New Years. Sweet Sharon had a little fall in the house which resulted in a seriously fractured shoulder. She was such a great sport and super tough through it but it was heartbreaking to see her going through that. Even still, the boys got lots of quality time with her. I just love this magical shot of Colt snuggled up with his Nana, telling stories by the light of the Christmas tree. 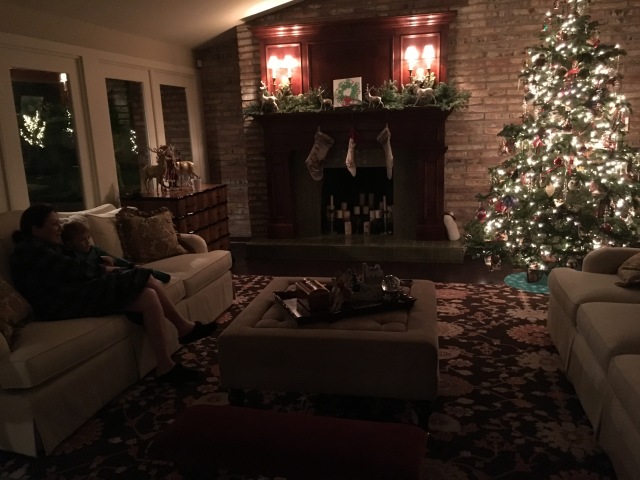 After a week of work, Michael returned to Arizona to celebrate New Years with us. We hadn’t really made and NYE plans, but then Lise’s awesome boyfriend (also named Michael) hooked us up with some tickets to the Clemson vs. Ohio St. playoff game! We were SO PUMPED and had an awesome time – especially given the Big W for the Tigers!!! 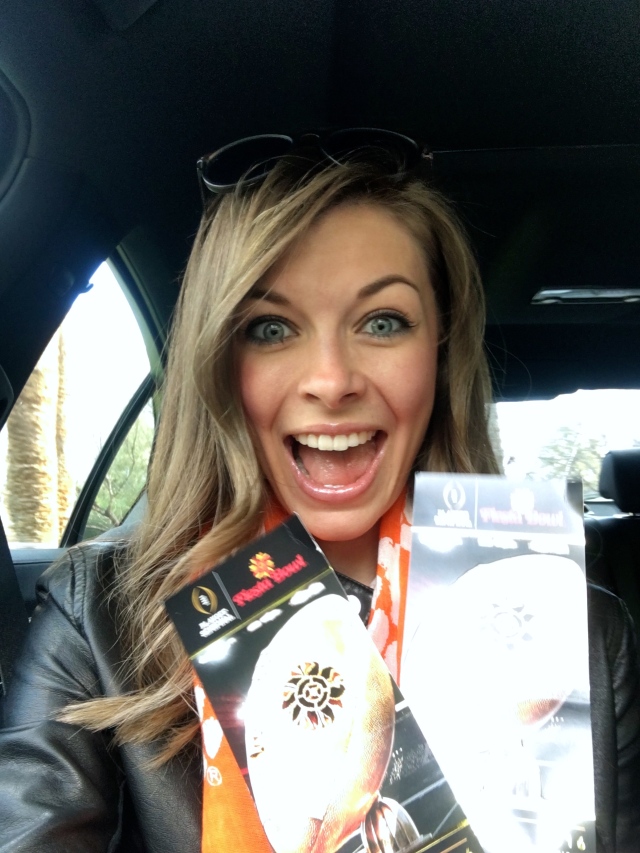 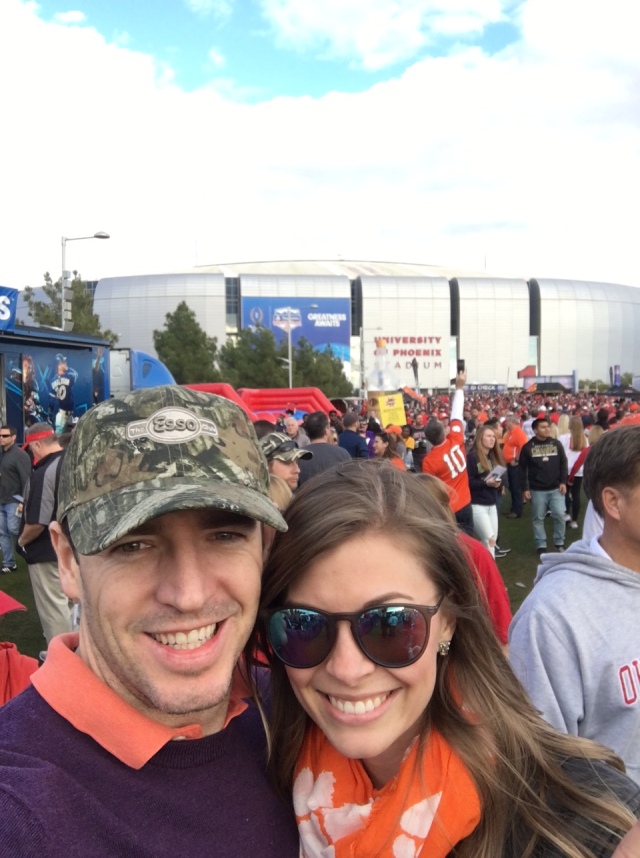 More fun in the new year: 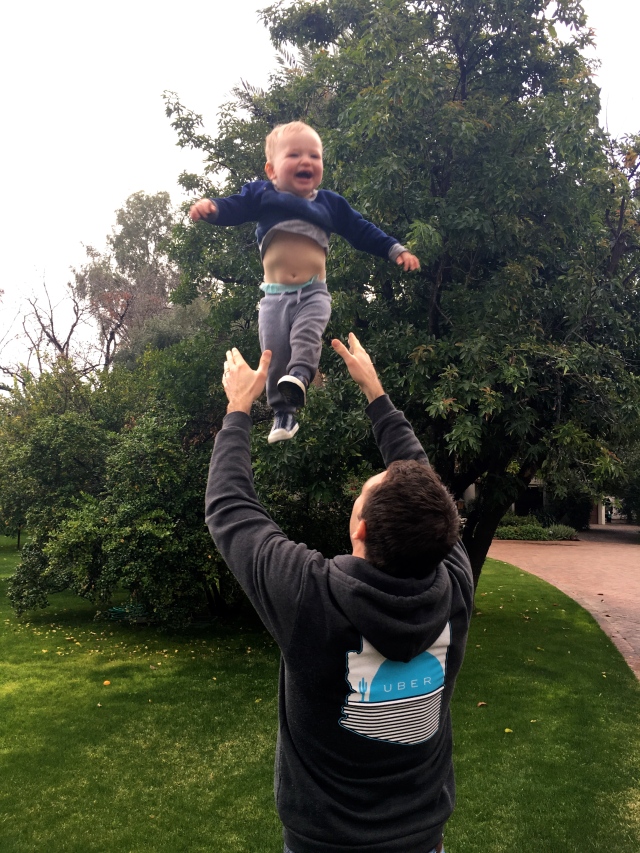 And on the flight home… Colt is an angel and Finn is a NUT! 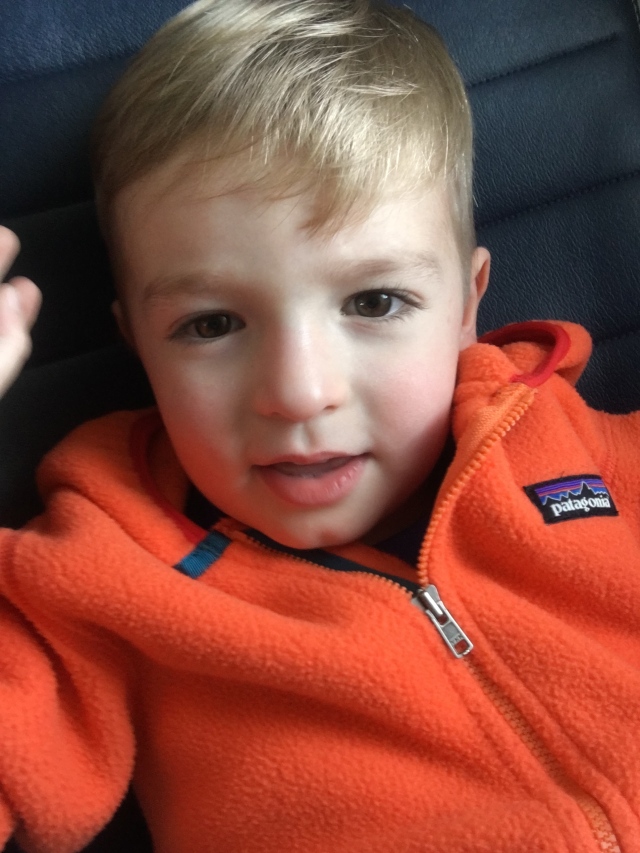 Thank you, Harpers, for hosting an amazing visit!

One thought on “Christmas Season 2016 in Arizona!”