After the wedding in PA, Colt and I flew with my parents to South Carolina. Michael had some work to do in Brazil before coming to visit but then he came for a few days before taking off again for work in DC.

South Carolina was H-O-T so a lot of our time was spent playing in water — blow-up pool in the yard, playing with the hose, swimming at our cousins’ pool and my grandparents’ house at the lake, playing in the sprinklers at the park and even playing in the rain!

Just to give you an idea… 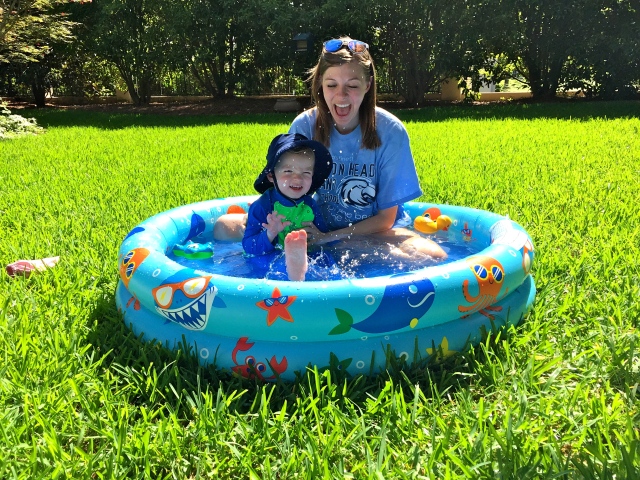 Swimming pool in the yard!

The morning that Michael arrived in SC, we took Colt to get his first hair cut! He didn’t have a ton to take off but since he was almost 2 and it had never been cut, it was a little messy and long in some parts.

The salon, “Hair Doodles,” is for kids so they had plenty of toys and more importantly, a giant tub of animal crackers, so Colt was happy to sit still during the cut.

That afternoon, some innocent playing in the backyard…

It always starts so innocently.

Soon turned into this! 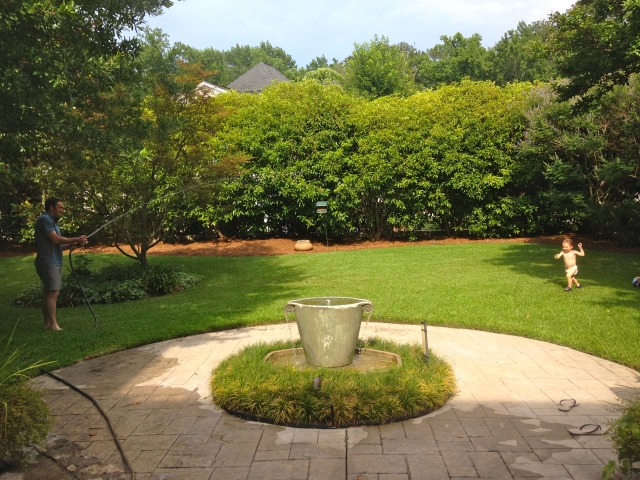 Hose in the backyard.

Colt is loving it.

Drinking from the hose.

One fun thing about visiting my parents is that Colt always gets to play with my brothers’ and my old toys. Here is a cute shot of him playing with my dad on my brother’s old “computer.” 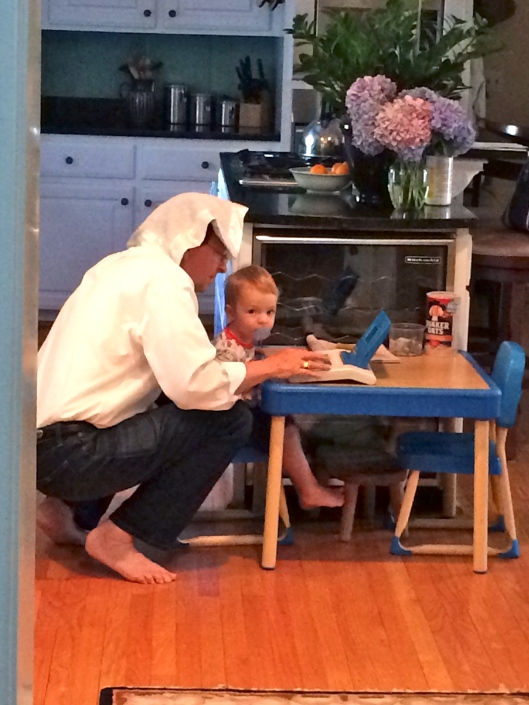 Pasha wearing Blankie on his head while playing with Colt.

Another fun thing – my parents live super close to lots of fun parks including one that my mom went to when she was a little girl! During the hot summer months they turn on an awesome sprinkler system that kids love to play in.

Running through the sprinkler with Dad.

Colt giving Michael a tour of the equipment. 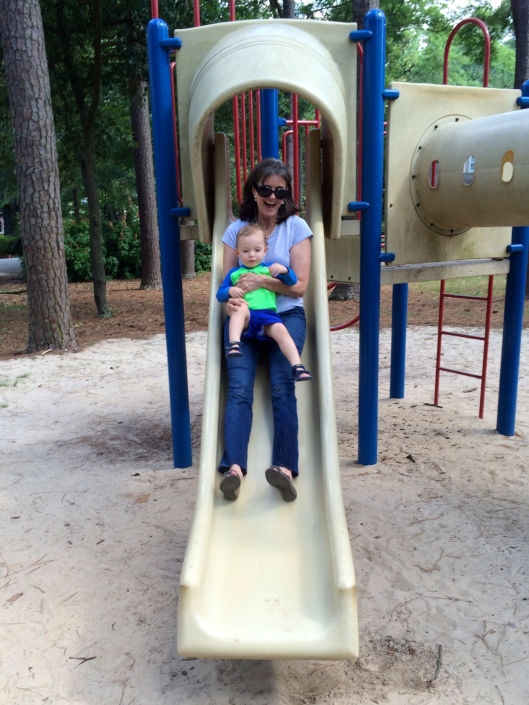 And then Colt decided it would be more fun to go down on his tummy.

And then I just love this little series…

One night we were fortunate to have our cousins, the Longs over for dinner. Colt loved getting to play with Henry and especially Margaret. 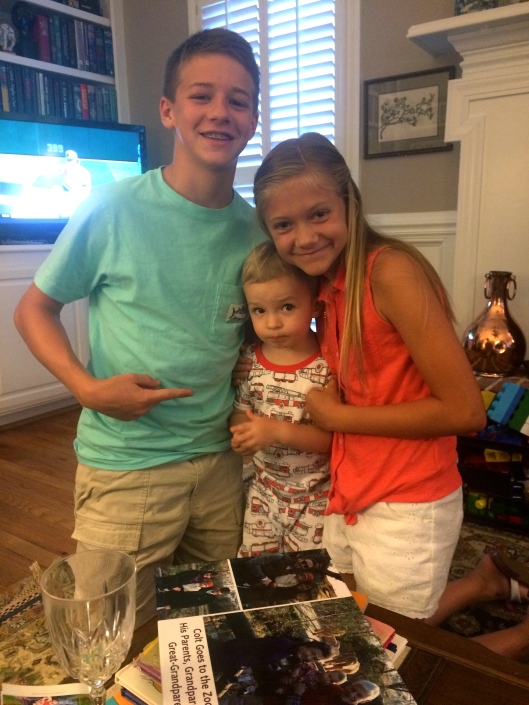 The next morning we visited the Longs to borrow their pool for a couple hours and Colt loved it!

He would literally jump off the diving board!

And how sweet is this?! Colt climbed up onto my mom’s chair and just snuggled up to her!

We spent Father’s Day weekend with my grandparents at the lake. Michael, Colt and I spent Saturday night with them and after dinner we took a boat ride around the lake. The night was so beautiful, weather was perfect and Colt loved it. Then we were able to go to church on Sunday with my grandparents – the church where Colt was baptized – so that was a treat. Sunday afternoon my brother’s family, my mom (my dad was traveling) and aunt all came to the lake for the day to celebrate Father’s Day. My Aunt Sheryl came fully loaded with everything to make a fantastic shrimp boil followed by homemade ice cream – both peach and cookies & cream. To die for! Such a fun day!

Nanny and Colt, back porch swinging.

Papa getting the wave runners started! 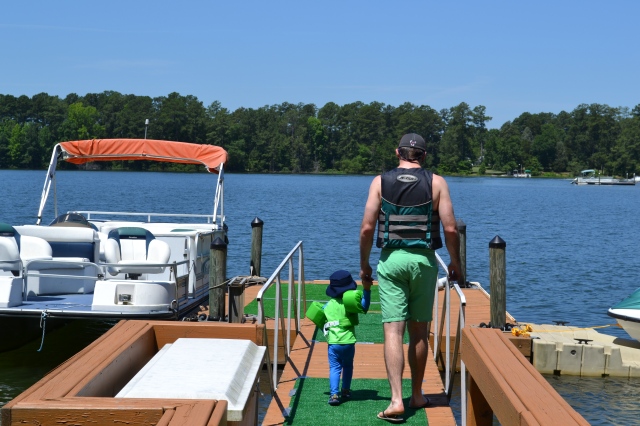 Michael walking little Colt out on the dock. 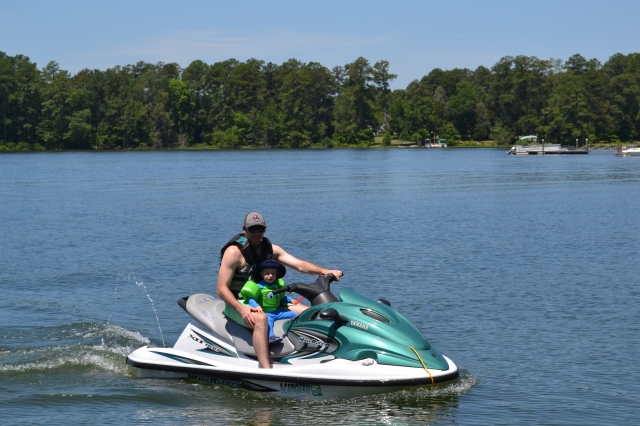 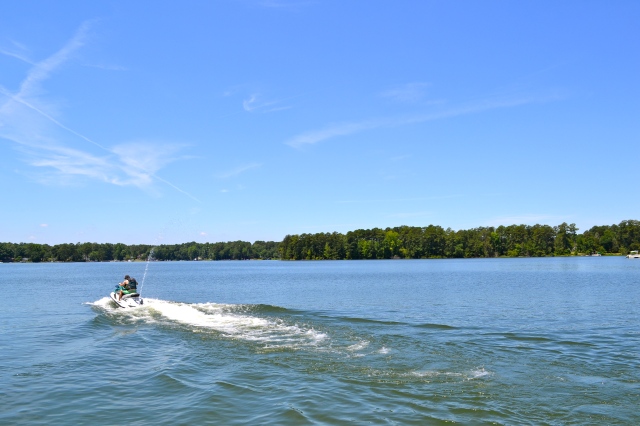 How cute is Augusta Clare?! 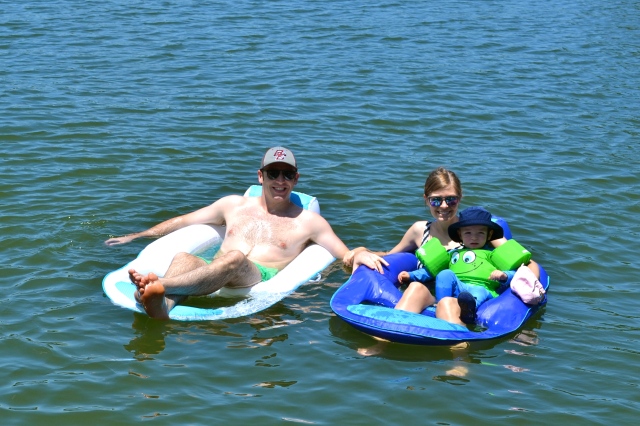 Such a special place. I’ve been coming here since I was 6 so it’s truly home for me. 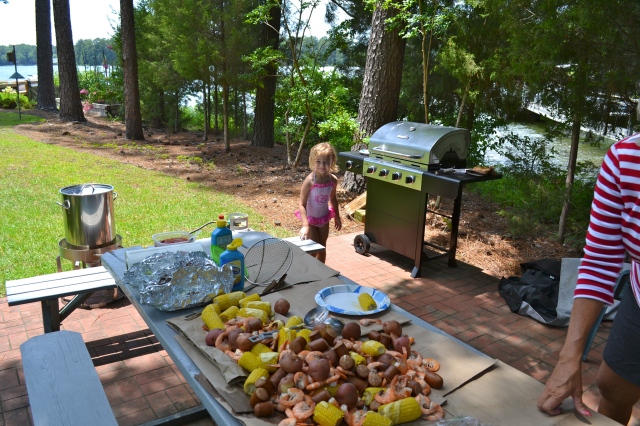 The incredible shrimp boil by my Aunt Sheryl!

My grandparents with their grandkids and GREATgrandkids. So special.

After that weekend we were sad to send Michael off to DC for work but we continued to have a blast in SC.

Sitting pretty in Anthropology’s chairs while Mama tried on clothes.

Colt loved driving around at the grocery store. 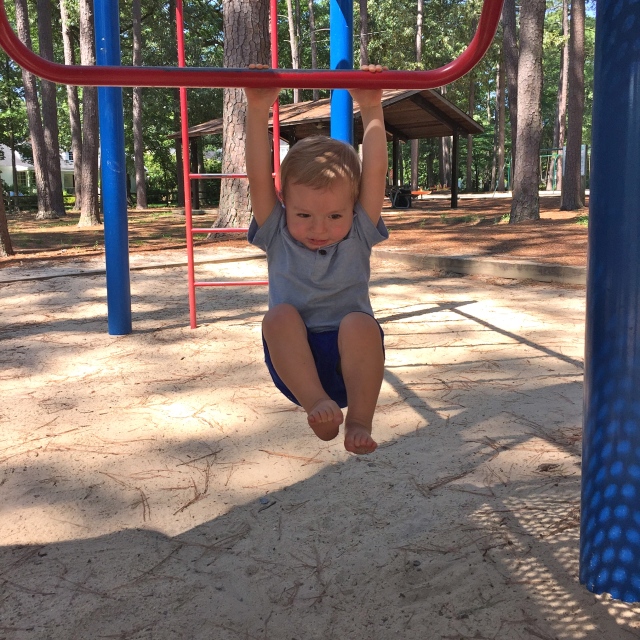 Hanging around the park.

It took a couple visits to the park before he would go totally under the sprinkler solo but once he did, there was no turning back!

Taking blankie out to play in the rain! 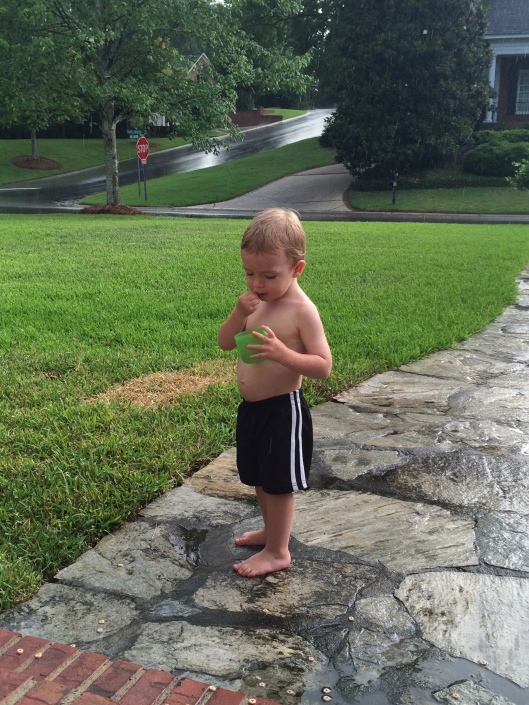 Eating Cheerios in the rain!

I can’t handle the cuteness. 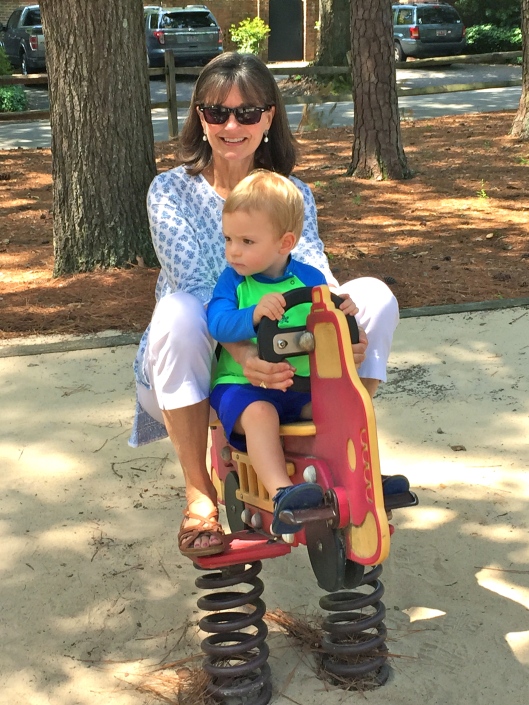 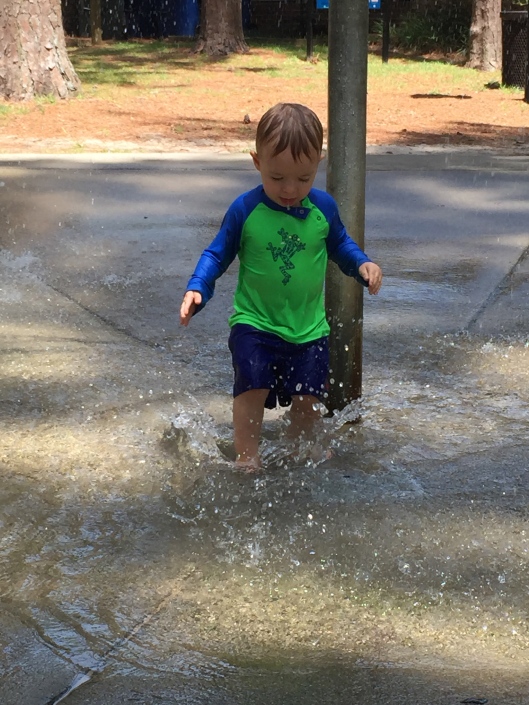 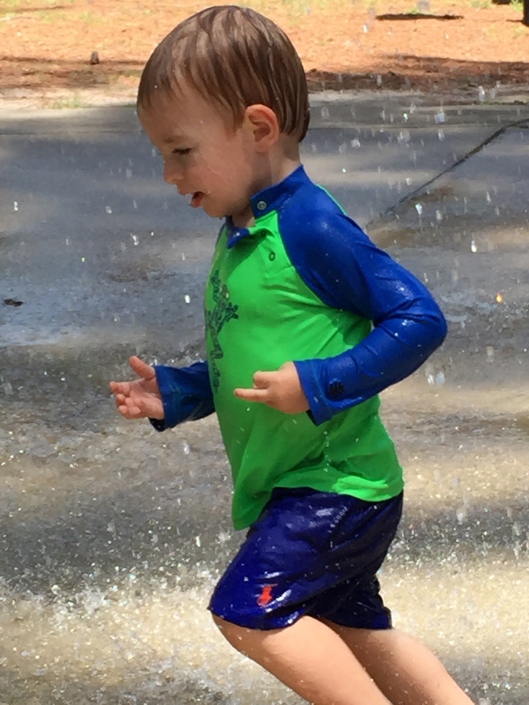 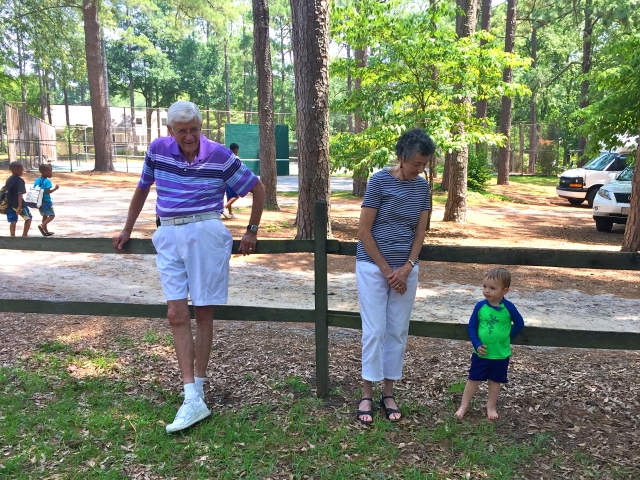 Making sure Nanny and Papa were in their “correct” places.

Before Colt and I took off for Colorado, we made one last visit to Charleston where we got to spend the night with Brad’s family and bonus! I got to meet up (albeit briefly!) with bestie Bess too! 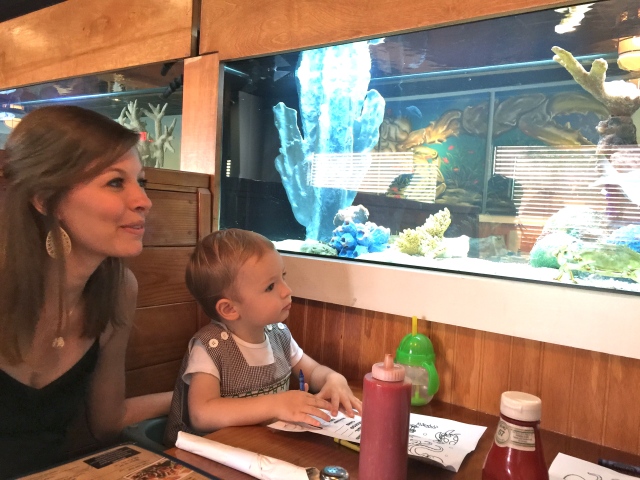 Going out to dinner with toddlers is much easier when you’re sitting right by a big fish tank!

Colt and AC in her playroom.

It was such a blessing to get so much time with my family, to watch them love on Colt and to watch Colt fall in love with them even more.

2 thoughts on “Summer in South Carolina”