Before the new baby arrives, I wanted to post a quick, picture-filled update of what we’ve been up to lately. Michael, Colt and I returned from the US to São Paulo the day before Colt’s 2nd birthday and although we didn’t plan a big party like we did for him last year, he somehow ended up with three birthday parties! First, while we were in Vail we had an early birthday celebration honoring Ollie and Colt. Then, on Colt’s actual birthday we had a little family celebration for which total credit really has to go to Michael. Colt had recently been getting into Mickey Mouse (how that happens even when he’s never seen the show, I have no idea?!) so Michael took that and ran with it. First, for dinner Michael made Mickey Mouse pancakes. Then he went out and bought a bunch of random Mickey Mouse gifts including a blow-up beach ball, a pack of socks, sandals, and a coloring book with crayons — all wrapped up in Mickey Mouse wrapping paper! I hadn’t really planned on doing anything since it would just be the 3 of us and, let’s be honest, he’s 2 and doesn’t totally get it, but it turned out to be really fun and Colt had the best time of anyone. He was/is obsessed with the gifts and has the cutest ever pronunciation of Mickey Mouse so we loved getting to hear him say it over and over too.

The boys and the gifts. 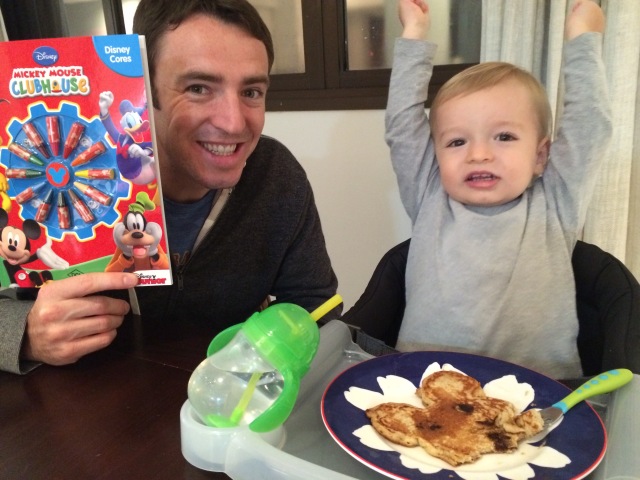 Can you tell he’s excited?

That Friday night we had some friends over to catch up and celebrate the birthday boy one more time! Just some gifts and cake but Colt was a happy camper!

Like his dad, Colt loves receiving gifts. 🙂 Thanks Hudsons!

Happy Birthday to you! 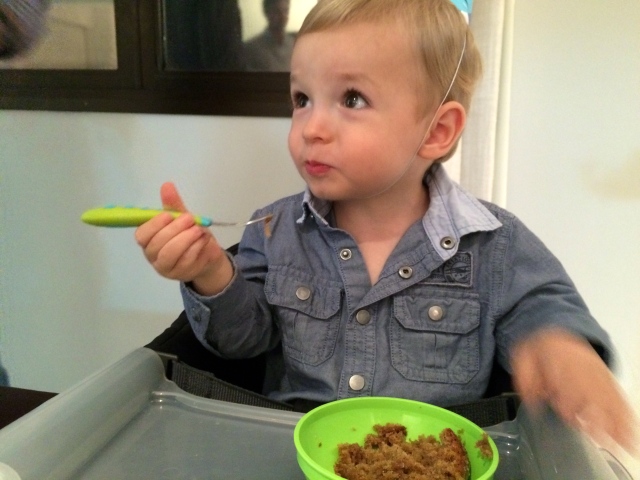 Upon Colt’s turning 2, Michael and I decided it was time to make a few of transitions in his life to help him be more of a “big boy.” The first big transition was giving up the pacifier. Colt has loved pacis since we first introduced them around 2.5 weeks old. In fact, I think he has basically used one to help him fall asleep every night and for every nap since then! Until he was 1 he would keep the paci with him throughout the day and around his first birthday we decided to make it a crib-only item. This was initially met with some resistance but wasn’t too bad, however we had no idea how we would get him off them completely. I was hoping to do it before the new baby arrived so that there could be some space in his life of adjusting to being without a paci where he wasn’t also seeing them all the time being used by someone else, but I was also nervous about doing it too close to the baby’s arrival lest he just revert back and start stealing pacis from the baby. We already have some things set up for the baby (bassinet, bouncy seat) and we often talk about how the new baby will go there and sit there etc. and one day (July 24!) Colt was really getting into saying how he was a big boy, not a baby, so I decided to capitalize on it. I told him that pacifiers were only for babies and that he wasn’t a baby, he was a big boy. I asked if he wanted to give his pacifiers to the baby so he put his 2 pacis in the bouncy seat in our living room and left them. That evening we kept talking about how he was such a big boy. When Michael got home from work I told him that I thought Colt was ready to give it up so then we actually had him put them in a bag and kiss them goodbye and talked more about how they were going to the babies. That night Michael put Colt down for bed and reminded him that he was a big boy, that the pacis were with the babies and laid him down. And…no tears! He actually did end up crying before going down for naps for the first 4 days but it just required a little extra back rubbing and he was fine. He never cried at night but what’s funny is that while he used to fall asleep within 5 minutes of being laid down for bed, he now stays up talking, singing and playing with his stuffed animals for about an hour. It’s totally entertaining to watch and listen to him on the monitor. He still mentioned the pacis when he was going to sleep for the first week or two but would also always say that they were with the babies. I think it just took some time to get it out of his head as being part of his routine. Anyway, all in all much easier than I was expecting. 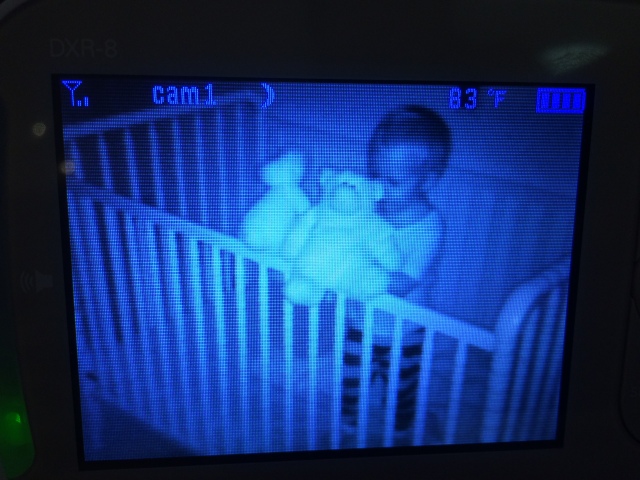 Up playing in the crib.

The next transition was to get him off the bottle. This might sound crazy but up until his second birthday we were still giving Colt warm milk from a bottle like a little baby. Even worse, he wouldn’t even hold it himself! He would curl up in our laps and we would give it to him like he was a newborn! We actually had this practice for several reasons. 1) Guaranteed built-in snuggle time! It was always so sweet and I totally loved it. 2) Teeth. I never wanted him to just walk around sipping from a cup of milk all day (and especially not all night) because it’s bad for their teeth. With our set-up, he had it at 2 specific times/day (morning when he woke up and after waking up from his afternoon nap) and the whole thing lasted 2-3 minutes and then it was over. 3) No mess. Spilled milk is kind of gross and this way we never had him walking around with a cup spilling it places only to get spoiled and nasty. So basically it was just easy, Colt liked it and I liked it so I never saw a reason to want to change. Michael, on the other hand, thought it was totally ridiculous that our 2 year old still took milk like a newborn and insisted that we change. I wasn’t sure if Colt would mind but he didn’t seem to care at all. One day we just switched it to a sippy cup and told him that he needed to hold it himself and it was done. We have now started the “tradition” of doing milk on the couch in the living room and that is also his designated cartoon-time for 15-20 minutes. Michael and I like that we still get to cuddle with him for a little bit but it also gives us some time to make our coffee and just wake up in the mornings as well. Plus it encourages Colt to still drink everything in one sitting so that, again, he isn’t walking around with the milk cup during the day.

All ready for his milk!

Blanket and books for everyone.

Superman sometimes likes to sit on the coffee table.

The other thing that we have started to implement with him is the use of a toddler-clock in his room to help indicate when he should be sleeping versus when he is “allowed” to be up. We got this Tot-Clock and have been really happy with it so far. Basically the face of the clock lights up yellow during the day and is blue at night and during naps. It’s very user-friendly and easy to figure out for a parent and it was an easy association for Colt to learn blue = sleep and yellow = awake. He is still in a crib so it’s not like we have the issue of him getting out of bed when he should be sleeping, but we thought it would be good to introduce this and get him accustomed to it now so that when he does transition out of the crib it will (hopefully) be easier for him to know when he should be sleeping and when it’s OK to get up. Although it doesn’t necessarily make him sleep longer, it has been helpful for days when he wakes up too early for us to be able to remind him to look at the clock and go back to bed, etc. Sometimes he will put himself back down and other times he’ll play until he notices it turn yellow and then of course sometimes he’ll cry too. But he’s learning it.

Otherwise we’ve just really been enjoying being back in SP. 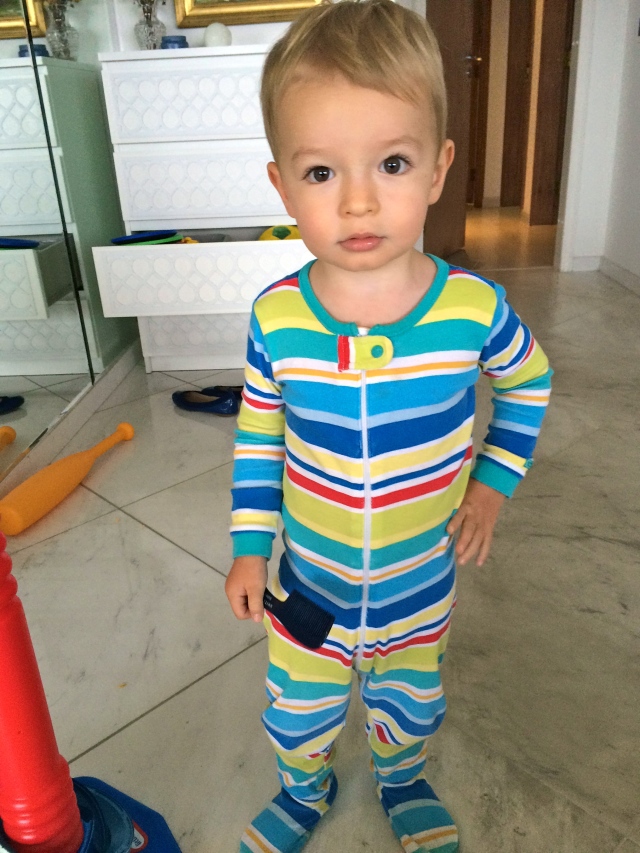 Could not love him any more.

Out with Dad to the paderia for some pão de queijo!

Colt is so much better dressed than me!

Staying occupied at the Havaianas store.

Hide & seek with Dad! Can you find Colt?! 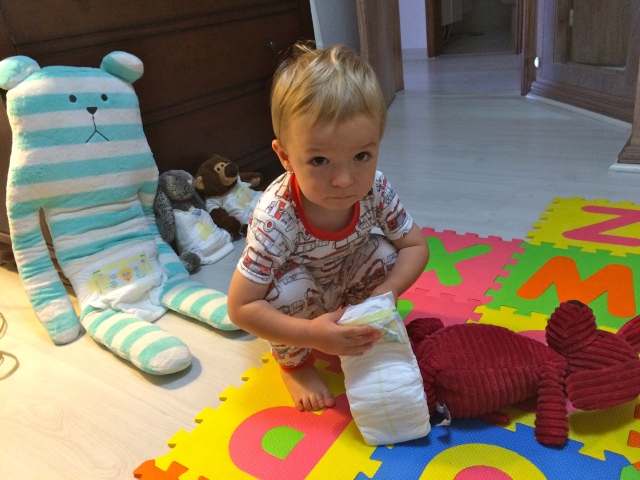 Little bed-head making sure everyone has a diaper on! 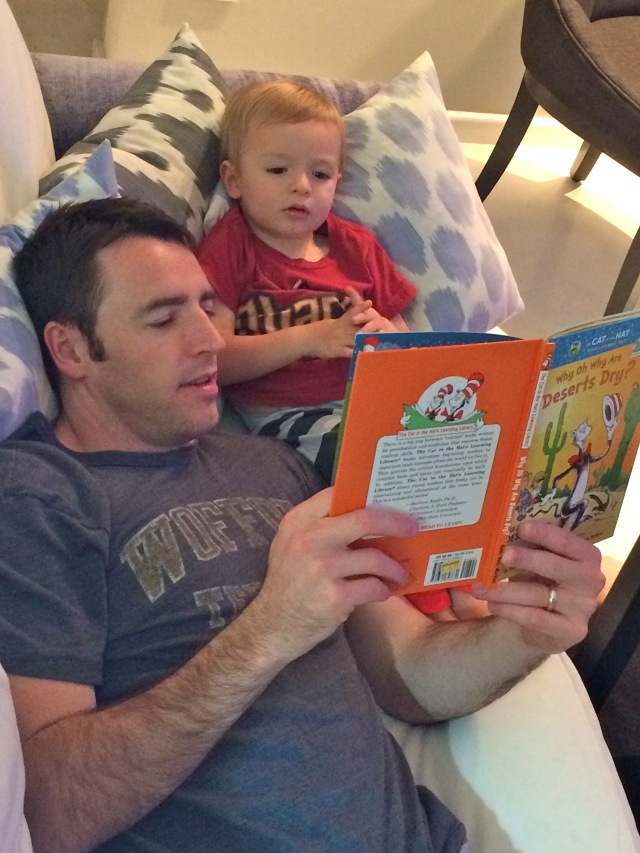 Riding a bike! He could honestly do this allllll day long. 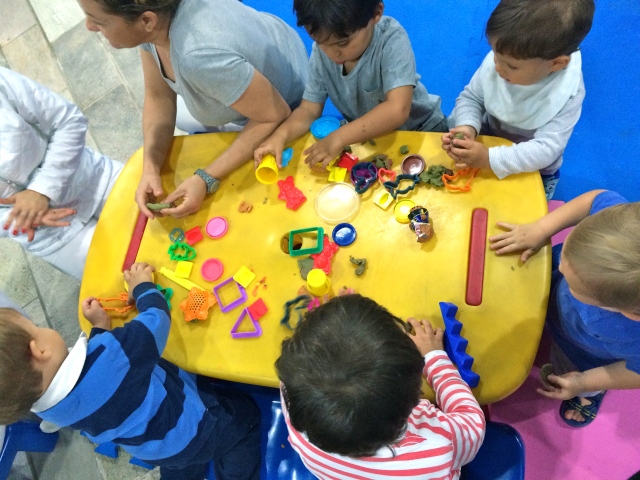 Play dough in the play room with friends. 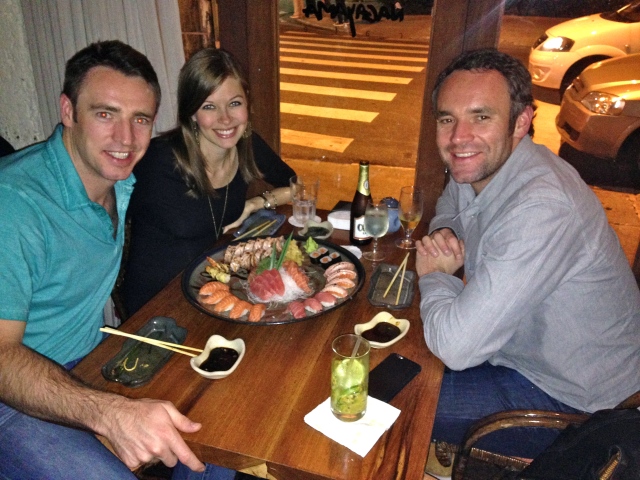 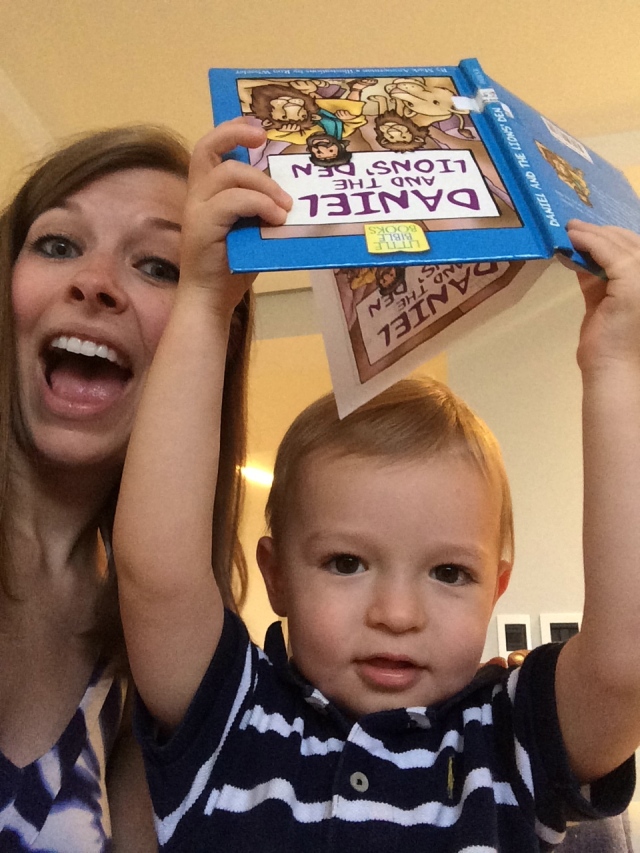 Taking it all the way to the goal!

Colt so proud of lining up the crayons! 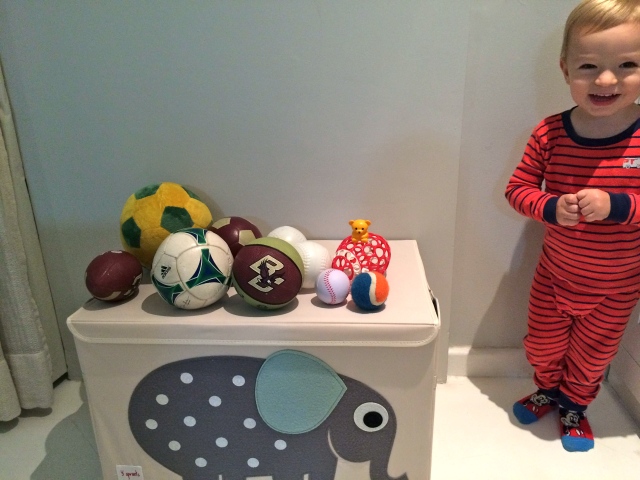 And here he is lining up all the balls. 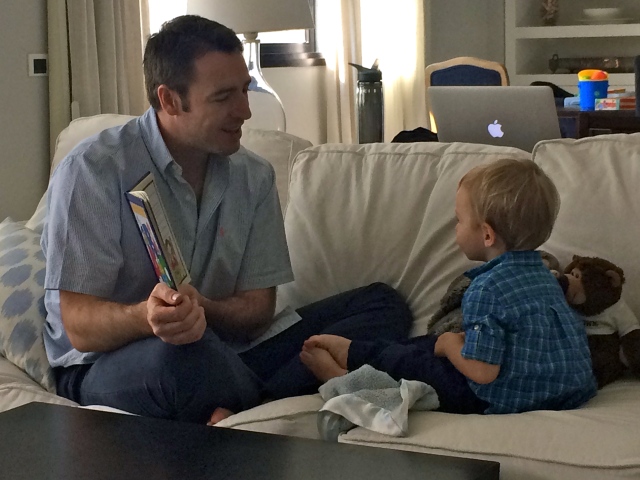 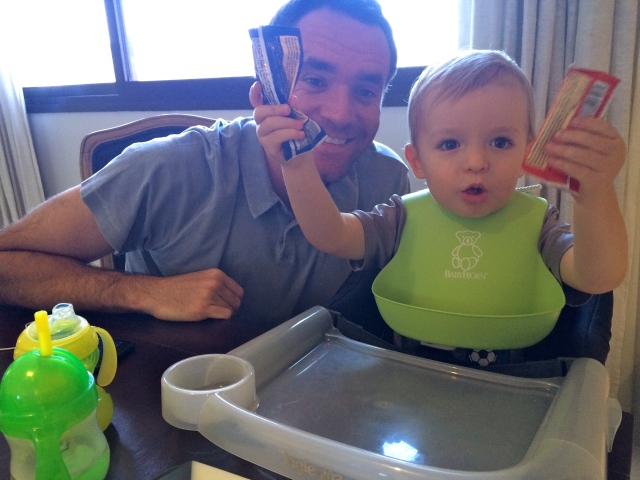 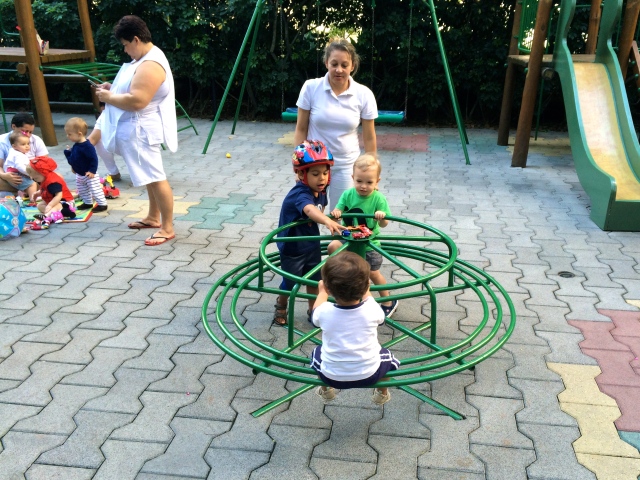 Playing with friends (and nannies) in our apartment complex.

We are so blessed to be doing life with such great friends who are also in the (exact!) same stage of life. These 3 are within 4 weeks of each other! 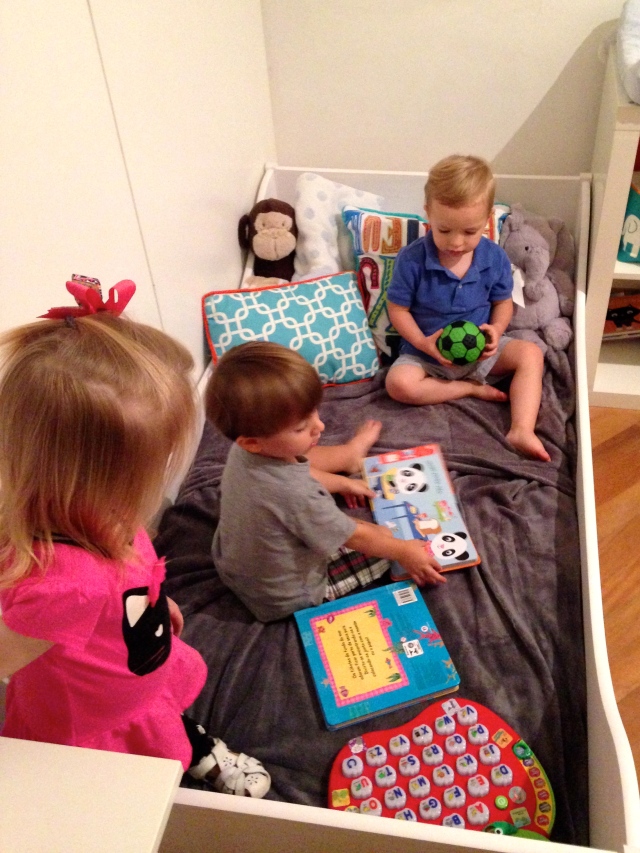 And exploring the tree house they have there! 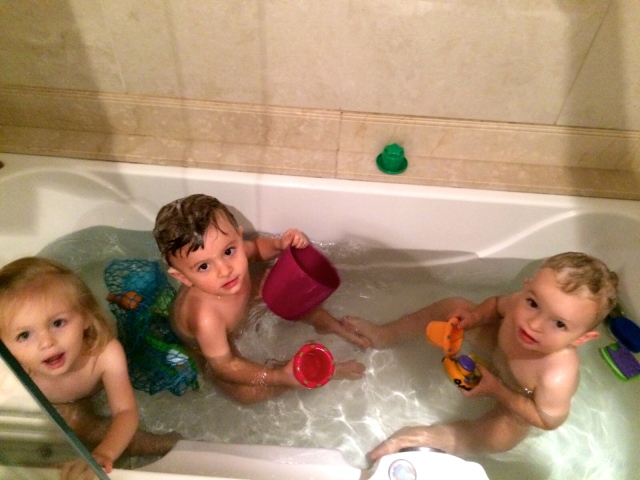 And now for one of my favorite stories lately… this past Friday night Michael and I went to dinner with the Hudsons and the Parkers.

Our first kids are all within 4 weeks of each other and we all got pregnant for the second time close to each other again. Paige had her second, Coralie May Hudson, on June 22. Michelle was due August 18 and I am August 22. Well, on Friday, August 14, Michelle was having contractions all day but she said that she and Jamie were still in for dinner that night. We met at our favorite local Argentine steak restaurant around 8:15 and proceeded to have an awesome dinner together. 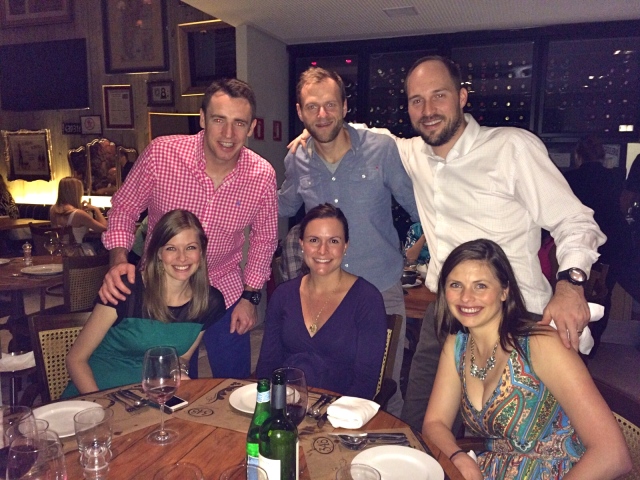 The whole group at dinner.

Michelle was sitting in between Paige and me so we talked about and timed her contractions all through dinner. They definitely seemed to be progressing but she was handling everything like such a champ that an onlooker would never know the difference. She and Jamie had driven with their hospital bags in the car just in case after dinner and dessert (and a coffee for Jamie!) we all agreed that it was best that they went ahead and drove straight to the hospital.

With Michelle right before they took off.

They arrived a little after 11pm and Jamie texted with Paige and me to keep us up to date on Michelle’s progress. We received a text that they had arrived and a few minutes later he said that the nurse just came to check on her and she was at a 10!!! Paige and I couldn’t believe it but sure enough their sweet baby girl, Finley Sophia Parker, arrived just before midnight! It was totally crazy!

We went to visit them at the hospital the next day and the whole family was beautiful and doing great. What an incredible labor, right?! I’m hoping for the same experience. 😉 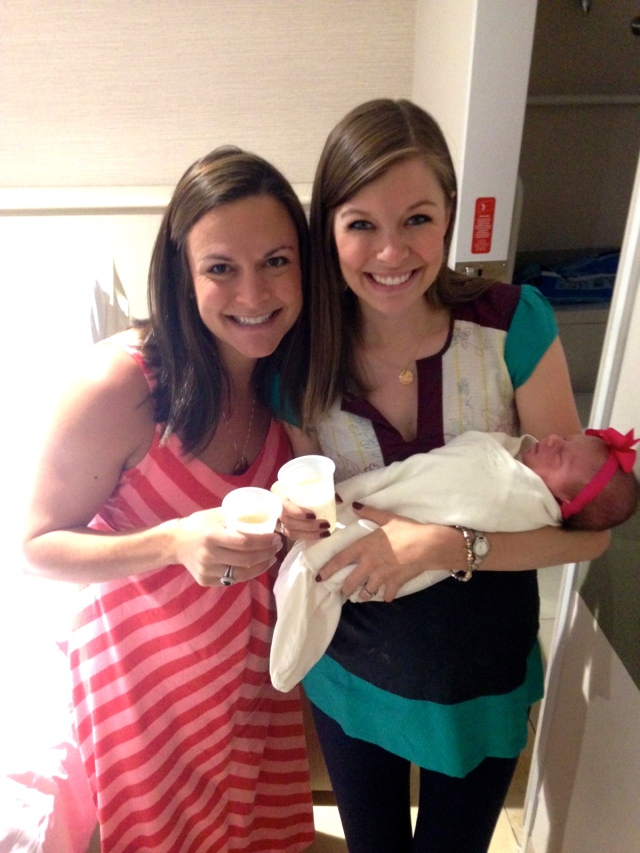