October was wonderful – diving deeper into fall, enjoying our neighborhood, Michael’s marathon, visits from family and our first USA Halloween with the kids!

First, a couple of shots from a friend’s birthday party at the local fire station! 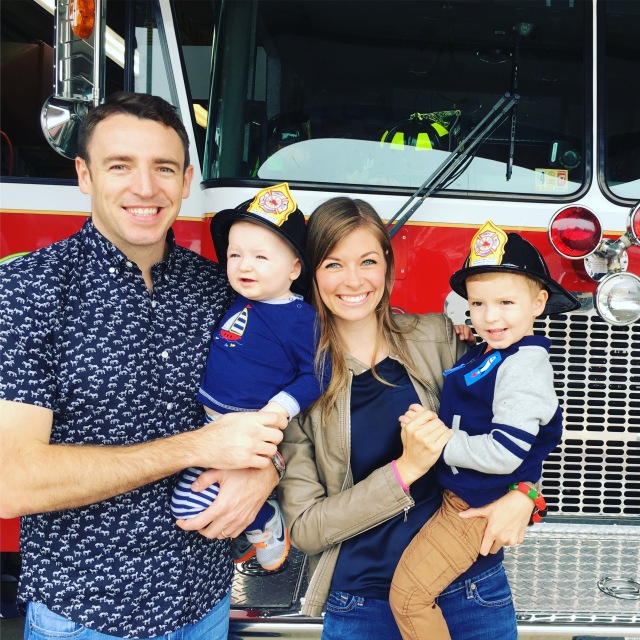 Here I attempted to take both kids on a fun day out to a local pumpkin patch / farm extravaganza. We were supposed to meet up with Colt’s class, however we were running a few minutes late and once we arrived and I saw how PACKED the place was, it was clear that we probably wouldn’t be connecting with anyone. We did have fun with the petting zoo and some other things but it was also a total mess for me trying to handle both kids in that environment. For example, when Colt needed to use the potty we had to stand in line for a porta-john. Then, he was totally weirded out by it (who can blame him?!) so I needed to be in there with him but he was freaked out so he wouldn’t go! All the while, Finn is in the stroller parked outside so I kept having to open the door to make sure he was OK. Or the slides — there were lots of great, big, fun slide options but Colt didn’t want to try them since I couldn’t go down with him as I needed to stay with Finn. Finally I convinced Colt to try one that seemed more mild so Finn and I went to the top with him and sent him off. About 1/4 of the way down he started spinning around and screaming. When he reached the bottom he was hysterically crying. Meanwhile I was struggling to run down this big hill with Finn in the stroller (and I about flipped him right out!) but since Colt was faster than we were, all of these people came up to him at the bottom of the slide like, “Where is your mom you poor thing!?” Anyway, just stuff like that… I actually think it would have been a total home run had there been two parents but we still made some funny memories. 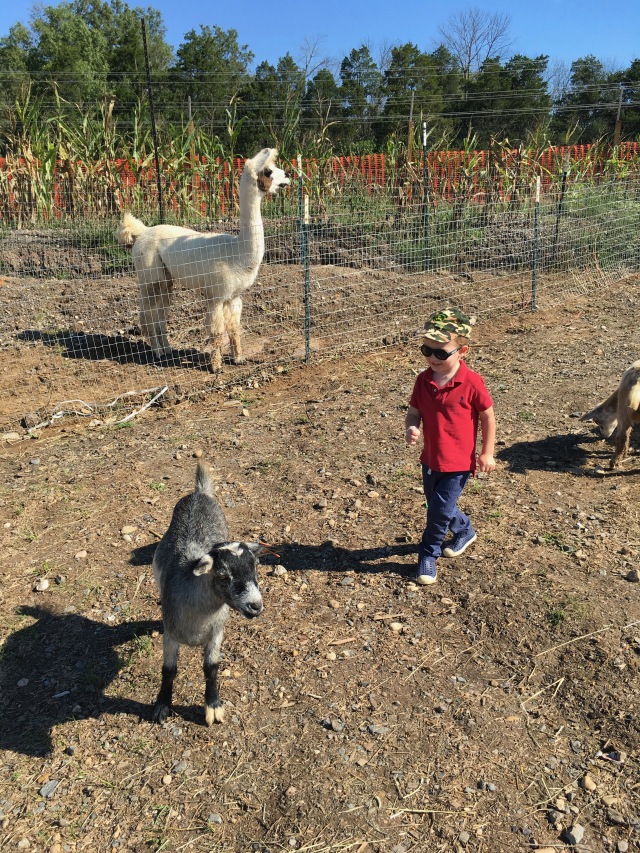 Colt at the petting zoo at Cox Farms. 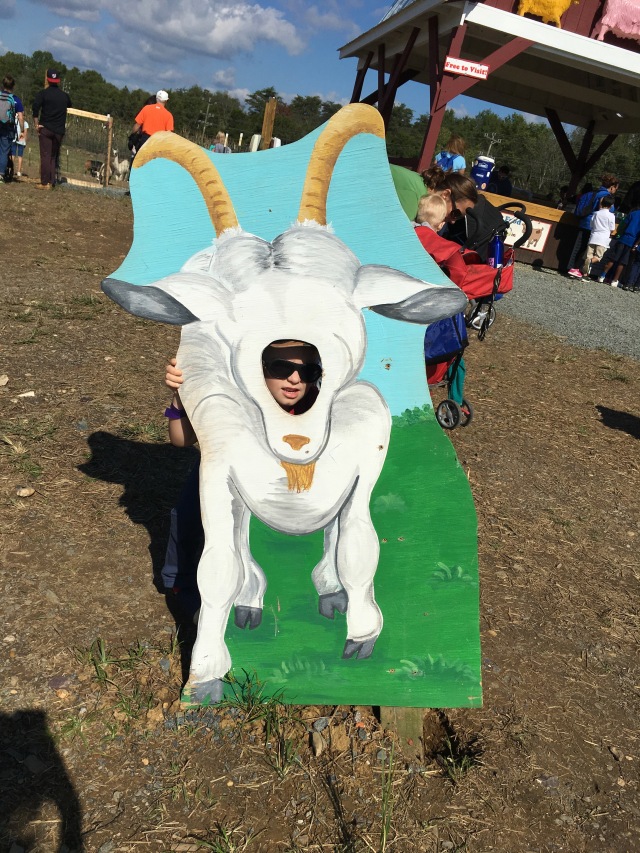 King of the mountain!

Back at home and around the neighborhood. 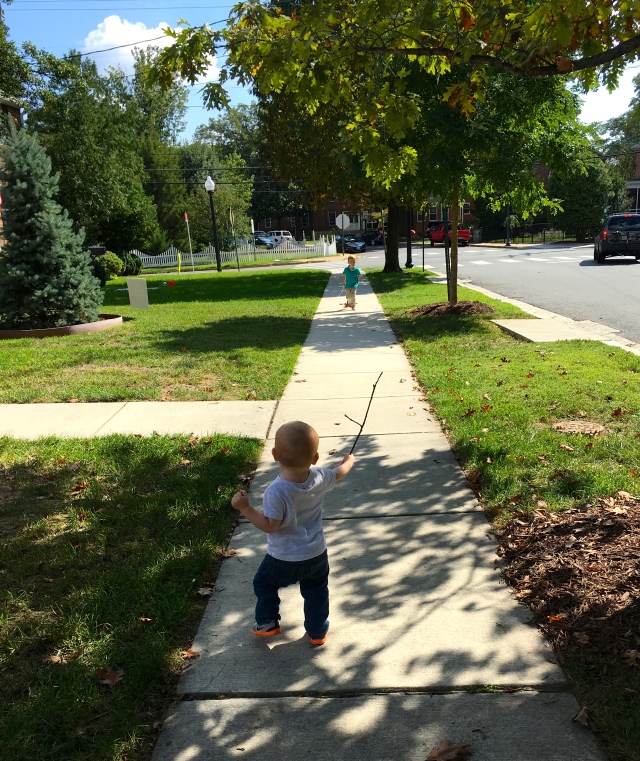 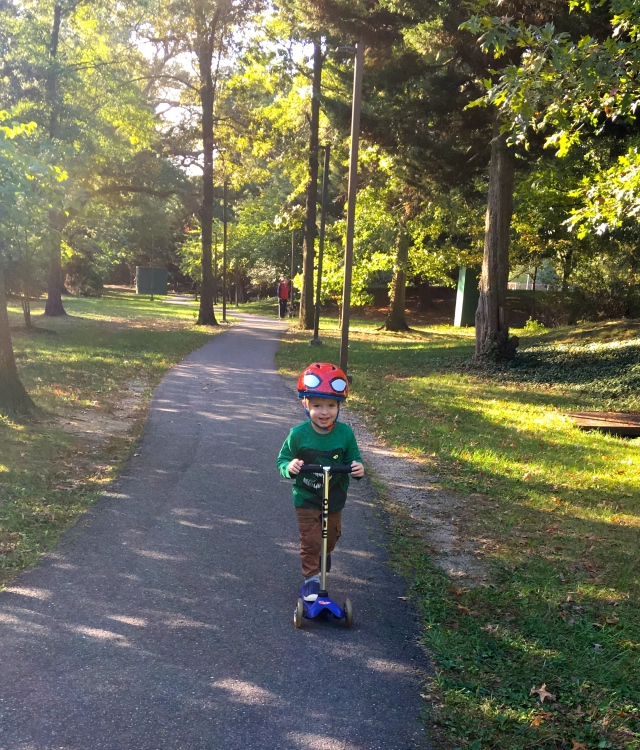 Scooting through the park to school!

Mom creepily trying to sneak a pic of Colt in his classroom.

After school picnic in the park.

Sidewalk chalk in the front yard as Superman, because, why not? 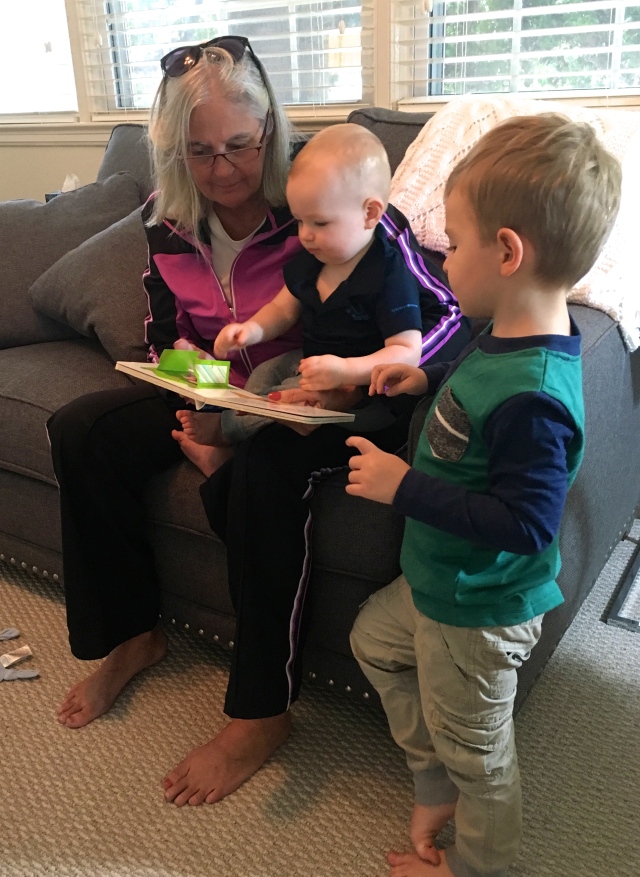 And my Aunt Sheryl visited!!

As part of Michael’s birthday present I had gotten us tickets for the National Symphony Orchestra at the Kennedy Center. We hadn’t been to the Kennedy Center since we’d been back and we love the symphony! It knocked our socks off.

Outside at the Kennedy Center.

Also scheduled for that same weekend, Michael and I went to see Adele in concert which had been part of Michael’s birthday gift to me back in March! She was absolutely incredible!! It was awesome! 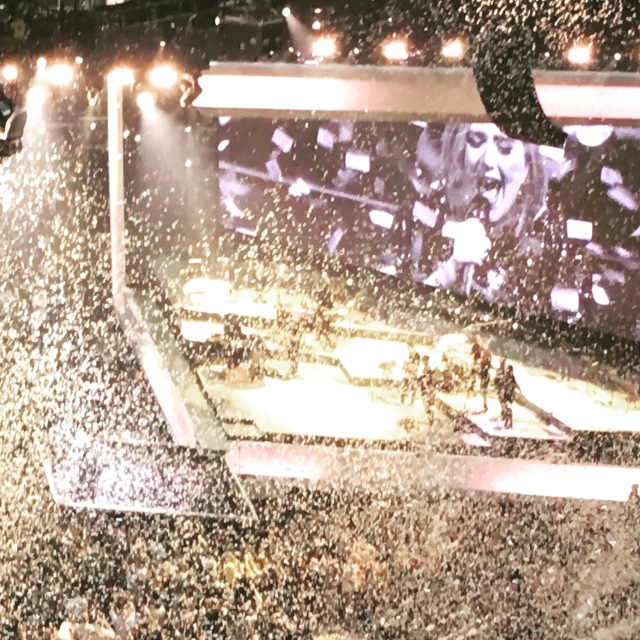 More pumpkin-patch fun at a church down the street!

Finn is really a gourd man. 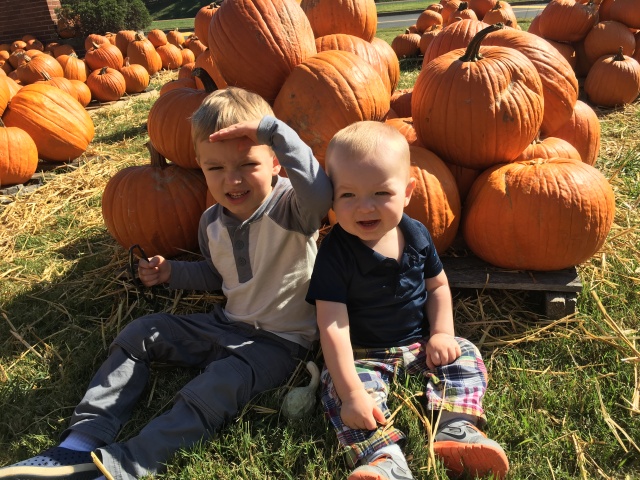 Followed by a trip to the playground!

Off on another adventure!

Colt teaching Finn all about the dinosaurs. 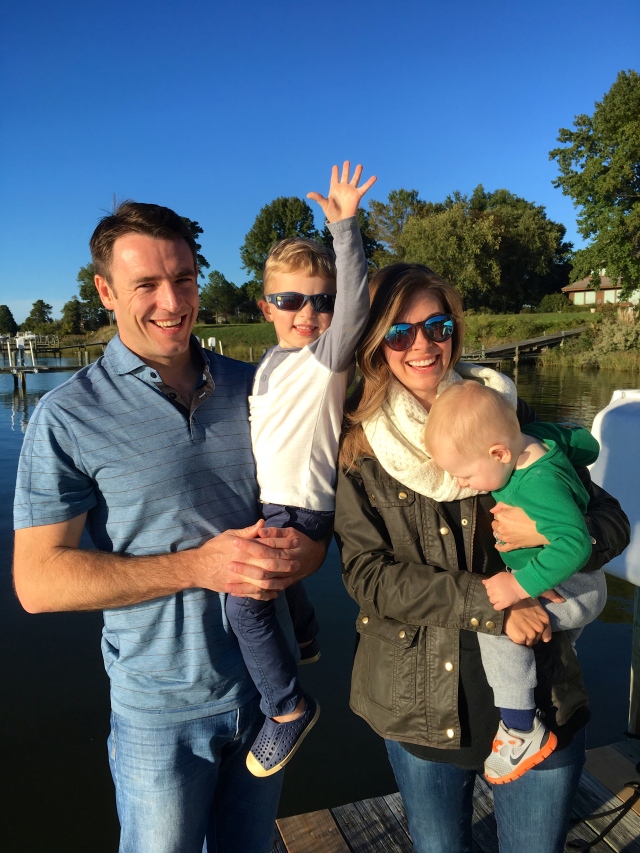 Family pic from a quick weekend away with friends! 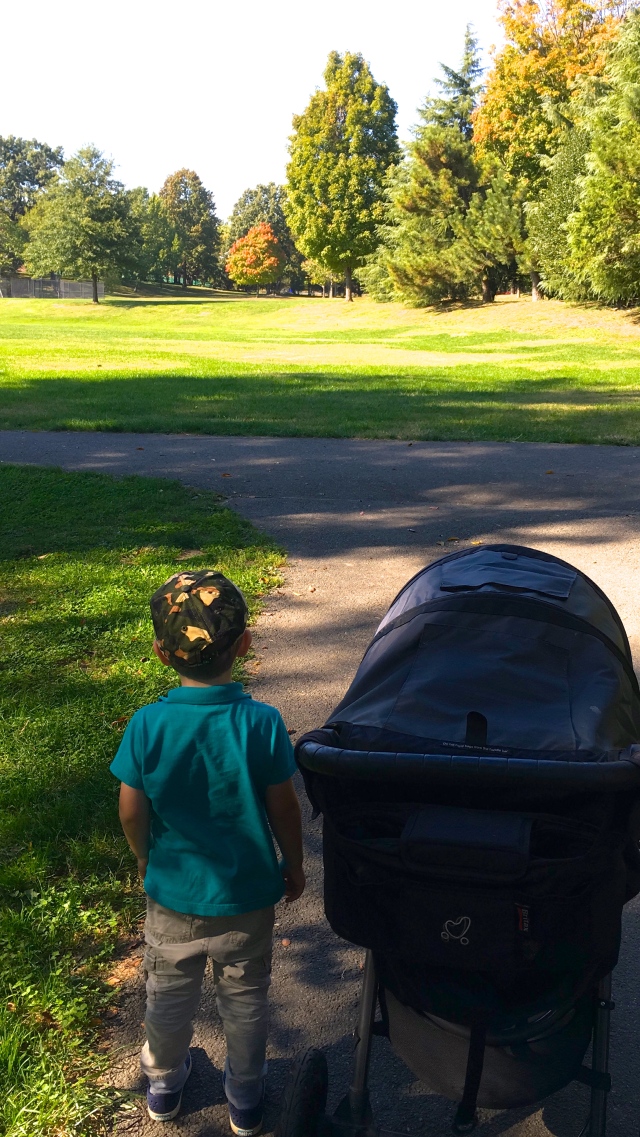 Watching the trees begin to change. 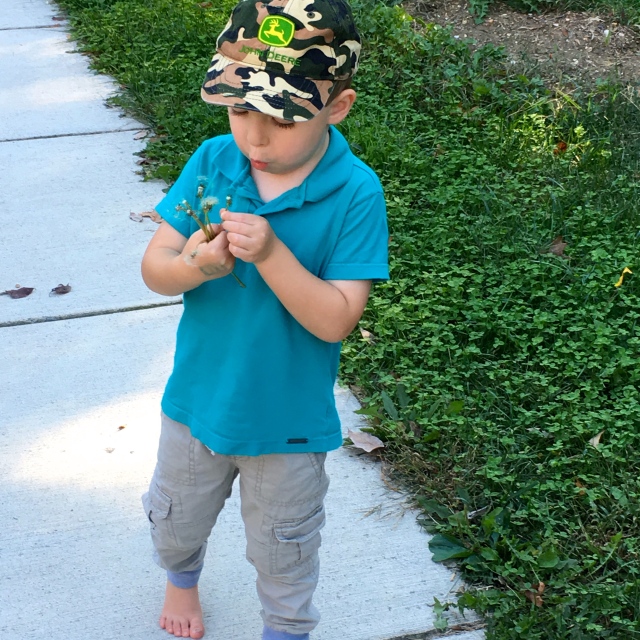 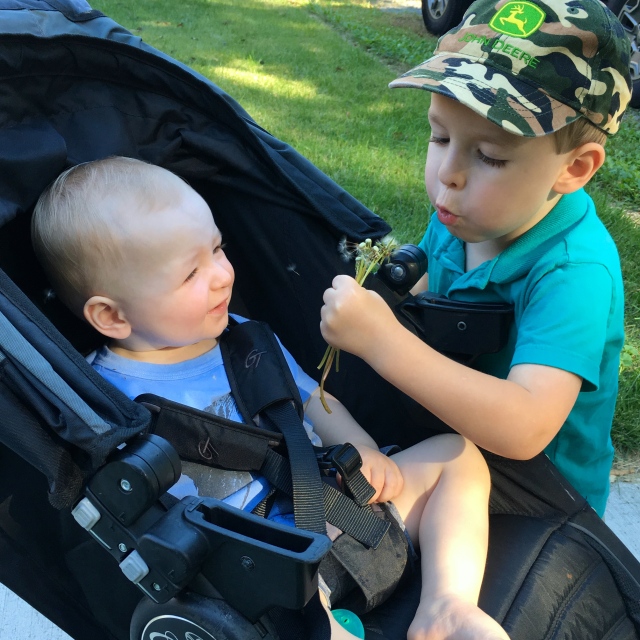 And blowing them for Finn. 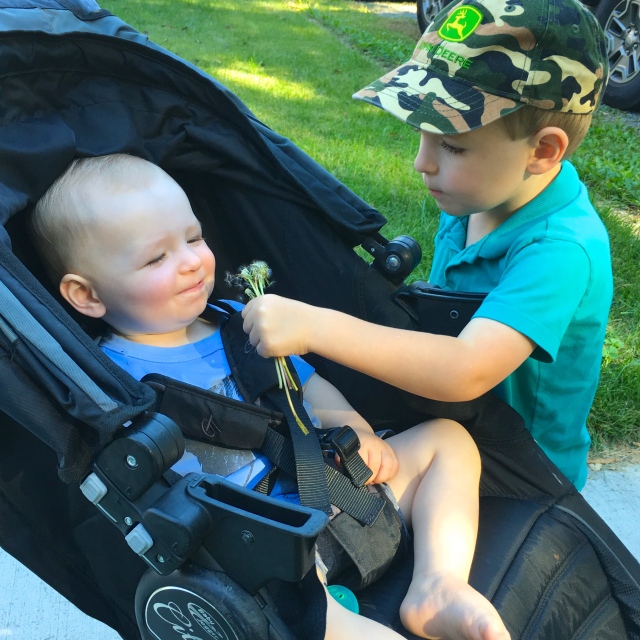 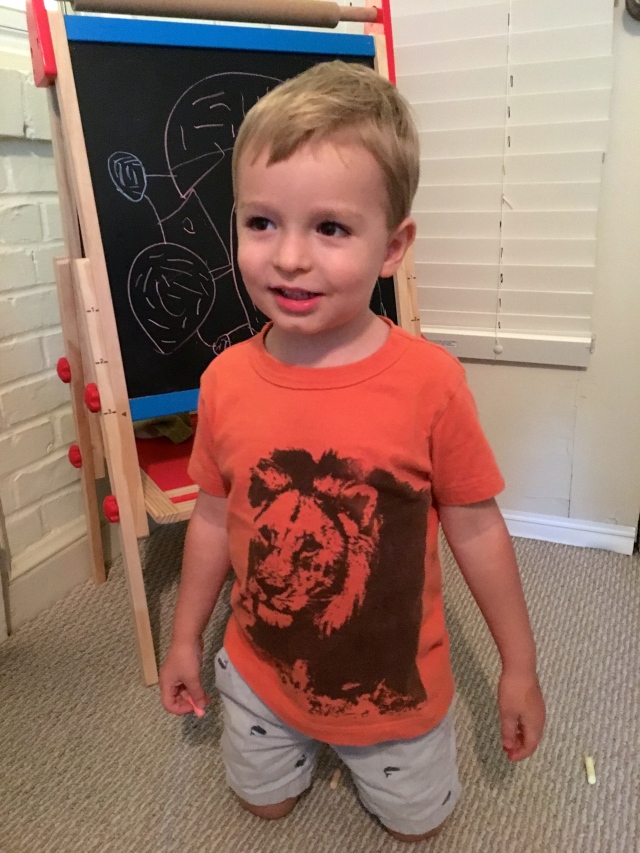 Demonstrating “Pumpkin Pose” that he learned in his yoga class at school. 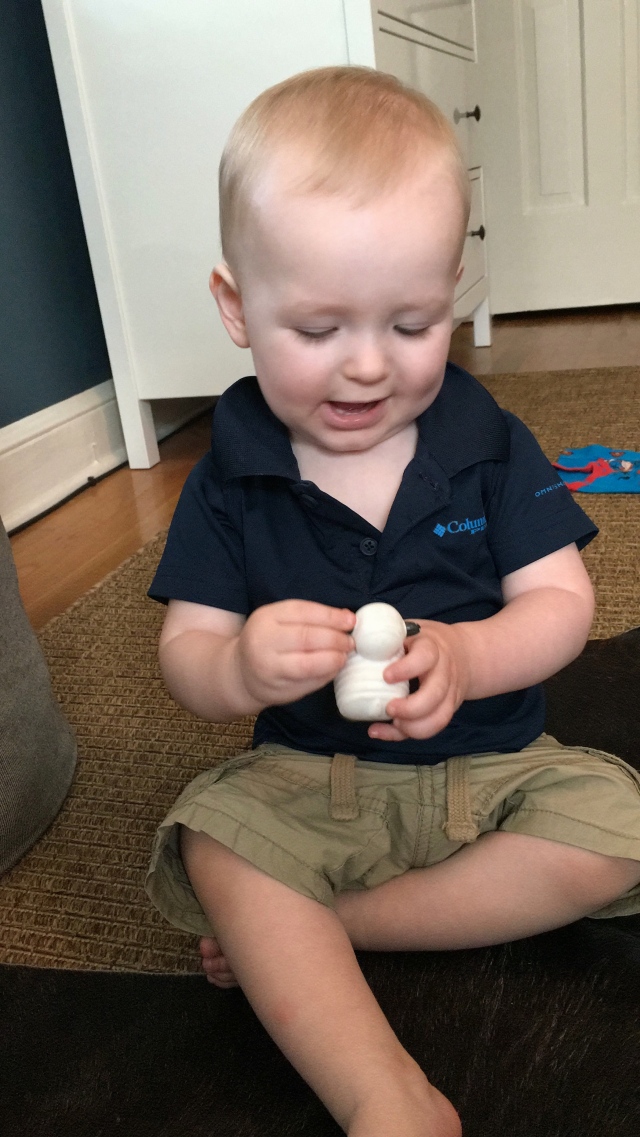 We were happy to have my parents come visit for a few days!

Off to a black-tie event. They always have their own things going on as well when they visit.

My mom joined Colt at school for lunch. So cute!

My parents also gave Colt his Halloween costume. He was pretty excited to try it on!

And we carved pumpkins! 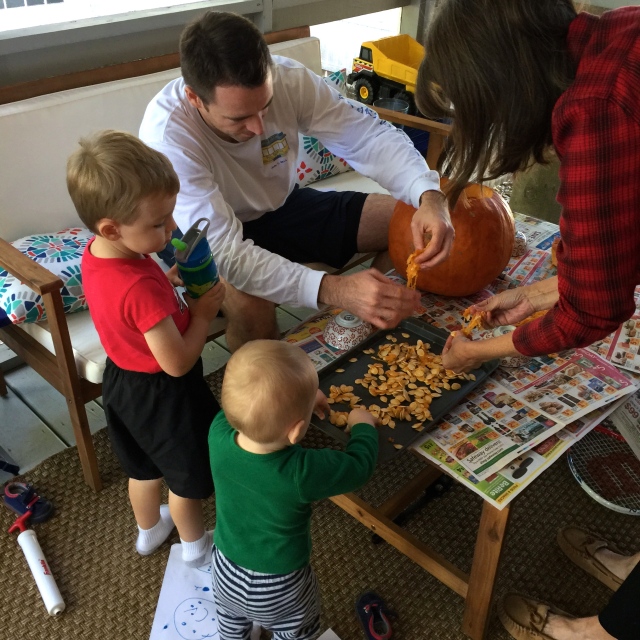 Getting out the seeds.

Colt got to draw the face on the pumpkin and Michael carved it exactly as he drew it.

I was pretty impressed by Colt’s skeleton drawing at school.

Peeking in on bedtime poems with Dad.

Cheering on our hero! 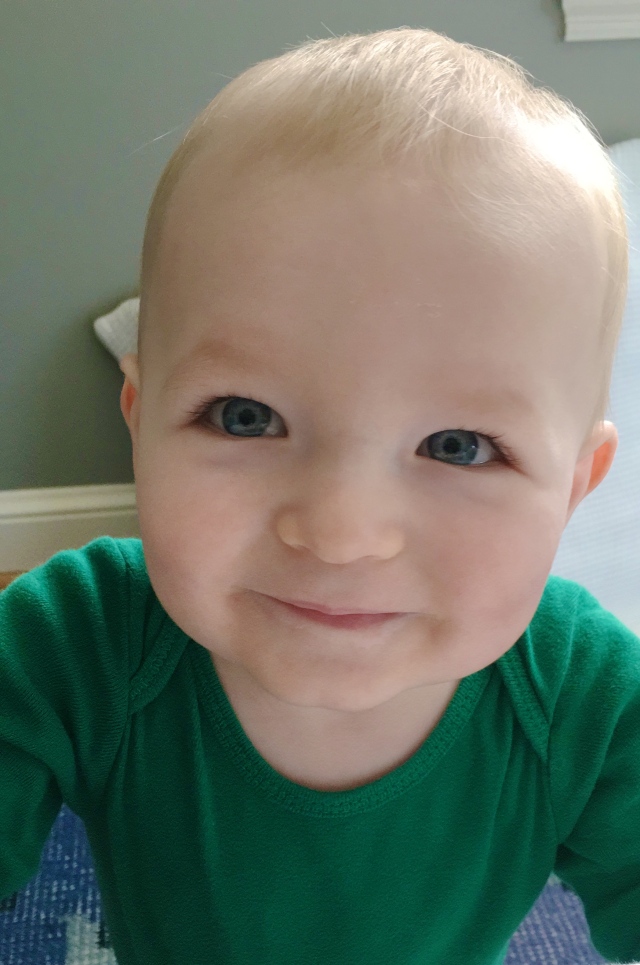 Like I said before, it had been years since we celebrated Halloween in the US and we had never done it with kids, living in a neighborhood, etc. so we were pretty shocked by how much FUN it all was. Our neighborhood is super sweet, full of young families and kids. Many of the houses were fully decorated and a few were even passing out drinks for the parents. We tried explaining the whole “trick-or-treat” concept to Colt but the first few houses he kept just walking up saying, “Treat!” because he wanted to be sure he got a treat and not a trick. After a few houses though he got the hang of it and soon was excited to run up to front doors, ring the bell, say trick or treat and then thank you. And he was extra happy if he was allowed to choose two or three treats!

Such a sweet Spiderman.

Bravely going up on his own! 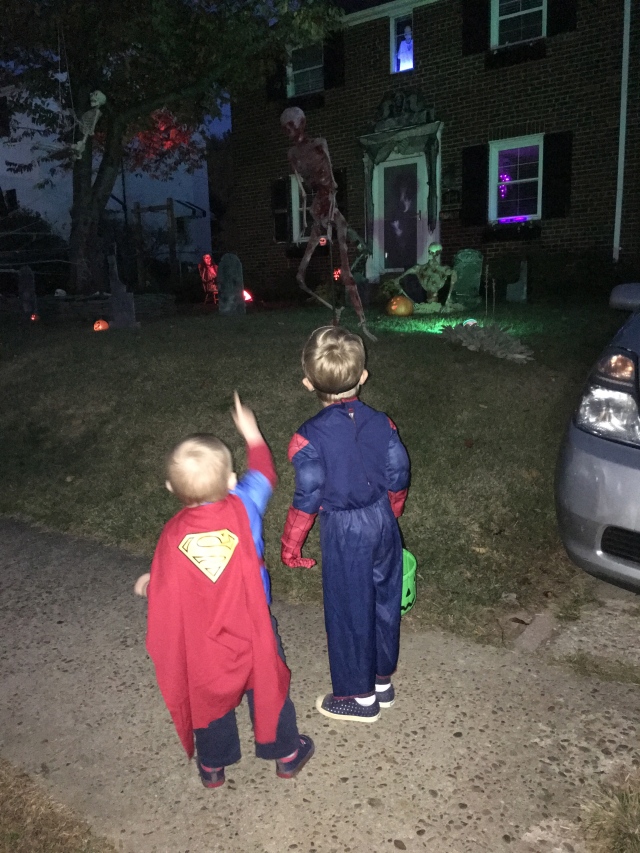 Finn isn’t so sure about everything going on here…

The kids also loved handing out candy at our house. Only two costumes made Finn cry (ha!). Anyway, I’ve never thought of myself as much of a Halloween person so it was such a surprise to me how much fun it was to do with the kids — we are already looking forward to next year!