What a wonderful wedding weekend in the Windy City of Chicago!  Michael and I traveled to Chicago this past weekend to celebrate Mark & Elise’s wedding and we had the best weekend EVER.

The first main event was the Rehearsal Dinner on Thursday night.  It was held at a cool Chicago restaurant with amazing Italian food – Sapori Trattoria.  I think the best part of any Rehearsal Dinner is spending time with everyone and getting to know “the other side” through the toasts.  Mark was one of Michael’s roommates and best friends from Boston College so we know him well, but it was great getting to know Elise a little better — she is fabulous.  After dinner we went for drinks at Kingston Mines Blues Club which was a blast.

On Friday, the boys were off getting haircuts, manicures (seriously) and straight razor shaves, so I took the opportunity to walk up and down the “Magnificent Mile” on Michigan Avenue appreciating the amazing array of stores.  Later, while Michael took photos around Chicago with the wedding party, 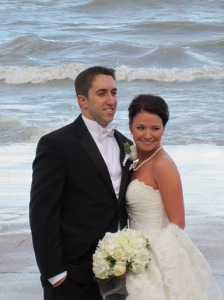 I got a drink at the top of the Hancock building with some of the group.

The wedding Friday night was absolutely beautiful.  It was held at the historic Knickerbocker Hotel (conveniently where we were staying).  The ceremony was so lovely and was followed by a fun cocktail hour leading into dinner.  Table 5 at dinner was simply unforgettable. 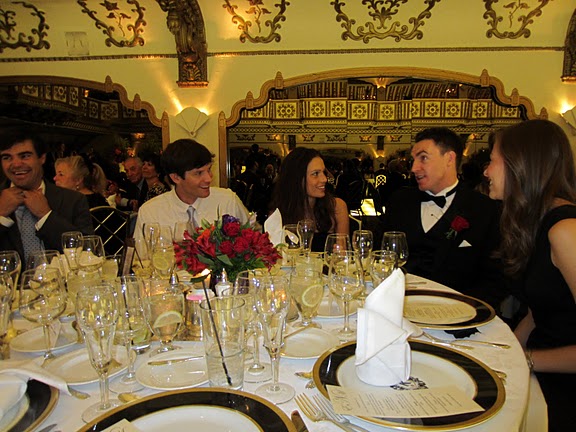 After a delicious meal, the party got started and the light-up dance floor was put to great use.

Following the reception the group had drinks in the lobby and made a final stop at Kerryman’s Bar.

Saturday was all about STATE.  State is a sport’s bar that even boys might say has too many flat-screen TVs and too much football, but… it’s pretty awesome.  After spending the day there with a big group, Michael and I took off for dinner and a Second City comedy show.  Seeing Second City was a major highlight for me, and looking through the Playbill at all of the alum who have come through there — Steve Carrell, Steven Colbert, John Belushi, Joan Rivers, Chris Farley, Tina Fey… it was amazing.  The show was hilarious and lasted from 11pm until 2am!!  So much fun!!

Then Sunday we flew back to our little home in San Francisco to get ready for a great new week.  We hope YOU are having a great week too!!