Days before Finn was born, I wrote a post called The Calm Before the Storm. We were in that special season of life, awaiting the birth of a new baby, and things were calm. But Michael and I also knew that we were on the cusp of many other changes that would rock our worlds like crazy.

As we sat in expectation of Fincher’s arrival, we were also working towards a move back to the US. At the time, we weren’t sure if Michael would get the position at the DOJ or if he would pursue a transfer to Jones Day’s DC office, and we continue to be surprised along this journey as it has actually been a little bit of both. But I’m getting ahead of myself…

There is so much that I want to write about, to document and capture for our records – for our memories – but I think before I can write about the moments and the details I need to go through the big-picture saga that has been the past few months. It certainly felt like a storm, but by God’s grace I think we are finally walking out on the other side.

We welcomed sweet Fincher in mid-August and then had a stream of grandparents visiting for the next 6 weeks. I had a pretty brutal arm infection that made me miserable for a couple weeks and then we were to October. In October Michael completed his final interviews with the DOJ and was over the moon to be offered a position with them, pending a routine background check. We did an incredible 5 day beach trip with our best friends in Brazil and had an unforgettable time (still planning to post on that trip!). And then, in the blink of an eye, we were in November. We basically spent that month spending time with our friends, going out to all of our favorite places a final time (or two) and then trying to pack bags for the boys and me for an indefinite amount of time, that we estimated would be about 3 months. Slightly overwhelming. But we did it. 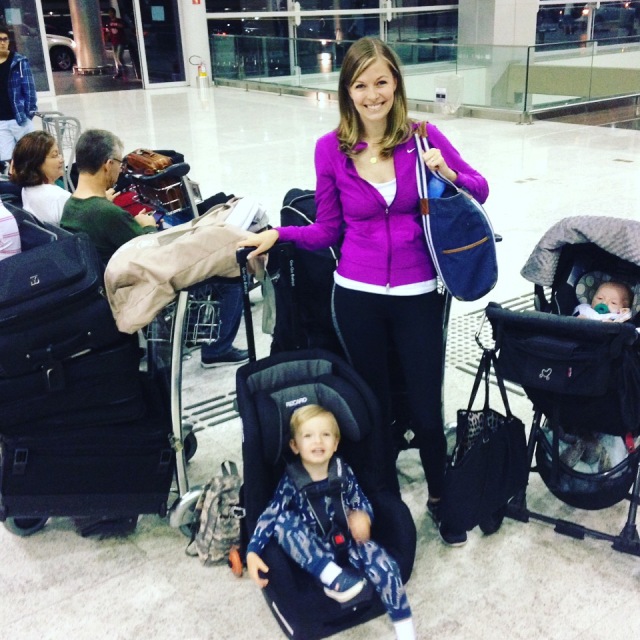 We spent Thanksgiving in Arizona since Michael was in one of his best friend’s weddings that weekend. It was a magical but whirlwind week in Phoenix celebrating Thanksgiving + an Indian / Vietnamese / American wedding. After that Michael returned to Brazil to work and to get our apartment packed up, etc. and I flew with the boys to South Carolina (my first flight with both by myself!).

At this point, we had only looked at houses online but were hoping to buy a house in Arlington or Alexandria. Michael and I had booked flights to meet each other there mid-December and then we would return to SC for Christmas, but after a few days in SC, my mom and I decided to just throw the boys in the car and drive up for the open houses that weekend. It was a total whim, last-minute decision but on Saturday, December 5 we packed up her car and told those sweet boys that we were going on a little adventure to find a house! 10 hours later we pulled into our hotel in Arlington and the next morning we started hitting the open houses. I had been especially compelled to come by one particular house that I was pretty convinced would be our home. We were the first ones in the door for the open house and as soon as we walked in the realtor told us that it had just gone under contract the night prior. I almost burst into tears. I would not have just driven 10 hours with a 3.5 month old and a 2.5 year old if this house was not available. It was all I could do not to cry but God, in His grace, gave me faith that He had other reasons for us to be there. We continued to look at other houses on my list and it was disappointment after disappointment, until… we came to OUR HOUSE! I instantly fell in love. It had just gone on the market and offers were due in 2 days. Michael would be arriving in DC in 9 days. Too late. That night my mom and I did the 10 hour drive back to SC and by Tuesday we were under contract. It was pretty stressful to buy a house apart from Michael – especially since he had never even laid eyes on it!! but even more so because it was a competitive situation with 10 offers… Plus Michael was really busy with work and was in the middle of getting our apartment packed up in São Paulo so he hardly had time to even think about it all! So when Michael arrived in DC on December 15 to “look at houses,” he was actually able to go to the home inspection! I left Colt with my mom so Finn & I could meet Michael up here and we were finally able to see the home together. I was SO relieved when he said that he loved it as much as I did. Maybe more. 🙂

Next we flew back to SC where we spent a lovely Christmas and then it was out to Arizona for New Years and Finn’s baptism which was made extra special as my parents, grandparents, aunt and Finn’s godparents (Trent & Paige Hudson) plus their girls all joined Michael’s family for a weekend full of fun! The Harpers were the most gracious hosts and we had an awesome time together (post coming on this as well!).

After Arizona, Michael went back to DC to work out of Jones Day’s DC office and I went back to SC with the boys. At this point I was fully engaged with trying to figure out how to furnish the house that we had just purchased. We had sold a lot of our furniture in Brazil since most of it didn’t seem like it was worth paying to move anyway. We did ship a few furniture pieces along with our dishes, other kitchen items, clothes, toys, etc. but we really had no idea when to expect its arrival (Brazil customs can be quite unpredictable and we had heard anywhere from 3-4 even 5 months). We would close on the house mid-January but rent-back through mid-February so I did have some time.

The second week of January Michael bought a minivan for us and then drove it to SC to visit us for the weekend. (Another big purchase that was a little stressful to do without the other person. Also, we are now minivan owners and I’ll never go back. At least not while I have kids in carseats. So, pretty much never.) The third weekend of January was MLK weekend. Michael trained from DC to NYC to see his brother and some friends and I left Colt with my mom and took Finn on a fun weekend trip to Denver where I met up with 5 of my São Paulo girlfriends who are now spread out all around the country. It was a blast to be reunited! Then I returned to SC and Michael returned to DC. A couple of days later he flew back to Brazil to do a final close-out of his work at Jones Day and I *brilliantly* decided that this was the time to potty train Colt… More on that later but let’s just say that doing it without Michael, while I was nursing Finn 5x/day, on month 2 of living out of suitcases…not the best idea. My mom is a saint but I still have PTSD and he’s still in pull-ups…

Finally February arrived and Michael had officially completed his work with Jones Day. He came to SC for a couple of days then we all flew to Arizona to visit his family for a fun-filled week in Phoenix and Hidden Valley. Then we were back to South Carolina for one more week until we packed everything into a U-Haul,

drove for 12 hours (a potty training child + a U-Haul trailer attached make the drive a little longer…) up to DC. We arrived around 3am, spent the night in a hotel and then on the morning of February 18, almost exactly 3 months from the day I left Brazil, we finally arrived at our new and totally empty house. It was pretty empty for a week which was really strange to live through but we used that time for me to paint Colt’s room and get our basics settled. We had borrowed some sheets, towels, blankets, dishes and cookware from my mom to survive. Little things were delivered day by day but during the second week we had a big Ikea delivery (read HOURS of assembly – Michael is a now a total pro), our shipment from Brazil arrived AND a big furniture order that I had placed for some of the more major items arrived as well. It was pretty overwhelming trying to get settled without having any help with the kids. I mean, at this point I was nursing Finn 4-5x/day and feeding him solids 2-3x and Colt is awesome but he’s still a 2 and a half year old boy… Michael and I were just in constant motion. We would wake up each morning so stiff, sore and exhausted, but knowing we were one step closer to the end. (Praise God that at least our kids are good sleepers!)

Then, on top of all the hectic craziness going on in our lives, after Michael officially left Jones Day, the DOJ calls to inform him that due to his time abroad, the background check portion was going to be a little different for him and would probably last about another year… We were pretty thrown off by this but were very thankful when Jones Day quickly said that they would be happy to have him back. He is working out of the DC office with regular travel to Brazil so that he can remain a part of the team down there as well. Although it was a curve ball, we already see it working out this way for the best.

Anyway, here we are now. Eventually we were able to get (mostly) settled into our home and I can’t even begin to express how good that feels. I’m lighting candles and drinking wine or tea every night just feeling very zen. 🙂 One of the best moments was hanging up all of the kids’ clothes in their closets. After living out of suitcases for 3 months, constantly packing and unpacking and repacking again, it was like taking a deep breath.

Michael’s parents came to visit for a couple days which was great and then he finally started working again on Monday. My dad was actually in town for a couple days right when our shipment arrived so he was able to swing by and see the house and the boys for a little bit but my mom hadn’t been here yet (not since she saw it with me while house-hunting!) so she came up to visit for the week. Michael is traveling to Brazil next week for work so we decided I’d take the kids to SC for the week and Michael will just meet us there and we can all drive back up together on Easter Sunday evening. And then starts real real life. Where Michael is working and I am home with the kids. In our house. In America. With our minivan.

And I’m just so thankful to now be writing all of this on THIS side of it all. It literally feels like we climbed a mountain and are coming out on top, looking at this new beautiful view of the new chapter we have here. And we are so thankful for all that God has already given us in and through this and we so look forward to living in the normal days of life ahead.

8 thoughts on “The Storm”